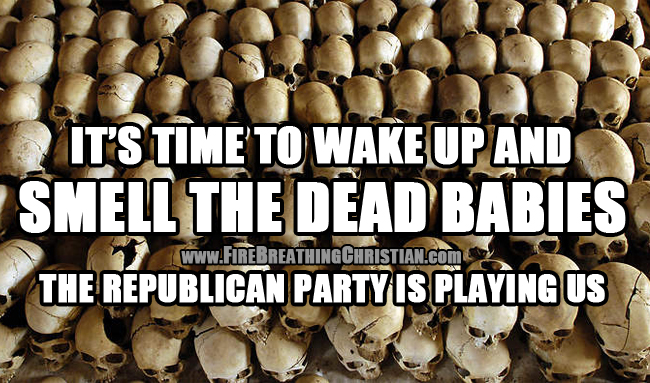 After 40+ years of “legal” mass child sacrifice for convenience in America, it’s time for Christians to wake up and smell the foul truth that we’ve been played like cheap fiddles by the Republican Party and other Pagan Political Right tools when it comes to protecting – or  not protecting –  the most vulnerable among us from being systematically murdered on a scale and in a manner that would make Dr. Mengele blush (see: 51,000,003 reasons why America owes Nazi Germany an apology).

Even so and right on cue, with yet another presidential political cycle upon us, we’re being treated to the latest crop of System-serving Statist GOP President wannabes dolling out the same ol’ rhetoric, gushing “pro-life” platitudes in pursuit of the passion, dollars, and votes of the long-misled masses. (See: Just in case you still think Republicans are ever going to actually stop abortion…)

The “hot button” nature of the child sacrifice issue (not that the GOP or its most popular tools would ever really refer to abortion as “child sacrifice”) is a little hotter this time ’round in the wake of a series of Planned Parenthood expose videos that have been released over the past several months. It’s worth noting here that these videos have clearly chronicled many well-beyond-Nazi-Germany level evils, including:

Tragically, this list could be much longer…but you get the point. In these videos alone, God has delivered a stunningly clear indictment. We are way beyond even the most remote, flimsy claim to even the sketchiest of excuses for our allowing this to go on and on and on in the name of All-American-style “law” and “freedom”.

We’ve been given more than enough information to act. Truth be told, we’ve had more than enough information to act for decades now; from the beginning, actually. God has graciously given us many times more by way of revelation than any sane people would require to act clearly and decisively to end the “legal” sacrifice of children for convenience in the name of “freedom” and “liberty” in America.

But we will not do it.

We can’t even settle on defunding this wildly satanic construct.

The “argument” as it is being framed by the System and its tools centers on merely publicly defunding this most rank and vile of ongoing atrocities…and we can’t even get the System to do that.

So normative – and so protected by both the Pagan Political Left and the Pagan Political Right (two wings of the same Pagan Dragon) has the “freedom” and “right” to child sacrifice become in America that we can’t even succeed in removing taxpayer funds from fueling its practice.

To suggest the outright banning child sacrifice in America is seen as a silly proposition. It’s “extreme”. It’s “politically unviable”.

Try saying anything about prosecuting those who practice such obvious, openly satanic evil as child sacrifice in America and…well…you are likely to be portrayed as the one who ought to be aborted. (See: Defunding Mass Murder Is Not Enough (#ProsecutePlannedParenthood).)

That’s how enslaved to sin the “land of the free” is now.

That’s how proud and lost “We the People” have become.

The same old campaign lines are trotted out time and again to great effect, with “bold” stands for life taken again and again and again…while the babies just keep right on dying at a rate of 1,000,000+ each and every year here in the “land of the free” and the home of the self-described “brave”.

Yet we all know that if ISIS did to one American child what Planned Parenthood does to millions, we’d be led by the GOP establishment by the nose off war anywhere on the globe to kill ’em for it. Yet we use our armed police to protect the “legal” baby massacring businesses scattered all across the fruited plain?

Think of it this way: Does anyone really doubt that if Planned Parenthood butchered pensions and savings accounts instead of babies, we’d kick into super-serious, high-gear mode immediately, demanding that justice be done now. It wouldn’t take us 40+ days to get that done, much less the 40+ years that we’ve compliantly played along with the “right” to child sacrifice in America.

It should be apparent by now that the only way that this mind-blowingly wicked situation is likely to ever be addressed within American borders is for a local magistrate at a State, County, or City level to simply stand up against the part of the hierarchy of authority between him and God that has abandoned true law and has thus required such interposition on the part of a God-fearing lesser magistrate. (See: What would a Christian State Governor do about Planned Parenthood and Gay “Marriage”?)

What we need now is a County Mayor or State Governor to stand, lead, serve, and protect in accordance with true law. (See: Presuppositional Law: Where we begin with law determines where we end.)

This is the beautiful biblical approach to civil government that generations past understood so well…which is why the State has been dutifully programming its marks to avoid or oppose the concept at every turn. (See: Statism 101: State-run “education” makes a State-dependent population.)

Lord willing, repentance and restoration will soon come to part or all of the land now known as America…ideally before we comfortably sacrifice yet another million of our own children on the altars of convenience, ease, and profit.