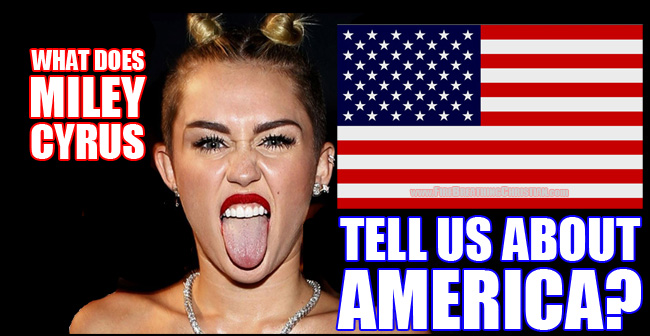 Is there any doubt that Miley Cyrus is a shimmering, shouting gift from God to America?

Is there any doubt that Miley Cyrus is at this moment being used by Him to provide a level of clarity and warning well beyond anything we could possibly deserve at this point as a people?

The latest evidence for Miley as a God-given cultural wrecking ball/loud-mouthed canary in the coalmine combo comes by way of her reportedly planning a concert event that would have her, everyone on stage, and everyone in the crowd completely nude.

This is where things like “freedom” and “liberty” inevitably lead when severed from subjugation to Christ…which is precisely how Americans have been programmed to understand and pursue those concepts (and most others) for many generations now.

As Us Weekly reported a few weeks back:

Just when you thought Miley Cyrus couldn’t get any more naked on stage, the Disney alum, 22, is reportedly going to be performing in an entirely nude concert — audience included.

Wayne Coyne, the lead singer of the Flaming Lips and Cyrus’ longtime collaborator, made the announcement on Instagram on Tuesday, Oct. 13 . . .

Fox News, the Pagan “conservative” outlet favored by vast swaths of American evangelical Christians, closed out its report on the potential event with the following cutesy, unconcerned note:

Cyrus has yet to confirm the concert, but she will be touring with the Flaming Lips this fall. So if you’ve ever wanted to go to a concert featuring an experimental young pop star and an aging ’80s band while being completely naked and surrounded by strangers, we’re betting this is your lucky day.

Obviously, Miley Cyrus and events like her potential all nude concert offer up a target rich environment for good and proper criticism.

What I’d like to encourage here is skipping over the more salacious details and easy shots at Ms. Cyrus’ character and instead focus on exactly what the ongoing trainwreck-in-slow-motion that is The Miley Cyrus Show tells us about…us.

What does the “legally” protected promotion and operation of things like Cyrus-style “entertainment” tell us about our approach to law, culture, art, and business?

How does our All-American approach to law, art, and business comport with the true, binding, unbreakable Law of God as perfectly, lovingly revealed in His Word?

How has setting aside (and openly repudiating) the Nature of God as revealed in His Word as our basis for law, economics, art, and culture served us? How’s it working out? How are we doing under this Law-dismissing (aka “lawless”) approach?

And if  God is real – if His Word and Law is what He claims them to be – what can we expect as a people as we cling to these Christ-dismissing approaches to law, business, government, art, and economics? (See: Presuppositional Law: Where we begin with law determines where we end.)

Thank God for His perfect use of Miley Cyrus. Let us pray that it ultimately includes her broken personal repentance and restoration.

Through Cyrus and many like her, God has graciously provided us with far more evidence and far more warning than any nominally rational mind could possibly require.

He has removed all of the excuses with which we love to clothe and justify our rejection of His crystal clear Word.

He has left America and even it’s most “conservative” defenders naked…in ways that Miley never intended.