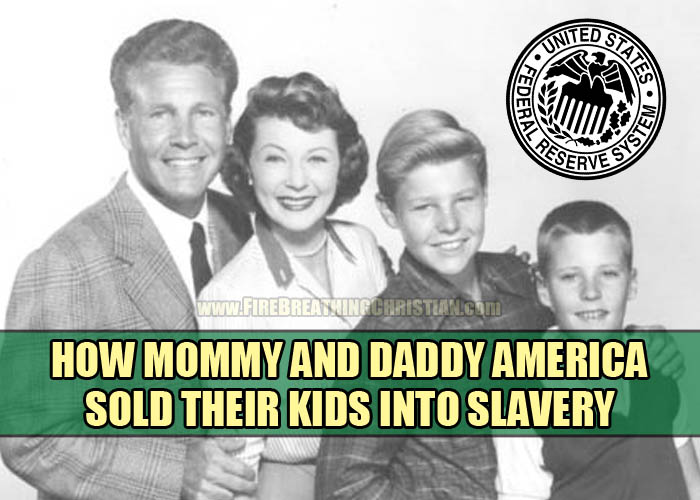 “A false balance is an abomination to the Lord, but a just weight is his delight.“

Have you ever stopped to wonder why the most glaringly obvious foundational problems with what we call American culture seem to be the very issues most diligently ignored by the vast majority of politically active “conservative Christians” in America? We’ll argue endlessly and at the drop of a hat about the latest tweet or comment from a major political party figure or proposed changes to tax rates or Supreme Court prospects or whatever other red meat item our favorite talk radio host pitches down our always open gullets, but we never seem to have any appetite whatsoever for dealing with the root causes of problems.

We never seem to want to ask, much less explore, the questions that are most in need of being asked and explored.

You know, like “is the American fake money system that props up everything from rigged American businesses and the American welfare state to the massive American military industrial complex and its endless global wars actually good or evil?”

Or howsabout this: “Is it wise to have the American State educating American children in an explicitly anti-Christian manner? Won’t that make every generation more State-deferring, State-dependent, and anti-Christian than the last?”

Or what about the ultimate question that should be the starting point for every Christian thought on every political issue: “Is the Word of God our standard for understanding and pursuing law, economics, politics and everything else…or is it not?”

Instead of starting conversations (and movements) around these sorts of questions – as our long forgotten/derided Puritan/Pilgrim forefathers did – American professing Christians have for generations now grown increasingly comfortable in avoiding tackling the central truths of law, economics, and politics head on.

Since this approach hit a high gear on the economic front around 100 years ago, each successive generation of Americans has been sold deeper into bondage to the Corporate State by past generations of Americans who have enjoyed the temporary benefits of a fundamentally evil approach to God’s creation of economics.

The Federal Reserve, the income tax, Social Security, Medicare, Medicaid…the list of “benefits” enjoyed by past and present generations goes on and on, while the cost of these “benefits” is being piled onto the heads of present and future generations at a rate and in a manner that we all know deep down will inevitably consign them to a level of debt bondage that will make them complete slaves to the Corporate State.

And it is pretty much ignored by even most “conservative Christian” Americans, who’d rather just keep pretending that it’ll all work out fine somehow in the end while they go right on enjoying the “benefits” provided to them by a State determined to usher their children and grandchildren into the darkness and bondage of complete State dependence.

In order to help awaken people from the purposeful economic ignorance perpetuated by the American Corporate/State-run “education” system, I want to share with you now a video series that I’ve found to be very helpful in laying out some of the basics of economic reality in a way that’s very easy to understand and appreciate.

The series is taken from Mike Maloney’s YouTube channel (which I highly recommend). It is a seven part series entitled “The Hidden Secrets of Money”.

In Episode 2, he presents what he calls the 7 Stages of Empire:

He then explains that at this time we are straddling stages six and seven.

Below you will find embedded links to each of the (currently) seven installments in this excellent series. Please share them with anyone who needs to see ’em.

Episode 3: Death Of The US Dollar On A Timeline

Episode 5: When Money Is Corrupted

Episode 6: DEFLATION: What You Need To Know NOW