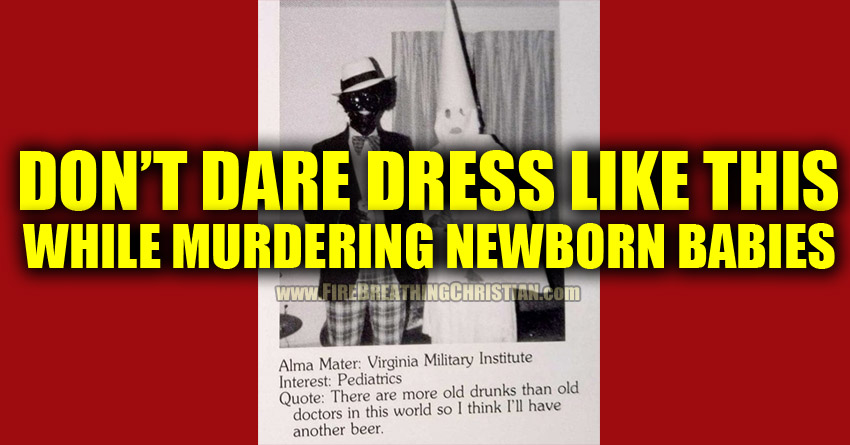 I guess since the “professionals” and “experts” employed in mainstream fake news journalism actually believe that Bruce Jenner is a woman, Global Warming is real (hear that, Chicago?), and that the measles are an existential, Ebola-like threat to mankind, it shouldn’t be surprising that the same corporate-programmed imbeciles also believe that dressing in blackface is worse – much worse – than openly advocating the murder of newborn babies.

Even so, it’s a bit jarring to watch media “pro” after media “pro” crank out the laughably idiotic Progressive Narrative on the Supreme Horror (!!!) of having dressed in a racist costume 30-ish years ago while, at the same time, spewing forth one of the other insanely destructive Progressive Narratives of the moment, that being: Baby murder is the sacred right of every woman and any man that said woman may choose to employ in the act of killing said baby.

Yet here we are, thanks to the amazing clumsiness and stupidity of Virginia Democrat Governor Ralph Northam, who was taking some heat a few days ago for openly advocating infanticide in the calm, cool demeanor one would expect from a pathological, murderous and/or demon possessed Progressive politician, but who was only really rocked to the point of serious political jeopardy when it was revealed that he had dressed up in a racist costume a few decades back.

We should definitely be open to killing inconvenient babies who’ve just been born. That’s a given. That’s Progressive.

But the blackface thing…no can do.

That must be punished, and with lethal force whenever possible.

Welcome to the Orwellian hellscape that is America in 2019 thanks to the insane worldviews cranked out relentlessly by politicians like Wortham and the idiot-drenched mainstream media that’s trying desperately to drag the entire culture down to their baby-murdering (while virtue signaling, of course) level.

Of the many off-the-charts crazy items on full display thanks to this episode, one of the craziest is the way that the “professionals” permeating mainstream fake news media are actually trying to pitch both Progressive Narratives at the same time. We’re being treated to wall-to-wall, rage-drenched coverage on the blackface thing, while at the same time the whole “let’s be open to killing newborn babies” item has mostly been reduced to background noise.

The “experts” in mainstream fake news – the same nutjobs that think Bruce Jenner is a woman (and insist that we think and speak the same line) – are now all about the business of “being outraged” not about the prospect of legalized infanticide today and on out into the future, but about the prospect of a Virginia politician having dressed in a racist costume decades ago.

This is Progressive morality on display, so it’s important that we take a close look at the demonic heart at the core of these baby murder advocates.

Politico unintentionally confirmed its status as part of the dangerously brainless media wing of the Progressive Inquisition in an article entitled “Trump fumes over abortion comments at SOUT preview meeting”, which began with the following bits of brilliance:

“In the middle of a State of the Union briefing for the White House’s closest allies Monday night, a fired up Donald Trump walked in.

The president appeared eager to give the annual speech Tuesday night in the House of Representatives, an occasion he has always enjoyed given its history and pomp and circumstance, said two people briefed on the meeting. But after acknowledging several supporters in the room, Trump went on for about five minutes about Virginia Gov. Ralph Northam’s recent comments about late-term abortions and “nonviable” babies born with fatal abnormalities. . . “

How bizarre! Trump was fired up over that?!

What a crazy, extremist, woman-hating bigot!

“In the company of several conservative leaders — including Tony Perkins of the Family Research Council and Marjorie Dannenfelser of Susan B. Anthony List — Trump marveled that public officials were discussing already-born babies as part of the debate over late-term abortions. His brief diatribe left attendees with the impression that Trump viewed Northam’s comments as outrageous, and the situation the governor described as akin to murder. . . “

Murdering a baby is “akin to murder”?!

What kind of crazy talk is that?

Why is Trump so upset about murdering newborn babies when this whole “guy dressed like a racist 30 years back” story has broken. Clearly, the Racist-in-Chief is trying to distract from a major issue by pointing to a tiny, fringe thing like infanticide advocacy.

Can Trump possibly get more racist than this?

The Politico quackery rolled on:

“Trump did not, however, mention the recent scandal about a picture in Northam’s medical school yearbook that featured an individual in blackface and another dressed as a KKK member. Although Northam says he is not in the photo, the governor is still facing bipartisan calls to resign.

The White House press office did not immediately respond to a request for comment. . . “

So the President was only fired up about the infanticide advocacy thing and didn’t say anything at all about the racist costume from yesteryear that we’re all supposed to be obsessed with right now?

And that, in a nutshell, is the Mainstream Fake News Media take.

Which is precisely why they’re not long for this world.