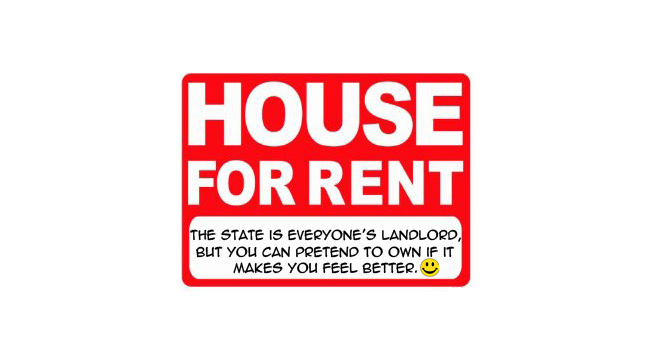 Remember when you could actually own a home in America?

The answer is: No, you do not.

Even if you think that something like true home ownership was recently or is presently allowed here in “the land of the free” and the home of the NSA, you are simply wrong.

As with most of the ugliest realities defining modern America, State ownership of American homes is deeply intertwined with the State and Corporate use of what they routinely pitch to us as the “free public school system”.

As if building our concept of education directly upon the serpent’s approach to the pursuit of knowledge wasn’t bad enough for the minds and souls of our children and culture, we’ve managed to throw the notion of true home ownership on the burn pile, too. Actually, it’d be more accurate to say that we’ve sacrificed home ownership as a sort of necessary kindling wood to accomplish the greater fire of State-controlled children’s “education”, which then feeds the all-encompassing inferno of State-controlled everything.

What we’re talking about here is the primary funding mechanism for “free public schools”. We will save deeper examination as to why “free” things require funding for another time. For now, let’s just settle in for a sec and soak in the truth and terrible reality of…property tax.

Property tax – the primary means by which your local “free public school” is funded here in the “land of the free” and the home of the NSA – means, in essence, that the State actually owns your home, land, and all taxable property.

You are a renter from the State, at best.

Even if you owe no mortgage, you owe the State.

Every year, you must pay your taxes, or you will eventually lose possession of your “property”.

The State owns your home.

The government owns your home.

All so that it can provide you with glorious “freebies” like…*drumroll*…State-controlled children’s education.

Probably so, as long as the State-controlled “education” and Corporate-controlled pop-culture in which you’ve been purposefully immersed for your entire life is successful in determining the foundations of your worldview and way of life.

They are happening purposefully and systematically, with the multi-generational vision of the serpent guiding them along in what at least seems for now to be an effortless march from cultural victory to cultural victory en route to complete cultural dominance.

Proud idolatry of America itself has been fomented and deployed to blind and lead even the “conservative Christian” right into enthusiastic support of Statism. In their unwillingness to subject American tradition, history, and patriotism itself to biblical scrutiny, they have been led along by the nose in promotion of a State that is utterly opposed to biblical truth and even most professed values of “conservatives”.

How many planks of The Communist Manifesto are embodied in the American implementation and celebration of State-controlled children’s “education” alone?

Once upon a time, that would have bothered most, if not all, Americans.

But not anymore…and not for a loooooong time now.

American State-controlled children’s “education” inherently means increasingly pro-State children overall. That much should have been obvious from the start, yet even now the culture is loaded with proud, patriotic, denial of even the most obvious of connections and realities. Score one for Marx. And the serpent, of course.

Generation after generation has been programmed by these secular, serpentine systems to the point that now most elderly “conservative” Americans cannot fathom (or abide by) serious critiques of the American State and most young Americans cannot fathom a world in which the State doesn’t own, control, and determine everything of significance for its people…all for their own good, of course. These are the multi-generational consequences of a proud people rejecting Christ as King in practice.

Young men and women of today have inherited an absolute nightmare from preceding generations of enablers and game players. The generations who founded and reaped the unbiblical benefits of any number of inherently impossible to sustain Socialist schemes (like Social Security, Medicare, Public Schools, etc.) are now on the verge of heading off into eternity, leaving us behind to deal with this mess.

How we choose then to “deal with this mess” is vital.

Will we repeat the failed approaches of the past? Will we keep pouring our energies and playing the controlled political games purposefully designed to lead us ever-closer to the total tyranny of the State Will we keep trying everything but the Gospel-fueled Great Commission as our one and only true path to real cultural restoration?

Or will we finally repent, believe, and obey…pursuing that Great Commission so that one day we here in this land will once again actually insist on training children in the essential, life-enabling “fear and admonition of the Lord”?

I believe that we can and will find our way to that place in this land once again, by His grace and for His glory.

But only through repentance and submission to Christ as King in practice.

Only then will our serfdom to the Corporate State and its “money”-printing elites end.

Only when we repent and repudiate the profound delisions and destructive behaviors that we’ve personally indulged and enabled will we finally be on that path to true cultural restoration…one supernatural salvation and act of obedience at a time.

And, along the way, we will even be able to own homes again.