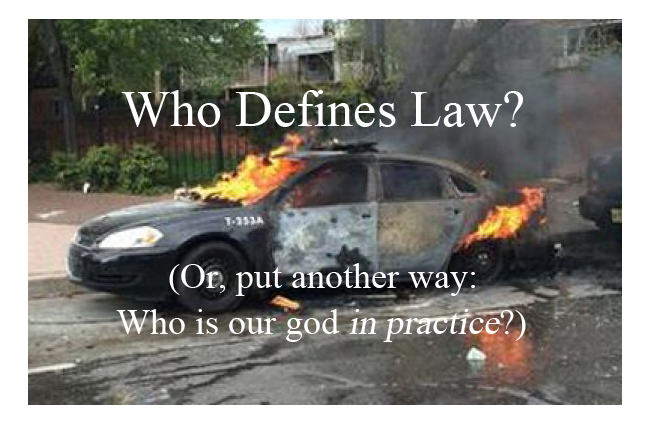 For those of us marveling at the latest wave of carnage rolling through Baltimore as America continues its unrepentant embrace of true lawlessness, please consider the following:

The answer to all three of these questions is easy: No.

These things are not legal, regardless of what anyone here on earth may think, feel, or imagine to be the case.

But, for most professing Christians in the land, such an approach to law and civil government sound far too un-patriotic and un-American to possibly be true. And, after all, any supposed truth of Scripture can only really be true and applicable here in America if it first passes the test of American standards, traditions, and feelings, right?

Yet the biblical account of reality – true, binding reality right here and now, even for America – is quite clear in that God’s Law cannot truly be broken; unrepentant rebels can only succeed in breaking themselves upon it, as we are doing now. It may take hundreds of years for the fruit of rebellion to bloom, but that fruition is inevitable. God is not mocked, and His Nature is binding.

Human legislators, kings, dictators, and wannabe gods have no power to annul the Law or alter it in the slightest little bit. God’s Nature as reflected in His Law is the binding reality in which we all live. However much they (and we) may want to imagine or suppose that the Law of God can somehow be overturned, replaced or even tweaked around the edges, this belief is the epitome of madness. It is the insanity of pride on display.

And we, as Americans, are witnessing the full, open display of our insanity even now.

Even the vast majority of “conservative Christian” Americans have no appetite to measure and consider things such as law, truth, politics, and civil government in such a context, having been lead instead to idolize America itself in such a manner as to preclude acknowledging, much less addressing, the problem at the root of our cultural implosion: Sin. (See: The America Idol: How “Christians” Worship and Enable the Anti-Christ State)

Sin against Christ the King.

Not sin against “christian values”.

Not sin against “good moral principles”.

Not sin against “conservative values”.

Sin against Jesus Christ the King of creation, who is the living embodiment of all truth, including all truth in law and civil government.

Instead of submitting to the inescapable and increasingly obvious fact that the slowly (and sometimes quickly) unfolding death of America is a result of our proud rebellion against the one true God who will not tolerate the worship of another, we tend to instead happily play the games that the enemy would distract us with as our cities burn, our culture rots, and our children are consigned to the hellish Orwellian future that our beloved (Democrat and Republican) “leaders” will ultimately propose as the “solution” to all of it. We are on this path now – and have been for generations – because we will not repent of our sin against God.

We will not bend the knee to Christ as King in practice.

Oh, we want to claim His name and even go so far as to pray that He’ll save the day here and now for us, but on our terms, not His. We want Him to “save America”, but not as He defines such things as salvation. No, we want Him to “save” us instead from the consequences of our ongoing rebellion without our having to acknowledge and turn away from that rebellion (AKA “repent”).

When America declared that the worship of all gods was indeed a “right”, the course to where we are now was charted. When we decided that the source of all true and binding Law was an optional extra to be obeyed when we felt like it and discarded when our America idol said it was safe and good to do so, we secured the doom that we are witnessing now. (See: Openly reject God’s First Commandment? YES! WE! CAN!)

So, “American Christian”, whose Law will you strive proclaim and apply now: Christ the King’s or someone – anyone – else’s?

Will you repent and submit to Christ as King here and now in practice, and encourage others to do the same, or is your true king and lord someone or something other than Christ? Is an unrepentantly unbiblical American State too precious – to idolized – for you to let go of in order to cling to Christ and proclaim His truth?

The answer given to these questions will determine whether this culture lives or dies.

Either way, for true believers, there is nothing to fear and everything to gain. All of this sets the stage for nothing less than an incredible wave of opportunity to stand for and advance the Kingdom of God, all by His grace and all for His glory.