In Chaos for Glory: My Time With ACORN, BigGovernment.com‘s James O’Keefe begins with:

A famous community organizer once said, “The only way to upset the power structure in your communities is to goad them, confuse them, irritate them and, most of all, make them live by their own rules.  If you make them live by their own rules, you destroy them.” Impossible demands can irritate modern leftists in ways nothing else can, whether it’s by banning Lucky Charms cereal because it’s racist against Irish people, calling Planned Parenthood saying you want to donate money for black abortions in the name of Margaret Sanger, or making Sen. Snowe sign an oversized bailout check for a billion dollars to Amtrak, in her own office.

The scenario we posed the ACORN Housing employees in Baltimore is due to the application of similar power tactics. We gave ACORN a taste of its own medicine.  ACORN was alleged to be thug-like, criminal, and nefarious.  This criminal behavior was evidenced by a video of Baltimore ACORN community organizers breaking the locks on foreclosed homes.  Instead of railing against their radicalism, it is best to bring out this type of radicalism. Hannah Giles and I took advantage of ACORN’s regard for thug criminality by posing the most ridiculous criminal scenario we could think of and seeing if they would comply–which they did without hesitation.

The trick here has become getting the garden variety American Democrat to care. Ever since the Clinton-era Lewinsky dress episode shifted party defenders from a “that never happened – it’s all a right-wing conspiracy!” position into a more blindly devoted “who cares if it happened?” sort of mode, any mention of a sex-related offense attached to a Democrat candidate or advocate has been met with derision and disdain en route to dismissal.

A “who cares?” mentality is now pervasive on the left where such matters are concerned, not so much out of suspicion that any particular accusation under consideration is without merit, but because the advancement of the party agenda trumps any moral component that might get in the way.

See also: “Create a Godless nation? YES! WE! CAN!” 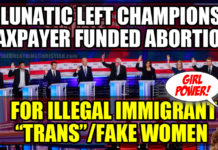