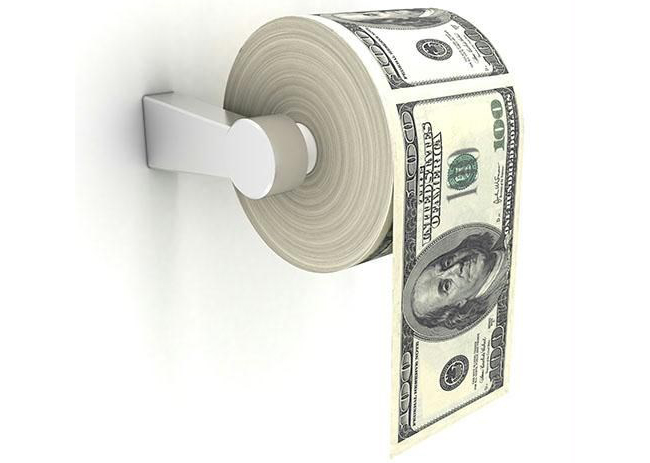 Amidst the raging seas of Ebola, ISIS, and perpetual war, there is one group of people who can still rest relatively easy, knowing that the systems in place will always and quickly strive to do everything within their power to “have their back”, saving them from even the consequences of their own recklessness, laziness and generally bad behavior.

These systems, quite unlike those assigned to “serve and protect” the rest of us, will actually work quite competently in their own weird way. They will function smoothly and effectively. They will aggressively and with great power move to preserve the safety and security of the protected class whom they have been designed to serve.

“Federal Reserve hints at extending quantitative easing programme as markets recover from another day of turmoil.”

That’s the line kicking off an article published by The Telegraph yesterday, and it’s the sort of thing we should note as Christians each and every time it comes up.

“Quantitative easing” is a wordy term for “printing money” – “money”, as in the fiat currency that an elite few can create out of thin air and then use to control and effectively own everyone and everything beneath them.

One of the ways that the very few at the very top of this abomination (see: Proverbs 11:1) are able to keep their slaves and property in line is to keep a large layer of happily complacent folks between them and the increasingly struggling masses being crushed under the bottom of the Ponzi Pyramid. In order to keep that cushion of happy defenders of fiat slavery in place as the system they are defending begins to buckle under the weight of its accumulated debt and denial of God’s reality, they are forced to more and more frequently turn on the spigot of Monopoly money in order to flood/”save” the market by inflating (or re-inflating) asset bubbles (aka “asset values”) so that those who own homes or stocks or similar assets are provided with the pacifying illusion of wealth.

Prices that were once stagnant or going down suddenly and miraculously bounce back upward and everyone who owns the stock, homes, or similar assets is very, very happy.

The last thing they want to do is question the system that continues to treat them soooooo well.

As for those whose “assets” consist only or mainly of things like bread, water, and milk, well…those people are plunged deeper into the pit of economic hopelessness and slavery with each wave of Monopoly-money print runs aimed at balling out “too big to fail” businesses and their “can’t lose” investors.

With each print run of “magic money”, the fiat currency in question is further diluted and its real purchasing power is, ultimately, weakened. This is called inflation, and it is the mechanism by which the US dollar has purposefully lost over 90% of its real-world purchasing power over the last 100 years of Federal Reserve “management”. The consequences of Monopoly money printing can take time to unfold, but the long term trend and impact is completely unavoidable, as has been the case with all such fiat currencies throughout human history. In this, God’s disdain for and condemnation of this approach to economics makes its practical application inescapably plain…well…unless you’re benefitting from it personally and just want to pretend, I suppose. Sinful men have no limit to their capacity for denial and self-delusion. Yet, whether they want to acknowledge it or not, God has indeed made these things plain and everyone who is responsible for perpetuating this economic nightmare will be judged by Him based upon His standards. For those of us being economically crushed so that the “asset values” of a few can be artificially propped up, there is great comfort to be taken in this truth. Vengeance is the Lord’s…and He will have it.

Here’s one more example to help nail down this important reality of our present abominable economic construct:

Bob and Martha, who own a home and lots of stocks, are happy each and every time the Fed steps in to artificially prop up the perceived value of their stuff, whether they even know what the Fed is doing or when they are doing it or not. When market begins to slow, asset values drop. Then the Fed steps in to “fix” it.

This is what they do, and this is what they will keep right on doing, especially now that the ravages of Ebola and ISIS are on the verge of significantly impacting the economy.

“Too big to fail” businesses and banks never have anything to fear, really. They rarely if ever pay the price for their recklessness. Their “investors” are then similarly removed from real-world risk and consequence. The fake money printers always have their backs.

This makes the job of “money manager” one of the most ridiculously easy non-job jobs in the known universe, as anyone with half a brain who is paying any attention knows that everything about this system is antithetical to free markets and free capitalism. The real risk has been removed from a select few, so investing in their “too big to fail” businesses is a no brainer. They will not be allowed to fail once they have been deemed “too big” or “too important” to do so by the powers that be.

So as the “asset values” of things like cheese, bread, and milk go up as a result of inflation, just remember: Inflation is not some sort of natural, inevitable phenomena. It is a purposefully deployed mechanism by which the money printers rob the enslaved masses at the bottom who cannot make their money out of thin air.

May God grace us with repentance of this wicked system, so that true freedom through truly free markets might one day exist here and the biblical work ethic might be promoted at every level of a thriving, restored, and God-glorifying economy.