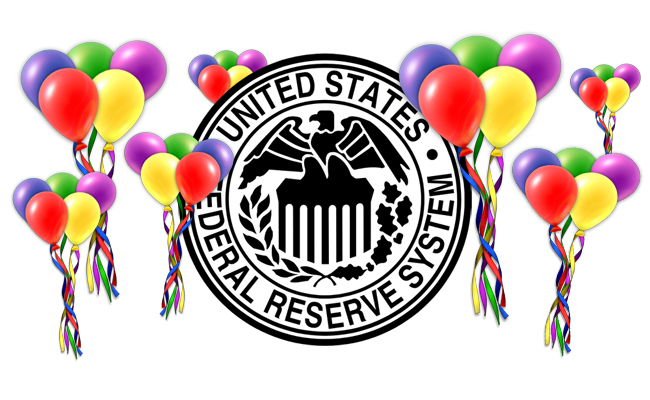 So how much “help” do the “free markets” need from the all powerful money-printing class in order for things like stocks and homes to have their present valuations preserved or re-inflated?

Bloomberg’s Simon Kennedy posted All the Markets Need Is $200 Billion a Quarter From the Central Bankers earlier this week, and I couldn’t help but share some quotes here, particularly in light of recent FBC posts like Why does God despise the US dollar? Here are seven reasons… and Fiat $lavery: We have been bought and paid for…with nothing. Kennedy does a fine job confirming the obvious ugliness and fraud at the heart of the Orwellian “free market system” under which we are being systematically controlled and purposefully driven deeper and deeper into the arms of an anti-Christian Corporate State:

“The central-bank put lives on.

Policy makers deny its existence, yet investors still reckon that whenever stocks and other risk assets take a tumble, the authorities will be there with calming words or economic stimulus to ensure the losses are limited.”

“To ensure the losses are limited.” Yeah, that sounds like a “free market” to me. And flying in folks from Africa is a good way to keep Ebola out of America, too.

“Last week as markets swooned again, it was St. Louis Federal Reserve President James Bullard and Bank of England Chief Economist Andrew Haldane who did the trick. Bullard said the Fed should consider delaying the end of its bond-purchase program to halt a decline in inflation expectations, while Haldane said he’s less likely to vote for a U.K. rate increase than three months ago.

“These comments left markets with the impression that the ‘central-bank put’ is still in place,” Morgan Stanley currency strategists led by London-based Hans Redeker told clients in a report yesterday.”

The same “trick” again and again…not a trick that you or I can play, of course, but the money printing class? Oh yes. They are our economic gods and slave-masters.

When the protected assets of the protected classes are in jeopardy, these gods spring into action, knowing full well that their status as gods is largely contingent upon the pacification and cooperation of these privileged and protected folks. Keeping them happy is very important, at least for now. The time will come, of course, when they too will be fed to the Statist beast, but, in the meantime, maintaining their apathy and compliance is a top priority.

“The reason for the support is the fear that a prolonged sell-off in markets would upend the fragile economic outlook central banks are charged with safeguarding, they said.

“With central banks much more concerned about a return to recession than about asset-price bubbles, they have little choice but to step back in,” said Citigroup.”

So the money printing class is not as concerned about asset-price bubbles as it is about maintaining the illusion of recovery and the illusion of wealth. (For those of you wondering what an “asset-price bubble” is, think: the popped Internet stock “bubble” of the early 2000s or the home value “bubble” of 2008.) Maintaining the “willing suspension of disbelief” where our fictional economy is concerned is a top priority of the Federal Reserve. And, for a while, they will be able to do so.

He will judge – and is judging – this system and every one of its advocates, defenders, and beneficiaries accordingly, and Christians should take great joy in that. Vengeance is the Lord’s, and He will have it. His judgment and the validation of His Word on economics (and everything else) is infinitely more certain and inescapable than anything any human “expert” might plan or strive to implement.

This truth should inspire us all the more to faithfully proclaim and apply the supernatural Gospel and Great Commission so that those who are at present unrepentant and supportive of this economic abomination (see: Proverbs 11:1) might, by the grace of God, repent and be saved.