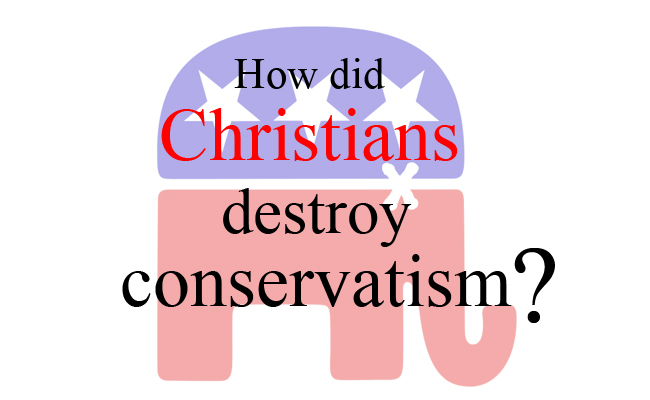 How did we end up with “conservatives” defending everything from Social Security and Medicare to State-controlled children’s “education”, which is straight out of the Communist Manifesto?

How did we get a supposedly “right wing” political movement in America that is effortlessly molded and mobilized in support of one explicitly Socialist/Marxist policy after another, all while most of its members actually imagine themselves to be doing just the opposite?

How were these “conservatives” led by the tens of millions to a place where they enthusiastically embrace an Orwellian Surveillance State at home and perpetual war abroad, all while continuing to chant objectively idiotic mantras about the “land of the free and home of the brave” in which they apparently still imagine themselves to live?

How did we get here? How did “conservatism” become so contorted and warped that it ended up as a banner under which nearly every explicitly non-conservative political concept imaginable was advanced throughout the culture?

Put another way, how did professing Christian conservatives become the most useful, active foot-soldiers for the enslavement of our culture to the explicitly anti-Christian forces of Statism and Corporatism?

As always, the answer to this question begins with and centers on the Church. Conservatism has become what it has become, and it has been used to help lead America to where she is now, because professing Christians in America have made an idol of their conservatism, their patriotism, and America itself. In doing so, they have only secured pain, darkness, and quite possibly death for all three.

So how did professing Christians in America destroy conservatism?

The same way that any sinful person destroys any good thing: By separating it from explicit connection to the nature of Christ the King.

And if there’s one thing that “conservative first” patriotic professing Christians have done to conservatism, it is separate it from explicit attachment to the Nature and Word of God.

Even the suggestion of a connection – much less an essential one – between our approach to conservatism (or politics, business, etc.) and the nature of Jesus Christ as revealed in His Word is likely to be met with wide-eyed indignation and repudiation…and that’s from professing Christians…at “good, conservative, Bible-believing” churches.

So clearly, we are in a very bad place.

Our culture on the “conservative” side often loudly proclaims Christ, regularly attends church, and even routinely reads the Bible, yet, when the rubber hits the road, they are as disdainful of the Lordship of Christ in practice as anyone. So it is that they, like all unbelievers, rather than seeking and submitting to Jesus as the actual ruler in every realm of creation right here and now, instead try to have the benefits of Christianity without Christ as King.

That, in a nutshell, is the typical American “Christian” conservative worldview today.

It’s proponents are all for “good morals”. They champion “common sense”. They talk and talk and talk about things like “wise”, “good”, and “beneficial” behavior…while looking to their favorite non-Christian icons to define these terms and everything attached to them.

They love “freedom”, “liberty”, and the like…again, all as defined by and for pagans of one sort or another.

They like to throw in Jesus and God vaguely here and there, and even imagine the “god” on the US dollar (itself an abomination; see: Proverbs 11:1) as being the one true God of Christianity. They love their Ten Commandments plaques and monuments in basically the same way that a garden variety pagan might love a lucky rabbits foot, but they despise and openly reject the First Commandment in practice, going so far as to cherish the American idol of “freedom to worship any god that one likes” as a virtue…and a right…a right, they say, given by “god”.

Here we see most plainly that this god of secular conservatism and secular libertarianism is not the one true God at all. It is a counterfeit. It is another god.

And that god rules what we call “conservatism” in America.

Until the true Church repents of past and present support of the Christ-dismissing system that now defines our culture and reclaims the Gospel-fueled Great Commission as the means by which we actively engage this world on every level, there can be no hope of true healing and restoration in the land.

Until the true Church actively applies the nature of Christ the King as defined in His Word as the standard by which we understand and enjoy things like conservatism, politics, education, economics, work, and art, we are destined for ever-increasing darkness and despair throughout our culture.

Until we tear down the idols and enemy strongholds of man-centered conservatism, we will never find our way to the truth, beauty, joy, and prosperity of Christ-centered lives, homes, communities and culture.

This country and its systems do not need more man-centered pragmatism. They do not need more advice or guidance from unbelieving “experts”. They need supernatural intervention by way of an obedient Church proclaiming and applying the Gospel and Great Commission of Jesus Christ in every realm of creation, as He has presented these things in His perfect, life-giving Word.

Conservatism in America is dead and rotting. It is waiting to be restored along with the rest of the wreckage smoldering around us.

It’s now up to the Church to lead the way to that restoration by the only true path available: Repentance and loving obedience to Jesus Christ the King.