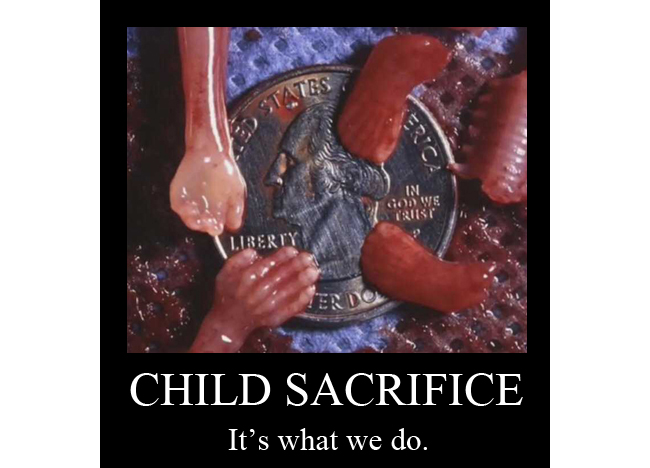 Child sacrifice is about as ugly – and as American – as it gets.

With “we the people” as god in practice, and Christ the King utterly disregarded whenever His crystal clear commands conflict with the desires, traditions and feelings that god, we have for generations been proudly set upon on a sure path to the wildest of blasphemies and most horrific of atrocities.

As of right now, it looks like we’re at least approaching the end of that path. After generations of material prosperity and relative strength on the world stage being mistaken for (and proudly paraded about as) the blessing and favor of the one true God, our cumulative rebellion against His Nature as revealed in His Word is finally beginning to come into full bloom.

A recent Breitbart report chronicled one of many recent steps into our special little American “liberty”-fueled hell. The article, University of Hawaii Carrying Out Controversial Abortion Experiments on Minors, relayed the horrifying – yet entirely predictable – news that the University of Hawaii “is currently recruiting pregnant girls and women to participate in second-trimester abortions to measure their bleeding during the operation, with and without antihemorrhagic drugs. According to the Clinical Trials website, run by the National Institutes of Health, participants must be at least 14 years old and 18-24 weeks pregnant.”

Is it wicked, vile, and evil?

It is all of these things, to be sure, but it is no less American.

Child sacrifice is what we do.

We do it more systematically, more openly, and more proudly than any other people at any time in human history. We murder children with a cool, calm callousness that would make Mao wince, and we sacrifice children to the Corporate State with a happy compliance that would make Joseph Goebbels weep with jealousy.

There can be no doubt: When it comes to child sacrifice at every level, we’re #1! We’re ‘Merica!

Each and every year here in the “land of the free” and the home of the NSA, we literally feed millions of our own children into the woodchipper of an American Corporate State sanctioned, publicly displayed system of mass murder and dismemberment that would make Dr. Mengele blush and the average Nazi’s head spin. (See: Why We Murder Our Children.) Those lucky kiddos who manage to avoid said woodchipper are then quite likely to be happily sacrificed (even by professing Christian parents) to the Corporate State through submission to an anti-Christ “education” system whose foundation and worldview is lifted straight from the serpent’s tongue. (See: Redeeming Children’s Education – Confronting our Satanic Approach to the Pursuit of Knowledge.)

And how did we get here? What happened to make all of this not only possible, but assured?

We rebelled against God…and loved it!

Somewhere between the Puritans and the Founders, we went off the rails in fundamental ways. Somewhere along the way – before even the formal foundation of the United States – we started down a path that would lead us to embrace as legitimate one of the most obvious, glaring, and destructive prohibitions in Scripture: The worship of false gods.

The enshrinement of the “right” to worship any god as both a God-given thing and an All-American virtue constitutes a remarkable conflagration of high rebellion concepts, when you stop and think about it biblically. There are so many ways in which this most cherished of Americanisms is an affront to God that it’s hard to list them all.

Once we decided that His Nature was not the actual, detailed basis for things like law, culture, and civilization, we were doomed to our present-day condition and the much worse that is right around the corner.

Just as our rejection of His revealed Nature as the basis for everything including law and government is the single gate through which all of our present misery and corruption has marched, so too is our broken, repentant return and submission to His Word in detail and practice our only hope.

That is the only answer.

Because He is the only answer.

Every political pundit, expert, party, and politician pointing to anyone or anything but Him as a real solution is only leading us further down the path to cultural oblivion and the inevitably subsequent tyranny of Statism.

There is no true law apart from His personal Nature. One way or another – either through our persistent pride and American idolatry or our broken repentance and submission to Christ as King in practice – we will validate His unbreakable Nature. We will confirm His unbreakable Word. America will come and go, but the Kingdom and people of God will endure forever, all by His grace and for His glory.

His Nature as defined in  His Word is not optional to life. It is essential to life.

Until and unless we are moved en mass by His grace to repent and embrace that life-enabling truth, we are as doomed as the children we sacrifice by the millions as a matter of daily routine here in the “land of the free” known as America.