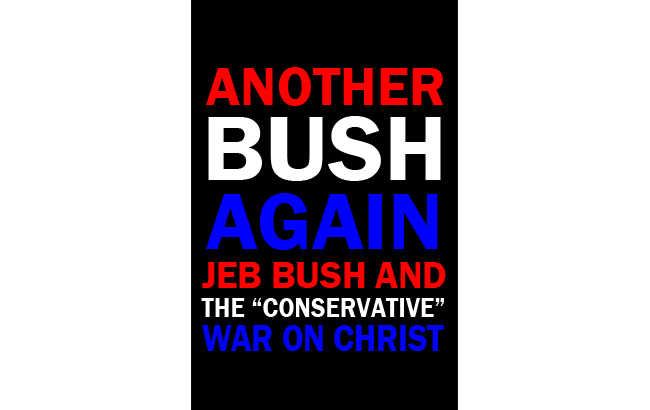 Ever wonder what it looks like when one’s politics defines one’s Christianity, rather than the other way around?

Ever wonder what it looks like when openly unbelieving voices like Rush Limbaugh, Mark Levin, and the hordes of Neo-Cons at Fox News become the sages, icons and prophets to which vast swaths of professing Christians look first, most and last for culture-shaping political direction?

If you are wondering, you really shouldn’t be; at least not in America. For tens of millions of politically active “conservative Christian” Americans, the notion of defining religion (including Christianity) by the light of secular (anti-Christian) approaches to politics, patriotism, economics and education is the norm. It’s a given. It’s just how things are done in “the real world”.

For these folks, Jesus is Lord somewhere “out there” in the future or off in Heaven or in their little hearts or at prayer meetings or in the church choir, but He is most certainly not King in practice right here and now over all things – including politics, patriotism and most other concepts that are cherished by many of those who self-identify as “conservative Christians”.

The “conservative Christian” distinction alone is anything but problematic in and of itself. It’s a perfectly legitimate term conveying  a perfectly legitimate worldview summary when used in a proper context. But the worldview that it is increasingly intended to convey (and justify) when used by millions upon millions of politically active professing Christians in America is a worldview in which Christianity – and Christ – play a submissive role to “conservatism” and the American State as they have been defined by the Pagan Right.

Thus, Christ as King in practice in the political, economic, business or patriotic realm right here and now is not a thing that these “conservative Christians” are into. Not at all and quite the contrary, actually. They tend to be inherently hostile to Christ’s lordship in practice over any realm that they’ve set aside and reserved for rule by their favorite unbelieving secular leaders.

The Pagan Right has thoroughly co-opted the hearts and minds of legions of professing Christians in America, so much so that now the “freedom of religion” (as in, the “freedom” to worship any false god you like) is now understood by the masses to be a “God-given” right and a virtue upon which American identity (and pride) are built and proclaimed throughout creation. The fact that God – the real One – openly despises and has explicitly forbidden the religious pluralism at the heart of the religion of Americanism doesn’t seem to phase these “conservative Christians” in the least. In fact, the more one shines light on this reality, the more these folks who define their religion in light of their politics seem to double down in favor of the very thing that God hates and has forbidden…all while claiming a love for Jesus and “Christian values” along the way, of course.

This is how wacky and warped things have become. Barring God-given brokenness and repentance on the part of these “conservative first” Christians, it’s only going to get worse.

This is the context in which we roll into the next contrived/controlled presidential election cycle.

This time ’round, the Republican Establishment is offering up, among other things, another Bush.

We’ll get into more Jeb specifics in future posts, Lord willing. For now, it seems like a good idea to note and contemplate Jeb Bush’s predictable regurgitation of the tried and true Pagan Right pitch on things like religion, freedom, liberty and Truth.

To that end, we turn to a piece run last week by McClatchy titled, Bush courts evangelicals, defends religion in public life:

Looking to win over skeptical evangelical voters, Jeb Bush pushed back Saturday against what he said are modern intrusions on religion as he lauded graduates and their families at Liberty University, a Christian college popular on the path to the Republican presidential nomination.

“Fashionable ideas and opinions – which these days can be a religion all by itself – have got a problem with Christians and their right of conscience,” Bush told an audience of 34,000 in the school’s football stadium.

First off, it’s important to notice the purposefully vague appeal to “religion”. The Pagan Right has done a masterful job of convincing its followers – many of whom claim Christianity – that “religion” is a synonym for “Christianity”. It’s never quite stated as clearly as that, of course (that’s the point of being purposefully vague), but, at the end of the day, the Pagan Right is advocating for Islam and Allah the same treatment that it is advocating for Christianity and Christ. The appeal to “religion” is always made based on the American assumption of religious pluralism as a virtue, and in direct contradiction of the Word of the living, ruling God, which makes plain that He despises and will punish religious pluralism.

The phrase “right of conscience” is also interesting for a variety of reasons, perhaps most notably the fact that it appeals not to anything resembling the objective fact or truth of Christ as God and the reigning King of His creation. Instead, it appeals to that favorite “right” of the religious pluralist, that being the “right” to believe in and worship any way – and any god – that you like.

So we see where all of this “defense of religion” is going. (Hint: The same place that the Pagan Right has always had it going – in defense of religious pluralism and in opposition to God.)

Just in case you had any doubt, the following line makes plain once again the Pagan Right religious switcheroo:

“That makes it our problem, and the proper response is a forthright defense of the first freedom in our Constitution.”

For Jeb & Company, the State is god in practice. For Jeb & Friends, religious pluralism is a virtue. And for the “conservative Christians” under sway of Pagan Right thought, nothing could be more “reasonable” or “right” here in the land of the free and the home of the NSA.

George Bush, George W. Bush, John McCain, Mitt Romney, Mike Huckabee…the list of Pagan Right “leaders” past and present goes on and on and on with proponents of American Statism and religious pluralism – both of which God despises.

One of the manners in which God has consistently punished a disobedient people is by way of wicked leadership. With every embrace and advocacy of a Pagan Right “leader” by professing Christians in America, those professing Christians lead the way in earning the wrath of God that is even now pouring down upon us.

Do you really believe that the Pagan Right will ever make a meaningful, biblical, uncompromising stand in defense of the Family?

Do you really think that the Pagan Right will ever make a meaningful, biblical reduction in the power of the State?

Do you really believe that the Pagan Right will ever remove children’s “education” from the controlling hand of the State?

Do you really think that the Pagan Right will ever make a meaningful, biblical defense of the sanctity of sexuality?

Do you really believe that the Pagan Right will ever make a meaningful move toward biblical economics in place of the abomination that is in place now? (See: Fiat $lavery – We have been bought and paid for…with nothing.)

Because the Pagan Right will never repent and submit to Christ as King in practice.

(Hint: This is why they are the “Pagan” Right; they may claim Christianity when convenient, but their worldview in application is obviously and thoroughly Pagan in nature.)

Until the Pagan Right is broken into repentance and submission to Christ as King in practice, they can and will only lead all who follow them deeper and deeper into darkness, despair, and death.

Christ as King is not merely the answer for some “out there” place in the future or “in our hearts” or in the privacy of our homes and church buildings. He is the one true hope and the inescapable, binding reality of every realm in His creation. And yes, that includes 2015 (and 2016) America.

Live, act and vote accordingly. You will give an account.

(See also: How to truly love (and really save) America.)