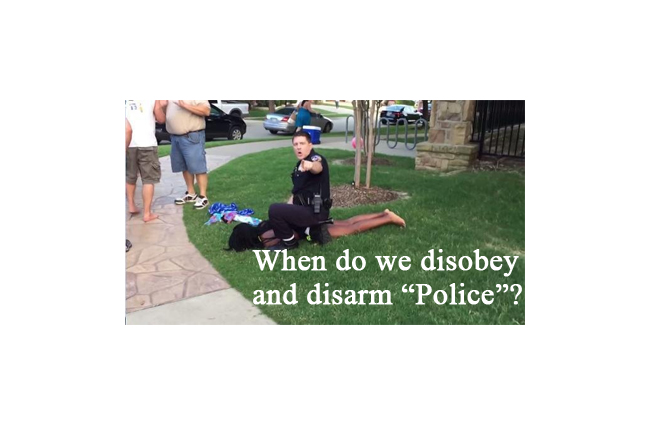 In a Police State, when the Police speak (or beat or tackle or shoot), you don’t challenge them. You simply conform to their will and obey.

You don’t think for yourself in that moment. You don’t critically evaluate what one person is doing to another when the one doing it is wearing a badge. And you certainly don’t act out in resistance to or correction of the behavior perpetrated by the one wearing the badge.

You just listen for orders from the Police and you do as you’re told. You obey.

Whatever the Police deem must be done, you let them do.

That’s how things work in a Police State, where the State is god in practice and the armed enforcers of its (ever-shifting) standards of “justice” are to be just as revered, respected and feared as the “god” on whose behalf they have been armed, badged and uniquely protected from “legal” consequence. (After all, they might have to – you know – get brutally lawless with folks for the sake of making them obey, um, “the law”.)

That’s also how things now tend to work in America as well, confirming its condition as an emerging Police State again and again and again. (See: The State as God in practice: How we currently evangelize through government, law and education.) 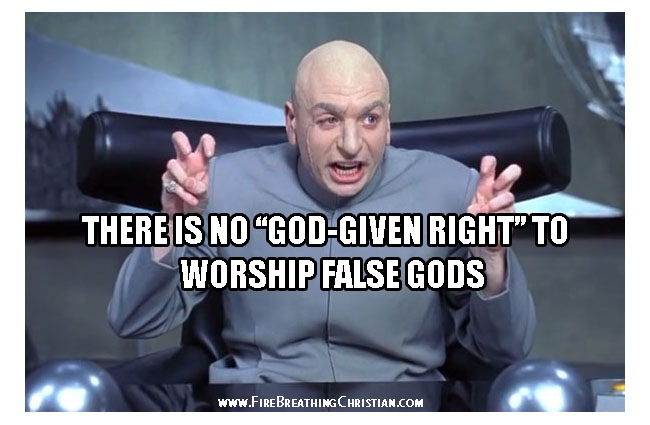 The recent case of Corporal Eric Casebolt’s assault of a young black woman in McKinney, Texas, has re-re-re-ignited a flame that only seems to be intensifying with each recorded act of apparently wild misconduct on the part of those given guns, badges and the power to do what sure seems like pretty much anything they want to do with relative impunity (at least in the moment).

Before we go any further, please let me make plain that I have had and continue to have dear, trusted, honorable friends who work (or have worked) at some level of civil government in the role of “law enforcement”. While I am greatly concerned about the manner in which we understand and pursue the concepts of law, policing and law enforcement in America, I am in no way disputing the honor or integrity of all present day Police or “officers of the law”. My aim is not to disparage or discourage all Police. To the contrary, my hope is to encourage everyone – Police included – to actively pursue a biblical understanding of law and law enforcement so that we all might better use our individual talents and passions for justice in a manner that conforms with the Word of God. We all need and benefit from that Christ-centered approach to law and law enforcement.

While I am not going to get into the details of the Casebolt assault here, I do hope to use it as a launch point to ask (and encourage you to ask) some very serious and important questions. Questions like:

These are questions that Christians had better start asking and answering (especially while they are still allowed to openly do so).

Of course, even asking these questions and considering them seriously requires us to do something that the American Corporate State and its most thoroughly programmed drones desperately do not want to see us do, that being: Think for ourselves. Or even worse: Think biblically.

The State and its systems are all purposefully designed to promote happy, thoughtless, uncritical compliance on the part of the masses…quite the opposite of “testing all things in light of Scripture”, wouldn’t you say?

While I’m not making any specific points regarding any specific instance of alleged Police lawlessness, I do hope to remind myself and encourage others to use this opportunity to test our concepts of Police; civil government; and the role, responsibilities and limitations of the State by light of the perfect, sufficient Word of God.

Something tells me that whatever we are getting wrong here in America (or anywhere else) is, in fact, lovingly and sufficiently addressed in Scripture.

So let’s get into the Word and trust that we really, truly have been perfectly and sufficiently equipped for “every good work” – including civil government and law enforcement – by the Nature of God as revealed in His Word. (See: 2 Timothy 3:17)

Seek Truth wherever He leads. (See: What does Jesus bring to politics, education, law, and economics?)

Then apply that truth in loving obedience to Christ the King, the personal embodiment of all true law that defines and binds all of His creation…including the land we now know as America.

Only through that loving obedience to Him can we ever hope to truly restore peace, justice and prosperity to our land…or any other.

I’d like to close by repeating the opening section and asking two simple questions:

In a Police State, when the Police speak (or beat or tackle or shoot), you don’t challenge them. You simply conform to their will and obey.

You don’t think for yourself in that moment. You don’t critically evaluate what one person is doing to another when the one doing it is wearing a badge. And you certainly don’t act out in resistance to or correction of the behavior perpetrated by the one wearing the badge.

You just listen for orders from the Police and you do as you’re told. You obey.

Whatever the Police deem must be done, you let them do.

So how close are we to living in a Police State?

And what, if anything, are we going to do about it?