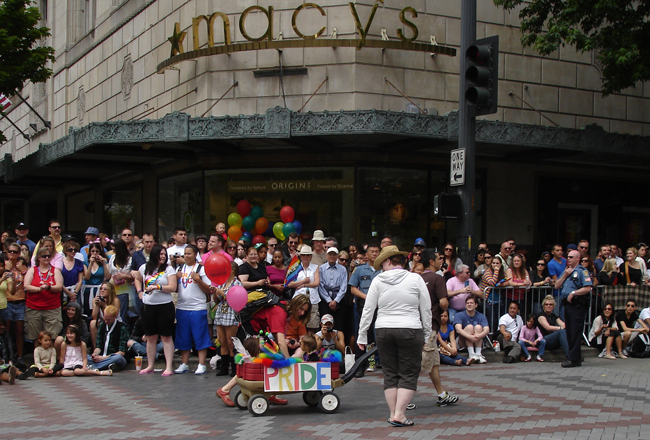 Remember the good ol’ days when something like a parade of naked men on bikes riding by a bunch of little girls downtown in broad daylight, waving and smiling as they went along, would have resulted in either an arrest, a lynching, or some similarly appropriate beatdown? Such approaches to things like naked men riding bikes past little girls were racing through my mind as, on a beautiful 2010 summer day in Seattle, I looked on in Twilight Zone-esque horror as…you guessed it…a parade of naked men rode their bikes past a handful of little girls who were looking on as the men waved, smiled, and went along their merry way to the cheers of the largely white bread, “middle class” crowd gathered ’round them.

The little girls were just a very small (and young) part of a very large crowd; a crowd composed mostly of very clean cut, suburban-ish middle income folks. Both sides of 4th Ave were lined with people, many rows deep, and almost all of ’em were cheering, clapping, and generally celebrating the parade of “progress” rolling along before them. It was a happy day…if you were a naked gay guy on a bike. Or a fan of naked gay guys on bikes.

Oh, and that was only the tiniest little taste of what was going on there in the middle of Seattle on 4th Ave on that particular sunny, celebratory summer day. Having recently been approached to contribute to the manuscript for a video production dealing with the subject of homosexuality from a biblical Christian perspective, and having my residence situated about four blocks from the Space Needle in downtown Seattle, it seemed like the right time to go ahead and attend my first Gay Pride Parade. Obviously, going into such an event I had, um, expectations. Expectations of depravity, perversion and all sorts of horrors to be on full, loud, and proud display. And as a guy who had already seen a lot of the world and a lot of bad things and a lot of Super Bowl halftime shows, I had built up what I thought was a pretty good tolerance to such displays.

So the big gay day came and I was off to the intersection of 4th and Pike, where the parade route was set to begin. It was time to face the progress…

And while I thought I was prepped for battle and ready for combat, all I could think of as horror after horror rolled, walked and/or crawled past me was the three little girls who had sat down across from me on 4th Ave right before the festivities began.

The Land of False Liberty, Less Freedom, and No Shame

For this reason God gave them up to dishonorable passions. For their women exchanged natural relations for those that are contrary to nature; and the men likewise gave up natural relations with women and were consumed with passion for one another, men committing shameless acts with men and receiving in themselves the due penalty for their error. ~ Romans 1:26-27

“Whoever causes one of these little ones who believe in me to sin, it would be better for him if a great millstone were hung around his neck and he were thrown into the sea.” ~ Jesus (The Real One) in Mark 9:42

As I settled into a primo spot at the intersection of 4th and Pike for the pending caravan of depravity, I couldn’t help but notice the three little girls across the street. They were sitting in the front, right along the street. One of them had a huge Coke-looking drink and another had some candy. They were all dressed nicely; very well taken care of materially, from all that I could tell at first glance. They each looked to be somewhere in the 5-9 age range. (Two of them are pictured below.) 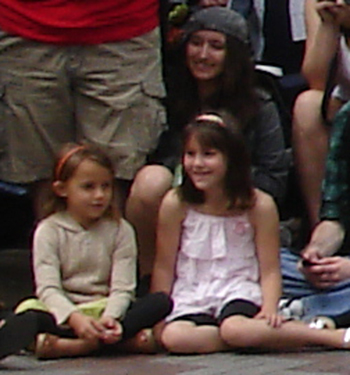 And as the carnage unfolded that afternoon, even after I had wandered down 4th Avenue to take in the grand event from different vantage points, I couldn’t get those girls out of my mind. Every float that passed, every condom-handing-out-advocate that walked by, and every leather bondage “couple” that crawled past made me think of the little girls who were there – the little girls who were watching all of this happen. The little girls who had been brought here by someone and told that this was all very good and very much worthy of celebration.

Lest you get the wrong idea, the little girls didn’t really stand out all that much in this particular crowd on this particular day. Not that this was a crowd of 5-9 year old girls, of course, but it was a crowd that was overwhelmingly composed of “normal” looking, “normal” seeming middle class folks. They were mostly dressed conservatively. They were mostly well groomed. They were the higher end of average, as the world measures (and crafts) such things. They were, and are, the face of America.

With every gaudy, perverted display that wandered past them they cheered. They applauded. They encouraged. The assembled mass of American suburbanites couldn’t have been happier…three little girls included…

Progress…Toward the Wrath of God

And since they did not see fit to acknowledge God, God gave them up to a debased mind to do what ought not to be done. They were filled with all manner of unrighteousness, evil, covetousness, malice. They are full of envy, murder, strife, deceit, maliciousness. They are gossips, slanderers, haters of God, insolent, haughty, boastful, inventors of evil, disobedient to parents, foolish, faithless, heartless, ruthless. Though they know God’s righteous decree that those who practice such things deserve to die, they not only do them but give approval to those who practice them. ~ Romans 1:28-32

A long time ago, in a galaxy far, far away – or at least it sure feels that way to those of us who were’t actually alive before the formal dawn of America’s Golden Age of Progressivism in the 1960s – you couldn’t usually comfortably parade about your homosexual inclinations if you had them. You sure couldn’t strip down and ride your bike down Main Street (or 4th Ave.) with a gang of your also-naked buddies and wave to little girls with impunity.

You also couldn’t openly operate a hard core pornography-related business. You couldn’t even murder an innocent child if it got in your way by threatening to be born.

And no naked bike riding down Main Street to the giddy smiles and applause of children?

C’mon now…what do you want? Leave it to Beaver? Andy Griffith?

Well, yeah, kind of. And what’s wrong with that, anyway?

Who did all of these idiotic, perverse, and utterly destructive things?

Who made all of these moronic moves?

Who freely chose to sit in the electric chair and flip the switch?

It was us…and it still is.

And by “us”, I mean the Christian Church in America.

When we came to believe that true freedom was not necessarily rooted in the nature of God as revealed in His Word, we doomed ourselves, our culture, and our children to this.

The liberals didn’t manipulate or trick us into doing this.

It isn’t even the fault of the gay activists on bikes and their many friends all across the collapsing culture.

At least not primarily, anyway.

We  – the most self-described “conservative Christian” folks in the country – are the first and the most to blame for the cultural rot that is killing us and dooming our children to things far, far worse than naked perverts freely and happily strolling (or riding) by to the cheers and applause of “middle class” America.

And we – the true Church within the professing church – are the only ones with the power, by the grace of God through the supernatural Gospel and Great Commission, to save this otherwise unsalvageable situation.

We must shine the light of Scripture on our cherished idols and repent of our great and terrible idolatry before we can do anything to remove the relative speck from the eyes of the lost and dying around us.

We have to be broken of the lie that people determine truth and are free to define for themselves what is right, good, and lawful, apart from the Word of God.

We have to stop fighting tragically comedic battles aimed at “getting prayer and bibles back into schools” when the very schools in question are themselves consecrated to precisely the opposite approach to children’s education as that which God has *ahem* clearly commanded in His life-giving Word. “Winning back public schools” for Christ is as ridiculous as “winning back strip clubs for Christ”, since both are institutions designed from the ground up to pervert the very subjects they claim to celebrate.

We have to stop clinging to and defending the notion of the “freedom to worship” any god one likes as a good thing, when the crystal clear Word of God tells us exactly the opposite. God could not be more clear as to what will promote true peace and lasting prosperity in the land, and yet we, in our idolatry of men, have become pridefully certain that the freedom to worship false gods is not only acceptable, but a defining virtue of our culture and civilization. That is how far we’ve fallen. That is how blind we’ve become.

Until and unless we start actually believing what’s written in the Bibles we carry and the Ten Commandments monuments we fight so hard to sprinkle around the landscape like so many lucky rabbits’ feet, we are, and should be, the most surely and dramatically doomed of all people.

Until we make our stand clearly and boldly on “thus saith the Lord”, and reject every man-made, man-centered competing standard that is raised up against His Word as the guiding rule and standard in every realm of life, we will secure for our children a future filled and defined by things much, much worse than naked men smiling as they ride by on their bikes.

Until we repent and truly believe, we have nobody to blame but ourselves.

Until Christians proclaim and apply the whole Gospel and Great Commission, people and cultures can only rot and die.

May we be graced by God to embrace the Great Commission command to make disciples of the nations, teaching them to “do all the things that He has commanded“…beginning with ourselves…while there is yet time.

Well color me satanic and call me America! (Or: How our cherished tolerance for false gods will ultimately kill us.)