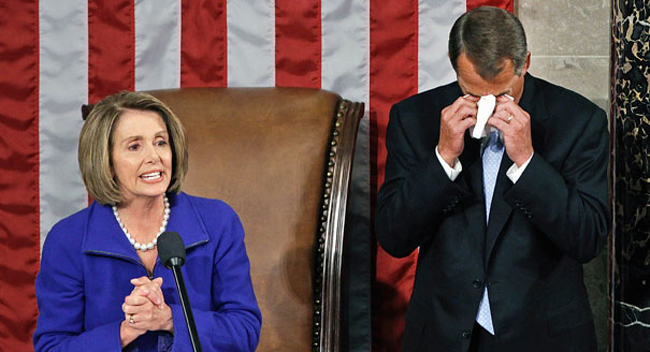 In The Crisis on the Border, published this week by The Wall Street Journal, Peggy Noonan dutifully resumes her well-worn role of conservative-ish Republican voice of reason/propaganda, showing us once again that at least some of the good folks in Republicanville are paying very close attention and are very, very, very concerned about our nation’s desperate and rapidly deteriorating condition.

Yessiree, they are very concerned.

They are downright aghast. Make that aghast!

In the piece, Noonan does what she’s been doing successfully since her days of wordcraft in writing speeches for party leaders like George H.W. Bush, for whom she spun such well known hits as, “kinder, gentler nation” and “thousand points of light”.

True to form, in her WSJ piece, we get oodles of color-by-number empathy, sympathy, concern, and (almost) outrage, along with a healthy(?) dose of Republican/Democrat paradigm reinforcement.

“What is happening at the southern border is a true and actual crisis. News accounts justly use words like chaos, collapse and breakdown. They feature images of children—toddlers, 4- and 5-year-olds—being shuffled to warehouse holding centers, sleeping crowded at night on what look like pallets, covered only in Mylar blankets. ‘I never thought we’d have refugee camps in America,’ said Texas Sen. John Cornyn, ‘but that’s what it’s appearing.'”

And she closes with,

Meanwhile some in the conservative press call the president incapable, unable to handle the situation. But he is not so stupid he doesn’t know this is a crisis. He knows his poll numbers are going to go even lower next month because of it. He scrambled Wednesday to hold a news conference to control a little of the damage, but said nothing new.

There is every sign he let the crisis on the border build to put heat on Republicans and make them pass his idea of good immigration reform. It would be “comprehensive,” meaning huge, impenetrable and probably full of mischief. His base wants it. It would no doubt benefit the Democratic Party in the long term.

The little children in great danger, holding hands, staring blankly ahead, are pawns in a larger game. That game is run by adults. How cold do you have to be to use children in this way?

With bucketloads of empathy, sympathy, and any number of additional pathologies deployed, we are meant to be left with hearts tugged, brows furrowed, and the hope that maybe, just maybe, the American people will inspire and/or shove the Republicans into once again manning up and finding a way to save us from the coldness and consequences of those diabolical Democrats.

Meanwhile, back at the ranch (and I mean that literally)…where is George Bush!?

Either one; I’m flexible.

As I recall, at least two of them have been Presidents and I’m pretty sure at least one of those two lives in Texas…where rumor has it that we now share an open border (and border crisis, according to Ms. Noonan) with Mexico.

See where this is going?

Oh, but wait…wait just a minute…

Also known as: The North American Free Trade Agreement…which was designed to implement early major steps toward bring all us North Americans together in a more formal way and was signed into effect by…*drumroll*…one President George H.W. Bush.

Sure seems to be…and unless we’re “special” too, we ought to be able to see the glaring, flagrant, practically-neon-lit-and-on-fire-waving-red-flag that is unfurled and flapping right in front of our eyes:

This border crisis is engineered, and it is engineered by the globalist forces that own and operate both wings of the American political puppet show.

Obviously, the Democrat party is largely built upon open contempt for God and therefore an actual (if at times unconscious) contempt for anything good. But not so obviously, the Republican Party is being led in the same direction by leaders with the same basic foundation of belief, that being: Man-centeredness.

In it’s rebellion against the authority of God’s Word, the Republican Party has long been charting a dark path for America…a path to the same destination charted by the man-centeredness of the Democrat Party, albeit with different views and stops along the way.

Both major political parties share a contempt in practice for children, liberty, freedom, kittens, and rainbows (unless they’re promoting homosexuality).

So what’s this about “coldness” then, Peggy? Can you actually be wondering what would make someone so “cold” as to “use children this way”?

I mean, what’s the big deal about children? We murder ’em by the tens of millions here in “land of the free and the home of the brave”. We do so mainly for convenience, and the wives of both President Bushes (including the one you wrote speeches for) are for maintaining that pro-infanticide aspect of contemporary Americana. So what exactly are you talking about?

The gig is up, Pegs.

We’re on to your game.

May we all repent of having ever bought into the game being played out on the border with those poor children – a game that has produced the graves of tens of millions of innocents murdered for profit and convenience, and a game that is even now about to doom American children of the present to a future of servitude to the emerging Corpo-Fascist State.

…if my people who are called by my name humble themselves, and pray and seek my face and turn from their wicked ways, then I will hear from heaven and will forgive their sin and heal their land.