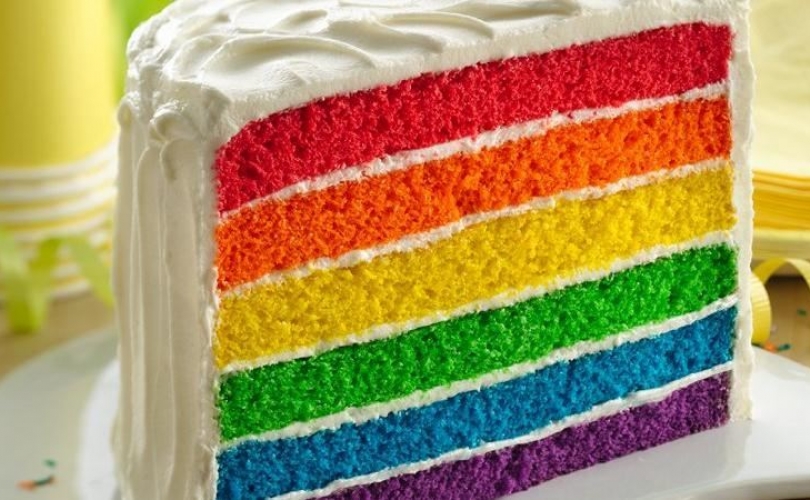 Who knew that giving God the finger could be so delicious?

There’s no doubt about it: Here in “god bless ‘merica”, where profit is god and God is bad for business, it’s become all the rage to openly mock biblical Christianity by any and all frosted, fruity and delicious means possible.

As for all of the “gosh golly gee, that’s terrible!” and “what has happened to America?!” squeals of “outrage” that something like a new gay cake promo tends to inspire from verbally indignant professing Christians, most of those same folks are as likely as ever to support and even personally profit from the very companies that are doing everything they can to corrupt and destroy the culture.

Betty Crocker joining in the all-American corporate push for the redefinition of family and the profanation of marriage is anything but a shocker. It’s just the latest example of the not-so-new normal in American business life and culture.

As reported Monday by Dustin Siggins, “Famed homemaking company Betty Crocker once promoted couples making up over a cake. Now, the 90-year old company says it is adjusting to the times by promoting all relationships — including homosexual couples and cohabitating couples — as equal to married couples with children.”

So last week it was gay Whoppers from Burger King, and this week it’s gay cake from Betty Crocker. The hits just keep a-comin’…

Thanks to corporate America, we should be just a few gay condiments away from the bliss of enjoying an entirely gay meal.

We’ve got gay Oreos from Nabisco.

We’ve got Pillsbury, Pepsi, Wheaties, Cheerios, Green Giant, Starbucks as just a sample of the all-American, culturally iconic, pro-homo/anti-Christian brands doing their dead on, delicious best to help fuel the Romans 1 trajectory of our culture.

With this trajectory comes the increasingly overt persecution of biblically obedient Christians.

Both the promotion of homosexuality and persecution of obedient Christians are purposefully intensifying, side by side, as two feet taking alternating steps down a path toward a desired destination.

Yet even while this transpires at length, year after year, in rather glaring (and well marketed) fashion before our “shocked” and “outraged” eyes, most professing Christians in America do far more to enable this march into darkness and persecution than they do to resist or oppose it.

Even worse, more often than not, many professing Christians personally profit from the very corporations that are now feeding the flames of persecution.

Who knew that the “mark of the beast” forming in America as a tool for the economic persecution of obedient believers would be largely financed, enabled, and profited from by professing Christians? (I’ve covered aspects of this sad reality in several earlier posts, including A Mark of the Beast and Corporate “Mark of the Beast” Rollout Continues.)

As more and more obedient believers encounter the practical, real-world consequences of the broad push by corporate America to openly advance anti-Christian causes and persecute obedient believers, they are waking up to “the blessing of persecution” (Matthew 5:10) as a building reality right here and now.

This persecution is a precious and treasured blessing in that in allows true, obedient Christians to stand firm by the grace of God as an example and light.

With that truth understood and held close as the beautiful thing that it is, it seems as though many professing believers use even this biblical concept of the “blessing of persecution” as an excuse or rationalization for them enabling the persecution in question.

Bizarre as that may sound, it is true and in complete harmony with a variety of other biblical truths that are warped and abused by professing Christians in America in order to justify their inaction, apathy, or at times even their active participation in (or profit from) the persecution of obedient believers. Here are a couple of examples:

We all must guard against these abuses of the beautiful truths and life-giving tools given us by Christ. It is our nature to be selfish, and that nature has been well exploited by the enemy that now openly ravages the culture in which we have been placed.

May God grace His people with obedient repentance so that, one supernatural salvation at a time, we might restore this culture, one obedient disciple, family, community, and town at a time. That is our great mission as given us by the Lord of creation.

No matter what this world and our enemies may say and have you believe, these things are possible right here and right now…if, and only if, we will repent and actively believe.

His obedient people will prevail.

Stuff that in your Oreo, Nabisco.