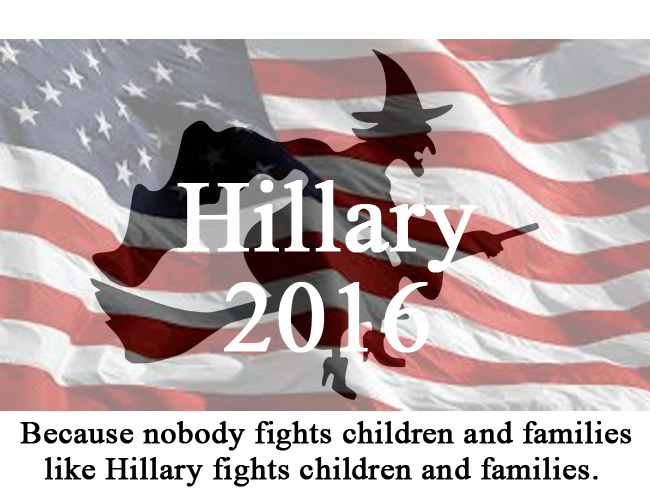 As if a witch leading Iowa legislators in prayer last week wasn’t comically tragic enough, the weekend followed up by treating us to the official launch of Hillary 2016. Adding some interesting zing to the Hillary launch was what some have called an “astounding typo”. Apparently, in promotion of her Big Day, the official Hillaryland press release phrase that included the line: “fought children and families her whole career” was …*ahem*…supposed to read “fought for children and families her whole career”. I’m not so sure, but, either way, it’s fun to watch Hillary stumble and fumble out of the gate, whether it comes in the form of an “astounding typo” or a Freudian slip.

While it sure can be a whole lotta fun to marvel, wonder, and laugh at the likes of Hillary, and it can be very tempting to get totally into the Secular Right’s purported “opposition” to the secular Left, as Hillary 2016 rolls (and tumbles) out of the gate, it’s very important to remember one thing: The Secular Right and Secular Left are two wings of the same Progressive Dragon. (See: How to Kill the Two-Headed Dragon (Before it Finishes Killing Us)

Both the Secular Right and Secular Left are purposefully leading us into the God-denying hell of Statism, one faux-“choice” and sham “election” at a time.

This is why the Secular Right and Secular Left seem to agree on so many fundamental things in practice even while they pretend to disagree with their rhetoric.

This is why “leaders” and Presidents brought to us by both the Secular Right and Secular Left have managed to consisdtently grow the power of government, shrink the liberty of citizens, grow the wealth of the Corporate Elite, and increase the financial dependency of the masses on the government that they grow and grow and grow in what you can see is kind of a circular deal here. As millions of professing conservative Christians routinely (and unwittingly) prove right alongside their secular leftist allies year after year and election after election, Statism is the natural default worldview of all who deny Christ as King in practice. (See: What do Barack Obama and Joel Osteen have in common…with George W. Bush?)

The growth of the State in place of obedience to Christ as King is the default political approach of those supporting either the (R) and (D) side of the Dragon. This is why we have come to a place in America when not one single top tier “conservative” Republican candidate for the presidency is actively campaigning on the elimination of flagrantly socialist/Marxist programs like Social Security, Medicare, and State-controlled “schools”.

And why is this?

Well, there are many reasons, but one of the biggest and ugliest is this: The vast majority of professing conservative Christians actively support continuing (and often expanding) each and every one of those Marxist, culture-warping programs.

And why to these “conservative Christians” do this?

Because they are neither conservative nor Christian in practice when we dare to define things like “Christian” in light of Scripture.

It’s as simple and pathetic as that.

“Conservative Christians” are much more up for another Reagan to lead them than they are interested in subjecting their politics, law, and economics to Christ as King.

Once “conservatism” was severed from explicit connection and active submission to the Nature of God as revealed in His Word as its binding authority, it became just as doomed and destined to lead us to the hell of Statism as anything the Left half of the Dragon can cook up.

You see, my fellow true conservatives, we are no less obligated to submit to Christ in our politics than those on the Left. We are much more obligated, actually, since we are supposed to love the one who saved us and, as evidence of that love, actively strive to obey Him in all that He has commanded (see: Matthew 28:18-20).

The sooner we accept, embrace, and repent of the fact that professing Christians in America are most responsible for the Progressive Dragon’s Left-Right march of our culture into Statism, the sooner we will, by God’s grace, finally be able to combat and kill that Dragon with the only weapon that will ever be able to take him down: The Gospel-fueled Great Commission of Jesus Christ.

How America Idolatry Got Us Here

We currently (and temporarily) live in system of purposefully intertwined, sometimes paradoxically complimentary mechanisms by which the State grows and freedom dies consistently under the watch of Republican and Democrat Presidents and Congresses alike. So long as they can keep their program drenched in patriotic rhetoric, doused in patriotic colors, and immersed in emotional, man- (or, better yet, child-) centered propaganda, we will go along with the perpetual growth of the Welfare/Warfare Corporate State. (See: Are we all Socialists now?)

Because we idolize America. We have been pitched and sold a brand so successfully that it – the America brand – now trumps all else and is the defining lens through which we see and understand all things.

It is all quite purposeful.

And the only answer – which just happens to be the answer that you will never hear or see featured by advocates of either the Right or Left wing of the Secular Progressive Dragon – is the Gospel-fueled Great Commission of Jesus Christ the King of Creation. (See: How to truly love (and really save) America.)

So long as we follow the Progressive Dragon’s lead and look to man as our guiding standard in law, government, and economics, we will continue to march down the darkening path that has already taken us so low and so deep into dysfunction and despair.

The primary means by which the Dragon compels us to stay in the man-centered camp is by way of fear: Fear of things like Hillary 2016.

By putting up one puppet that is horrifying to those on the Secular Right alongside another puppet who is roughly as terrifying to those on the Secular Left, the Dragon has effectively chosen our “leaders” for many generations now…all because we are afraid and do not have the faith to obey and stand upon the Word of God when it comes to law, politics, economics, and pretty much anything else. (See: What does Jesus bring to politics, education, law, and economics?)

So when Hillary fumbles her way out of the gate in her latest quest for power, and the Secular Right (by way of talk radio, FOX News, and the like) strives mightily to get us zoned in and focused on this installment of The Road to Statism, just say no.

Feel free to laugh at Hillary, but don’t let her be used to lure you into the Dragon’s game – a game in which he controls all of the pieces.

Feel free to laugh at and oppose both the Secular Left and the Secular Right vwings of the Progressive Dragon.

Feel free to dismiss the satanic lie that “you have to choose the lesser evil to lead” you down the path to hell that Republicans, Democrats, and their Corporate masters have been charting for generations now.

Feel free to acknowledge the danger, idiocy and even the humor of something like Hillary 2016.

But don’t be fooled.