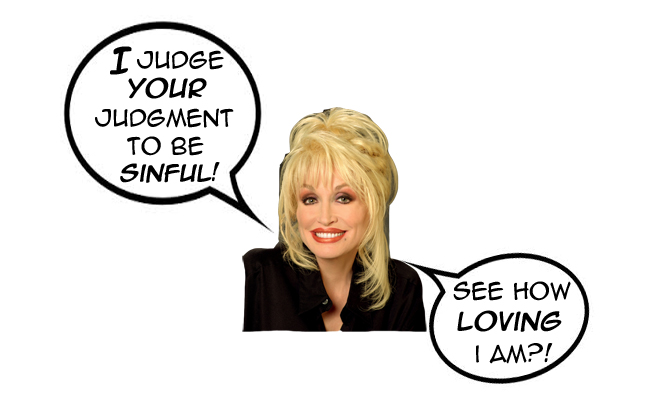 Don’t blame Dolly for promoting emotion over Truth when it comes to touchy, hot-button issues like the embrace and promotion of homosexuality as a perfectly good and legitimate lifestyle.

She’s just following the lead of the professing church in America.

Before we get into the church-fueled movement away from Scripture and towards emotion as the primary means by which terms like love are to be understood and applied, let’s check out the latest version of the inherently hypocritical and intellectually vapid “Judge not! (unless you agree with me)” line that has come to permeate and define our clueless, crumbling culture.

In a Q&A article published by Billboard yesterday, Dolly Parton had the following words of secular wisdom to share on the subject of making judgments:

Dollywood attracts lots of church groups, but it has also become a draw for the LGBT community. What does that say about you?

It’s a place for entertainment, a place for all families, period. It’s for all that. But as far as the Christians, if people want to pass judgment, they’re already sinning. The sin of judging is just as bad as any other sin they might say somebody else is committing. I try to love everybody.

You have a large gay following. To what do you attribute that?

They know that I completely love and accept them, as I do all people. I’ve struggled enough in my life to be appreciated and understood. I’ve had to go against all kinds of people through the years just to be myself. I think everybody should be allowed to be who they are, and to love who they love. I don’t think we should be judgmental. Lord, I’ve got enough problems of my own to pass judgment on somebody else.

So “passing judgment” is inherently sinful, and “the sin of judging is as bad as any other sin”.

But what other sin could Dolly possibly be talking about?

Can there even be any other sin in Dolly’s imagined bubbleworld reality?

How can we even know if anything else is sinful and how can she even begin to confirm that it is (or even that it is not) without violating her own ultimate standard of…um…judgment?

Apparently the only sin that can be named as sin is the sin of making a judgment.

But isn’t calling that a sin while saying that judging is inherently sinful an obviously terminal self-contradiction?

Isn’t the credibility of that statement killed by its own shaky, plastic sword by the time the whole sentence finishes rolling off the tongue of its emotion-driven, self-serving, self-righteously hypocritical advocate?

Telling someone that “making a judgment is wrong” (or sinful) is inherently…*drumroll*…judgmental. It is proud, flagrant, idiotic judgment on full, open display. Moreover, it is exactly the hypocritical, self-righteous judgment that Matthew 7 warns about…before going on to demonstrate and encourage the necessary pursuit and application of good and proper judgment.

So why does Dolly say such silly, self-contradictory things?

Why does she do this without even the slightest clue or sense of embarrassment as to the stark-raving hypocrisy made plain through her amazingly dumb words? Why does she even seem to be proud of her foolishness?

Well, there are many contributing causes to this sad situation, but the main reason is that the professing church in America taught her to think and act this way.

Again and again, and yes, even in “good, conservative, Bible-believing” churches.

Even in self-described “Reformed” congregations and fellowships, the pursuit of man-centered perspectives, traditions, and (especially) emotions have become, in practice, the standards by which “hot button” issues are to be tested and treated.

How many churches simply will not hear or stand for Scriptural light to be seriously brought to the subject of children’s education? How many of those churches brand biblical critiques of man’s approach to that subject as inherently “unloving” to the point of requiring silence on the subject (all in the name of love, of course)?

The children’s education subject is but one of many examples of the same sort of “emotion over Scripture” lesson that the church has been teaching a watching world…including Dolly Parton.

If the church will not model the pursuit and application of ongoing biblical reform in every area of life in the perfect light of Scripture, how can we have any expectation that Dolly Parton will seek and submit to the Word of God on the subject of homosexuality?

If the church will purposefully avoid dealing with certain issues that are clearly addressed in Scripture because those issues are controversial or are “criminally offensive” to those whose emotions trump Truth, then how can we expect Dolly Parton to seek and submit to the Word of God when it comes to hot-button, emotion-saturated issues that are “near and dear to her heart”?

If the professing church will move to dismiss, sequester, and even openly persecute those who do stand for taking even hot-button, “controversial” issues to the Lord, then how can we be surprised when the world persecutes the same obedient Christians more and more vigorously and aggressively?

Everything here begins and ends at the professing church’s doorstep. Not Dolly Parton’s.

It all comes down to the Great Commission.

More specifically, the professing church’s abandonment of the Great Commission. The true Church has been called and equipped to “make disciples” who will really, truly, and actually strive to “do all that” Christ the King has commanded…right here and now (see: Matthew 28)

But most churches – including most of the “good, conservative, Bible-believing” ones – simply do not believe this. In practice, they actively oppose it.

They want to do what they’re comfortable doing. They want to pretend that Scripture hasn’t spoken on the things that they’d rather not deal with. They just want to have their Sunday service, sing their hymns, have their Bible studies, and go about their business as they always have.

In this, they demonstrate their lack of desire for Christ the King to be King in practice.

In this state, they have no appetite for the Great Commission.

So they have given us Dolly Parton in its place.

Publicly proclaiming this truth will get you run out of many churches in America…all in the name of love, unity, and Jesus.