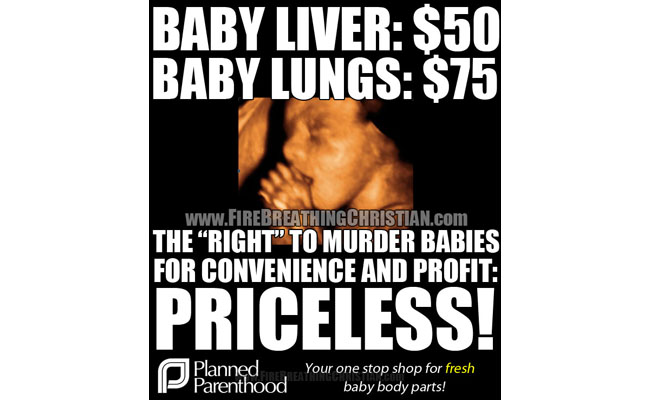 Lemme get this straight: Walter Palmer’s killing and subsequent decapitation of Cecil the Lion so that he might have a trophy to commemorate the kill is evil. (A position with which I would agree.)

Planned Parenthood’s ongoing, systematic mass slaughter of baby boys and girls, from whose still twitching bodies little lung and liver trophies are carefully preserved so that they might be sold to others, is “legal” and perfectly normal activity here in “the land of the free” and the home of the NSA. (A position that strikes me as ridiculously satanic.)

This is what hell looks like, my fellow Americans. (See: 51,000,003 reasons why America owes Nazi Germany an apology.)

This is where freedom, liberty, and law invariably lead when severed from explicit subjugation to Christ the King. (See: Presuppositional Law: Where we begin with law determines where we end.)

Yesterday in If only Walter Palmer had killed baby humans instead of Cecil the Lion… we covered some of the sickening yet very important-to-notice contrasts and inconsistencies between the way our All-American Pagan run system of systems encourages us to view the death of Cecil the Lion and the ongoing mass sacrifice of tens of millions of our own baby boys and girls on the altars of convenience and profit. (See: Selling murdered baby parts in America? Sure. Why not?)

One of the more pungent displays of mass insanity hitting the scene in this Cecil/Planned Parenthood comparative context is the manner in which many of those who are most “outraged” over Cecil’s head being removed as a trophy by a hunter seem to have little trouble at all with the fact of Planned Parenthood’s ongoing collection of trophy baby body parts to take to market.

Little trophy baby body parts everywhere just waiting to be turned into big bucks by those “legally” protected defenders of a woman’s All-American “right” to murder her child.

When Cecil’s decapitation is described by most mass media tools, it’s often conveyed in brutal terms. I’ve read of Cecil’s head being “hacked” off, for example.

Yet when the heads and parts of babies being murdered routinely all across the fruited plane are addressed by these same folks, the parts in question tend to be described using words like “tissue” or some similarly sterilized terminology.

So Cecil’s head was “hacked off” by a hunter and taken as a trophy, and that is obviously evil.

Little baby boys and girls who have their heads carefully crushed so that their chest-centered organs might be more effectively preserved and harvested for sale…well…that’s just “tissue”. They’re just “fetuses”. They’re not people at all…though they do conveniently seem to have marketable human organs that we need to be careful to preserve and extract.

Built on our pride. (See: The (All-American) Demonic Defenses of Planned Parenthood.)

We are here now (and will soon be going to even worse places) precisely because “We the People” will not have Christ the King to rule over us. That’s the inescapable and undeniable reality of our situation.

We will not submit.

We will not obey.

And until that changes by His grace, it only gets worse from here.