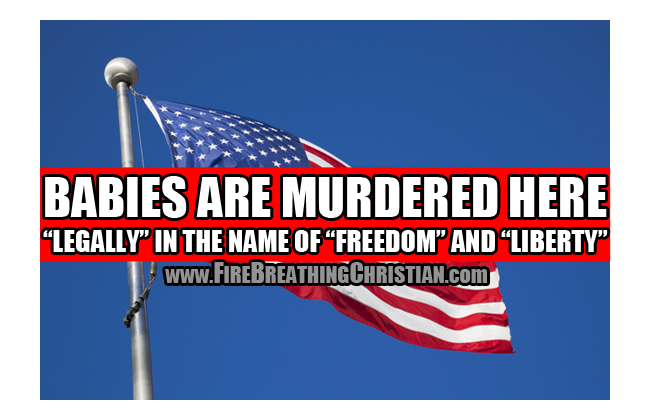 So let me see if I get this straight: We can openly murder tens of millions of our own little babies in a cold, clinical, systematic manner for the sake of convenience and profit in the name of “freedom”, “liberty” and our “God-given right” to do that sort of thing day after day, year after year, decade after decade, and now generation after generation, but if and when we ever find out that any of those mass murdered little boys’ and girls’ parts are – *gasp!* – sold to someone for whatever reason, then we are outraged! We’re horrified! We’re indignant!

Don’t get me wrong, there’s something supremely creepy, disgusting, and vile about carefully preserving the living human body parts of a lovely little healthy human baby boy or girl during the process of purposefully murdering and dismembering him or her. But is the killing of the baby itself any less supremely creepy than selling her parts for profit? Is the intentional murder of an innocent child for convenience any less disturbing than selling the little one’s lungs or liver?

Apparently in America – the land of “the free” and the home of “the brave” – the answer is: Yes!

Jeannie DeAngelis pretty much nails the hyper-insanity our profoundly corrupt American way on this most telling of subjects in Cash-4-Cadavers: What’s So Shocking about Selling Baby Parts?

“Quite frankly, while talk of forceps-positioning, ultrasound guidance, and preservation of pancreas tissue isn’t exactly appetizing and can be disturbing to mere laypersons, for those of us who expect nothing less from baby murderers, the most surprising thing about the whole Nucatola body-parts disclosure is the fact that some people seem shocked. In a secular society where right and wrong are based on personal beliefs, who’s to say that selling fetal tissue is wrong or immoral?

Therefore, all things considered — including moral relativism — the most surprising part of the Cash-4-Cadavers controversy is that ordinary people who are generally unfazed by 4,000 babies a day being brutally slaughtered are suddenly horrorstruck that babies, after being dismembered with America’s approval, have had their hearts and livers sold for a price.” (bold emphasis added – SAB)

Anyone still comfortable looking down on Nazi Germany from their proud American perch? (See: 51,000,003 reasons why America owes Nazi Germany an apology.)

Anyone still think there’s no fundamental problem with pretending that “We the People” have the power to define our own reality? (See: Note to ‘Merica: There is no “God-given right” to worship false gods. Repent accordingly.)

Anyone still under the impression that there is real hope for America apart from broken repentance and complete submission to Christ as King in practice? (See: Will America repent or will America be destroyed?)

Sadly, the answer to each of these questions still seems to be yes for most Americans…including most professing Christians in the land.

American pride dies hard…much harder than the tens of millions of babies it’s willing to routinely sacrifice on the altars of convenience and profit.

“. . . What exactly do most Americans think goes on in an abortion clinic when two living entities enter the facility and only one emerges? Do Americans view selling dismembered dead babies as worse than dissecting them while they’re still alive? And why, after abortion has been acceptable to America for 40+ years, are so many people disturbed by what happens to the legal victims of terminated pregnancies after they’re killed?

Meanwhile, as outraged as Americans are in reaction to the horror that’s been laid bare, the blood of 60 million baby lambs being silently slaughtered for convenience stains the hands of a nation whose sin is the same as those who watched the smoke rising from the chimneys at Auschwitz while professing not to know what was going on inside.“

Okay, Ms. DeAngelis has gone too far with that last claim.

On this point, Nazi Germany really warrants a defense. After all, the comparative sin of America is on a far greater scale (many times over) than that which was perpetrated by the Nazis. Let us also not forget that the target of America’s murderous narcissism was (and still is!) its own innocent children. And while some (perhaps many) Germans from the Hitler era may be able to credibly claim at least some level of ignorance or “plausible deniability” regarding exactly what was going on in those camps, modern Americans have no such cover. Nearly every adult in America knows full well what’s going on. We are far more “without excuse” than “those evil Germans” back in the Nazi days.

Even Hitler would find it hard to miss the uber-evil in what we do…though most Americans don’t seem to notice it much at all anymore, at least not enough to do anything about it.

This is what “freedom” looks like apart from submission to Christ as King.

This is what “liberty” smells like when “We the People” deem ourselves worthy of setting His unbreakable Word aside.

This is the Christ-less “law” and “justice” that inevitably awaits any person or culture that will not have Christ to rule over them.

And it only gets worse from here, until and unless by the grace of God we repent and submit to Christ as King in practice. (See: How to truly love (and really save) America.)

Clearly, we have a lot of work to do…and that’s exactly why we’re here.

The supernaturally supercool news is that God has us exactly when and where He wants us. We’ve been honored with the task of proclaiming and applying His Gospel-fueled Great Commission right here and now in this present (but soon-to-be-conquered) darkness. (See: Man up, buttercup. Rome wasn’t conquered in a day.)

Let’s take up that Gospel-fueled Great Commission mandate and advance the Kingdom of God.

Let’s do it “for the children”, but let’s first do it out of love for the King of kings who saved us when we were no better than the worst of Nazis or Planned Parenthood baby butchers.

Let’s do it for our own children’s and grandchildren’s futures, so that they might live in a culture of true freedom, liberty, and justice for all under the perfect, unbreakable Word of God, all by His grace, all for His glory, and all to our eternal benefit.

(On the subject of “Babies Are Murdered Here“, I highly recommend the video/cause of the same name. You can access the site and view the video for free by clicking here. It is very powerful and very well done. I hope and pray that it moves you to thought and action, all by God’s grace and for His glory.)