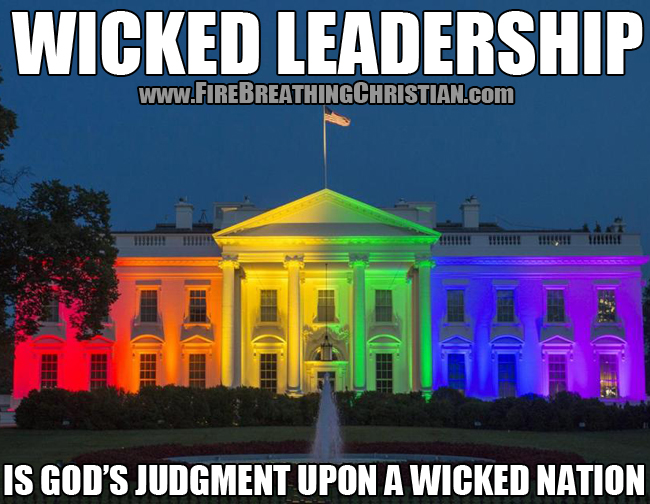 Can we stop with the “blame Obama” spiel, please?

Can we please stop blaming the Democrats, the Progressives and the homosexual activists for leading the culture to ruin when they’re just doing what we’ve taught ’em to do?

Let’s face it: Some version of “Can you believe how wicked and evil Obama is?!” has become an All-American “conservative” battle-cry pretty much since President Barack Obama took office back in ’09. And in the eight years prior, puppet show admirers on the Left had basically the same to say about President George W. Bush. So it’s not hard to see the All-American trend here.

We just love “being outraged”. We love Big Talk. We love noise. We love the controlled, contrived Political Puppet Show being put on by the Corporate overseers who own and operate the whole thing.

So much so that we can no longer distinguish it from reality…which is why it was made in the first place.

While all of the talk, noise and everything else that goes along with this nightmare politi-puppet production goes on and on year after year, our obsession with noise obscures our ability to focus upon the systematically evil things that just roll on and on unabated through Bush, Clinton, Bush and Obama presidencies. Things like…:

These ongoing systematic evils are all natural consequences of our having believed that “we the people” can be god in practice, capable of perpetually redefining concepts as we see fit including (but never limited to)  “liberty”, “freedom”, “marriage”, “family” and even “life” itself.

That’s just how we roll here in “the land of the free” and the home of the NSA.

Our arrogant, prideful, “life means what we want it to mean” approach to God’s Nature – which defines and constrains all true reality – is what brought us to yesterday’s surreal, bizarre, yet entirely predictable “Supreme Court” decision. (See: “Supreme Court” Votes for Wrath of God Upon America.)

In the wake of yesterday’s proud American declaration of war on the Nature of God, we have to face some ugly news…and some potentially awesome news.

First, the hard stuff: Let’s get this (*ahem*) straight – We totally deserve “gay marriage” in America.

We’ve fought for it.

Over generations of time, we’ve done everything necessary to bring it about.

And by “we”, I mean, first and foremost the professing Christian church in America. (See: Judgment begins with the Church…not the Democrats.)

Since biblically literate folks have the least excuse for disobeying what they’ve read and had preached to them, they are most to blame for disobedience and the consequences thereof. This isn’t rocket science or brain surgery. It’s simple, really.

So each and every one of us – myself included – need to be seeking out and repenting of the ways in which we have personally helped to bring about the culture in which we live. Before we can do that, we need to prayerfully beg God to show us the ugly realities for which we must repent.

This is not fun.

But it is necessary.

God is not shaken. He is not surprised. He is not wringing his hands and hoping things will work out.

He is in complete control and has assured that all of this – everything happening in America and everywhere else yesterday, today and tomorrow – will ultimately bring maximum glory to Him and maximum benefit to His people (see: Romans 8).

This is why while we certainly may love and mourn for America, we do not place our hope in her. Whether America fades quickly from the scene or lingers for a while longer should not be our main concern.

The Kingdom of God and its expansion here and now by God’s grace through His Gospel-fueled Great Commission should be what we a re about – even (and especially) now in this critical moment. If we truly love America and Americans, we will bring to them the one and only thing that can save them: The whole, undiluted supernatural Gospel of Jesus Christ. (See: Do we love America enough to call her to repentance? Or are we too proud for that?)

When we stop blaming Obama or Bush or Clinton for what we have done, we will have taken a first vital step towards coherently proclaiming that Gospel message by heeding its call to personal repentance ourselves.

When we finally set aside our “Gospel in a Bottle” approach to Magic Christianity and take up the Great Commission for which we were made, we will finally see victories on battlefields that have long been ceded uncontested to enemies of Christ by lazy, apathetic and culturally disengaged “Christians” who are more interested in their own comfort and “ticket to heaven” than they are in taking up their cross and giving everything that they have to the advance of His Kingdom now, as Christ has commanded.

So as the Pagan Right and Pagan Left Corporate media rolls on with tales of the “progressive victory” attained yesterday and the inevitable progressive victories to come, understand this: Their “victory” is fictional. It is fleeting. It is a farce.

That is the Truth that should move us to action right here and now as never before. (See: Roaring into Post-America Christianity.)