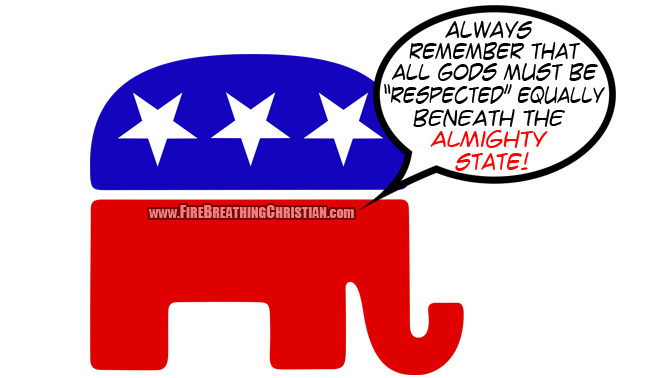 Ever notice how all the supposedly “conservative” leaders anointed and appointed by the national Republican Party seem to always end up leading us deeper and deeper into the Socialism and state-dependency that they claim to oppose? (See: How’s that Pagan “conservatism” workin’ out for ya, Christian?)

Ever notice that no matter how many Republican Representatives, Senators, and Presidents we elect, we just never seem to actually get around to halting the “legal” mass murder of American baby boys and girls? (See: Just in case you still think Republicans are ever going to actually stop abortion…)

The less good news is that most politically active professing Christians have not yet been awakened to that reality and are still being used as thoroughly programmed/duped pawns in a game that is purposefully designed to keep marching us all right on down the Pagan “progressive” path that we’re on now.

In this week’s installment of The Fire Breathing Christian Podcast, we try to help awaken some, encourage others, and remind all that “We the People” are being led by both the Pagan Right and the Pagan Left to the same Pagan destination. In this week’s podcast, we dive directly into the ideas advocated by Republican candidates for President as captured in last week’s CNN hosted “debate”.

We tackle Round 1 of the GOP “debate” here, featuring Louisiana Governor Bobby Jindal, (former New York) Governor George Pataki, South Carolina Senator Lindsey Graham, and (former Pennsylvania) Senator Rick Santorum. We go well beyond our normal target length of thirty minutes in order to capture and consider the brilliance of these would-be leaders of America and test what they have to say in light of Scripture and a biblical worldview.

We play through and examine several key statements from each of the candidates on a variety of issues and explore the manner in which each Republican candidate advances the religion and worldview of Statism through appeals to concepts that sound somehow vaguely Christian-ish or Christian-friendly when, in fact, they are actually diametrically opposed to core biblical truths and will inevitable lead to the persecution of true Christians aimed at the suppression of true Christianity.
.
Lord willing, next week we will tackle the Big Name Republicans who were featured in Round 2 of CNN’s GOP debate.

You can listen to the full FBC Episode 6 podcast on the below player or by visiting our Podbean.com page by clicking here.