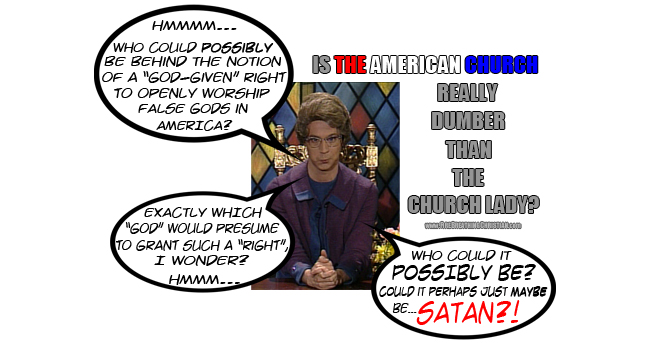 Even something like a foolish, mocking swipe at Christ and His Bride, the Church, when taken by the likes of SNL, is always ultimately going to be used perfectly by God for His glory to accomplish His purposes for the benefit of His people (see: Romans 8:28).

With that beautiful, unbreakable truth duly noted (and while also noting that this is in no way an endorsement of SNL on my part), let’s have a look at just one way in which one of this popular show’s anti-Christian presentations can now be seen and applied in a very helpful manner.

Back in the late ’80s, NBC’s Saturday Night Live featured a recurring segment called Church Chat starring Dana Carvey as The Church Lady, a tightly wound, condescending, hyper-puritanical granny-like critic who saw Satan behind every curtain, around every corner, and under every carpet. Episodes of Church Chat would culminate with The Church Lady rhetorically musing and building her case as to who was really behind whatever “terrible thing” she had in her sights on that particular weekend. She’d wonder and speculate as to “who, oh who(?!)” could possibly be the real power behind the evil of Halloween or Santa Claus or Hollywood or whatever.

“Who oh who could it possibly be?!

Hmmm…I just don’t know…who could possibly be behind such flagrant acts of darkness?

Could it just maybe possibly be…

That’s where The Church Lady would lead America on Saturday nights.

Church Chat would lead the culture laughingly down a Christianity-parodying, Christ-dismissing, Satan-minimalizing path – a path that, it should be noted – was originally cleared and has since been well maintained by professing Christians who’ve embraced practically every unbiblical stereotype of the Christian life and have lived down to every secular caricature imaginable.

Church Chat and The Church Lady are first and foremost byproducts of the actual Church’s surrender to Satan-empowering, Left Behind-style “end times” views and rejection of the Gospel-fueled Great Commission. Church Chat is what happens when the Church is known primarily as a bunch of disengaged, monochromatic dinosaurs who have little desire to take art, science, humor, technology, law and the like “captive to Christ” (2 Corinthians 10:5) and instead prefer to play the role of self-righteous sideline sniper while hunkering down and waiting for the rapture. (See also: Encouragement from Satan.)

While there’s a lot in there to think about and much that may be worth kicking around in future posts and podcasts, what we’re gonna focus on now is one area in which The Church Lady actually (and ironically and sadly) seems to have a leg up on the Church.

By “the Church” here I mean the professing Church in America.

Imagine, if you will, a new episode of Church Chat in which The Church Lady considers the notion of “religious liberty” as currently adored, defended, and aggressively promoted by pretty much every System-enabled American “leader” and “expert”, including every national level talking head from the Pagan Political Right, the Pagan Political Left, and all Pagan Political points in between. (See: Note to ‘Merica: There is no “God-given right” to worship false gods. Repent accordingly.)

Imagine The Church Lady concluding her presentation with…:

“Now who, oh who, I wonder, would ever be behind such a thing as the “right” to openly worship false gods? Hrmmm…I wonder who that would be…

Who could possibly be behind such an idea?

Who could possibly be behind the notion of a “god-given ‘right'” to openly worship false gods in America?

Exactly which “god” or wannabe god would propose such a thing, I wonder?

Who could it possibly be?

Could it perhaps just maybe be…

And there we have it: The most obvious answer to what has to qualify as some of the easiest to answer series of questions in all of recorded history.

The most obvious would-be “god” who would happily and purposefully champion the notion of a “God-given ‘right'” to openly worship false gods in America (or anywhere else) is Satan.

Who could have ever missed this, right?

I mean, what could be more obvious than the satanic foundation and inspiration of the “religious liberty” and “God-given ‘right'” to openly worship false gods (like Satan) in America? (See: Why do we allow the open practice of Islam, witchcraft, and Satanism in America?)

Moreover, if you’ve been as thoroughly programmed and conditioned by State and Corporate owned schools and pop culture as the typical professing Christian in America, you probably view what I’m doing in daring to criticize the All-American notion of “religious liberty” as the real blasphemy here. You may have even, at the behest of your favorite Pagan Political Right “leader” or “expert” recently joined in a rally defending the “religious liberty” and “rights” of Muslims and Satanists to openly worship Allah or Satan in America, having been led to believe that this is somehow “the good Christian thing to do”. (See: Christians rally for the “rights” of Satanists to worship Satan in America.)

And you’ve probably also been led down this path by your very own “conservative, Bible-believing” pastor or priest. (See: Why is the beast of Socialism eating our children? Ask your pastor.)

Do you now see how far we’ve fallen?

Do you see how desperate our condition really is?

But before that work can really, truly begin, we have a lot of repenting to do. (See: Dear America: Jesus isn’t running for King and His Law isn’t “up for a vote” either. Repent accordingly.)

We have a lot of Pagan/satanic thought to purge.

We have a lot of Pagan/satanic “leaders” and “experts” to reject and oppose. (See: How Islam and Satanism in America are fueled through satanic approaches to “religious liberty”.)

We have a lot of rebuilding and restoring to do by casting down our pride and taking up the long-rejected Gospel-fueled Great Commission, doing what our Lord has commanded and equipped us to do, all by His grace, all for His glory, and all to our eternal benefit (see: Matthew 28:18-20).

Only then will the professing Christian Church in America become less ridiculous and less destructive than Church Chat and The Church Lady.

Only then will we not only recognize but crush the wannabe god behind the supposed “freedom” to worship Allah or Satan anywhere in God’s creation.