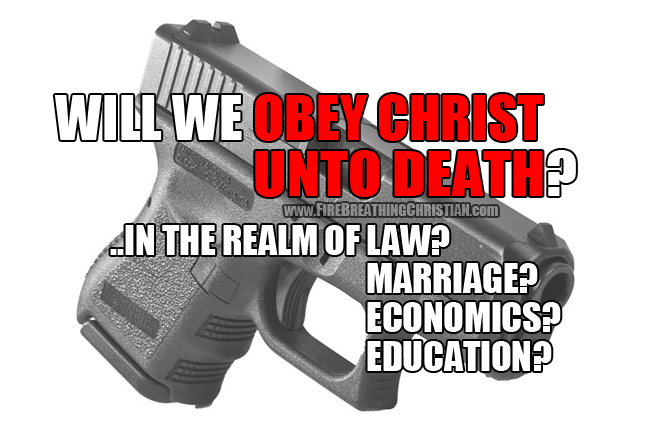 We’re all born this way, and until the God we hate supernaturally intervenes in our lives by raising our dead, selfish, sin-loving, holiness-hating selves into living, sin-resisting, holiness-pursuing New Creatures in Christ, we quite naturally do all that we can to mock and overturn the sovereignty of God above us. We will do anything in our vain, suicidal attempt to deny His rule over us, and I do mean anything – up to and including killing Him if we had the power and opportunity (see: the crucifixion of Christ).

In this context, it’s easy to understand unrepentant unbelievers’ attraction to the notion of killing Christians.

If one hates God, the Spirit of God is literally living within His people, and said people are a constant source of conviction through their grace-fueled life of increasing obedience to Him, including their faithful proclamation of the Gospel command to repent and submit to Christ as Lord, then they stand out as an obvious target of opportunity to the sin-loving, Truth-hating Pagan mind.

Chris Mercer’s recent murderous rampage in Oregon is a reminder of all of these things, and the broader (imploding) American cultural context in which his mass murder of professing Christians occurred gives us every indicator that more and more of the same sort of Christian hunting is likely to be a part of our near-term future. Ours is a culture proudly and openly at war with Christ and His people, and those people will be hated – murderously so, by a sin-loving world that simply cannot stand those who would dare proclaim with clarity the Gospel command to repent and submit to Christ as King.

“If the world hates you, know that it has hated me before it hated you. If you were of the world, the world would love you as its own; but because you are not of the world, but I chose you out of the world, therefore the world hates you. Remember the word that I said to you: ‘A servant is not greater than his master.’ If they persecuted me, they will also persecute you. If they kept my word, they will also keep yours. But all these things they will do to you on account of my name, because they do not know him who sent me. If I had not come and spoken to them, they would not have been guilty of sin, but now they have no excuse for their sin.“

There it is…that pesky “sin” word.

The identification of sin as evil and something that requires repentance – a turning away and repudiation en route to total subjugation to Christ as King  – is what this world cannot abide.

And most churches are happy to accommodate…even when they do use the word “sin”. They do this by sort of leaving it there in a vague, undefined sense, never bothering to address it as a concept in any sort of biblically informed detail; never desiring to flesh it out in a way that might aggravate or agitate a potential pew-filling, tithe-paying “convert”.

And then the Gospel is just: Repent and believe.

Repent of what, exactly?

Just don’t kill or rape anyone and it’s all good.

No need to ask, much less answer, questions as to what Christ has commanded in the areas of law, economics, family, marriage, and children’s education.

Nah, no worries there.

Just repent generically and it’s all covered. You’re good to go. Just accept Jesus as your Savior. There’s no need to actually submit to Him as Lord.

Whoever says “I know him” but does not keep his commandments is a liar, and the truth is not in him”

One of the commands that Christ has given in His Word is that we are not to deny Him before men. This command was honored by several in Oregon yesterday. CNN provided the following details regarding Mercer’s Christian-targeted murder spree:

The gunman who opened fire at Oregon’s Umpqua Community College singled out Christians, according to the father of a wounded student.

Before going into spinal surgery, Anastasia Boylan told her father the gunman entered her classroom firing.

“I’ve been waiting to do this for years,” the gunman told the professor teaching the class. He shot him point blank, Boylan recounted.

Others were hit too, she told her family.

Everyone in the classroom dropped to the ground.

The gunman, while reloading his handgun, ordered the students to stand up and asked if they were Christians, Boylan told her family.

“And they would stand up and he said, ‘Good, because you’re a Christian, you’re going to see God in just about one second,'” Boylan’s father, Stacy, told CNN, relaying her account.

“And then he shot and killed them.”

There is great power and testimony in the stand taken by the fallen men and women who stood to face near-certain death in order to proclaim their fidelity to Christ. Such a gesture is beautiful beyond description. Lord willing, the tragedy of yesterday will today inspire prayer, contemplation, repentance and renewed zeal for obedience to Christ in His people.

Along those lines, we must remember that the command not to forsake or deny Christ before men is but one of many crystal clear commands that He has lovingly provided us with through His perfect, sufficient Word.

He has spoken on law. (See: Presuppositional Law: Where we begin with law determines where we end.)

He has spoken on civil government.

He has spoken on marriage, gender, and family.

He has spoken on economics.

He has spoken on children’s education. (See: Redeeming Children’s Education: Confronting Our Satanic Approach to the Pursuit of Knowledge.)

He has spoken clearly on each and every one of these vital matters.

Will we deny Him in these things before men?

Will we shrink from obedience because we see the price we may have to pay as too high?

Would we rather lie face down and grovel for another day in cowardly submission to godless men?

Or will we stand and faithfully proclaim the lordship of Christ over all…trusting in Him to perfectly handle the consequences?