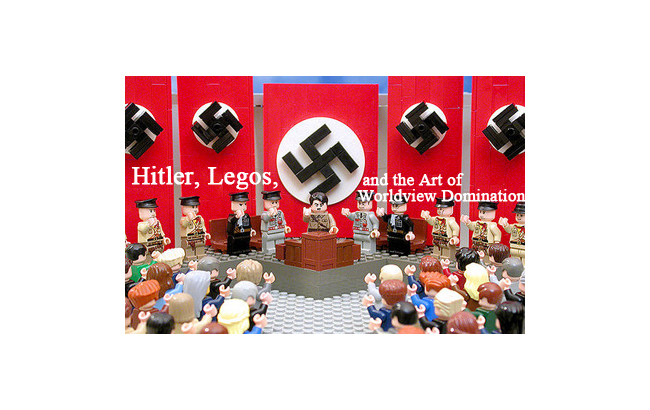 Dictators and other wannabe gods can be funny things.

Tragic too, but funny nonetheless, and I’m not talking about the little things like goofy little square mustaches or diva complexes. I’m talkin’ ’bout the Big Problem with these folks: They wanna be God.

This desire is in each of us from birth, and there it remains until and unless God graces us with regeneration, but we see it most spectacularly on display throughout human history in the antics of those whose dictatorial inclination is combined with the power and opportunity to practically act it all out on a grand, civilization-shaking scale.

These people see a world that they want to dominate and the means by which they imagine themselves able to do so coming together in a way that is irresistible. They want it all. Every last bit of it. They want total dominion and they will do whatever it takes to get there.

This is the nature of all rebellious men and women until they are supernaturally saved by the grace of God and transformed into New Creatures in Christ with new natures that love the holiness they once hated, struggle against the sin they once adored, and submit to Christ as King in practice where before they were all little dictator wannabes.

So for the Big Guys in the history of dictatorships and totalitarianism in human history, it’s really just a matter of scale and opportunity. They only end up doing what every other unsaved person would do if given the same power and opportunity, perhaps not in detail (as in precise application of tyrannical power), but most certainly in general (as in bending every aspect of life and creation to their personal will by whatever means seems best to them at any given moment).

Now, let’s look at one of those iconic Big Guys in the history of totalitarian Statists…and you pro’ly know who I mean already…

Shortly before the outbreak of World War II, Adolf Hitler read a letter that he’d received from President Roosevelt as a part of a speech that he gave to the Reichstag:

The manner in which Hitler reads this list of nations is interesting. (You can catch a video clip of this part of the speech by clicking here).

I’ve seen and read other clips of Hitler listing the names of nations, and each time I can almost feel the pride and power projecting from the little man toward my chest and heart. It’s as though he sees a world that he’s about to conquer and wants to call his shot before it happens, or recite a list of territories already taken as a way of prepping those watching for even more conquests – inevitable conquests – to come. He wants those watching to bask in the glow of his power and worship him.

One purpose of such boasting is to create an air of both invincibility and inevitability.

This is where both brilliance and vulnerability can be found and exploited in the rhetoric and propaganda of all would-be gods and Statists, including Satan himself.

The devil and his peeps just love to boast and imply and propagate the notion that this world and all that is in it is his.

He and they boast of his “conquered territory” all the time.

The realms of art, economics, technology, business and politics are assumed by many to be his as a result. Most professing Christians have bought into the satanic posing and propaganda so thoroughly that they are inclined to agree with every bit of it and, as a consequence, have left countless realms of God’s creation virtually uncontested in the hands of His enemies. (See: Encouragement from Satan.)

Where Hitler proudly recited lists of physical territories, the enemies of Christ boast of their rule over whole world-spanning, worldview-defining realms of creation.

Art, mathematics, philosophy, architecture, literature, economics, business, music…here on earth it all belongs to the devil, or so we are told by…the devil. (See again: Encouragement from Satan.)

The much greater problem is that the same line is being pitched by most professing Christians.

This is the great tragedy.

This is the great lie that we’ve been coopted to regurgitate and apply.

This is why we have led the way to the nightmare culture and emerging Statism that is unfolding all around us. (See: Judgment begins with the Church…not the Democrats.)

Where we have been perfectly called and sufficiently equipped by the Spirit of God, the Word of God, and the Gospel-fueled Great Commission of God to engage and defeat the enemies of Christ in every realm of His creation, we have bought the lies of satanic ownership, invincibility, and inevitability here on earth.

Yet even now, there is time and there is hope, and for the same reason mentioned earlier: God has placed His people here in this moment and in this culture with His Spirit, Word, and Gospel-fueled Great Commission as the means by which they really, actually can and will take everything from His enemies, all by His grace and for His glory. (See: The devil only holds what we leave in his hands.)

Adventure, exploration, music…His, His, His.

Play, exploration and fantasy are His. Lincoln logs, Tinker Toys and Legos are beautiful things.

Technology and our God-given impulse to pursue and apply technology are His gifts. They are His property. They do not belong to the enemy.

It is only our corruption of these things through sin that is evil. Sin is the problem. The created things themselves as reflections of God’s perfectly good Nature are to be redeemed and restored to God-glorifying use by His people, rather than pre-emptively surrendered to His enemies.

The present, all-encompassing rule of Christ as King over every realm of His creation is the most invigorating, inspiring, optimism-igniting truth that can wash over the mind, spirit, and soul of man. This is why everything that the enemy does and hopes for centers on replacing the reality of Christ as King with doubt in Christ as that King. (See: Roaring into Post-America Christianity.)

Every land, light and Lego in all of creation belongs to Him. He has called and equipped us to make that plain:

Now let’s get to it!