Well color me satanic and call me America! (Or: How our cherished religious tolerance for false gods will ultimately kill us.) 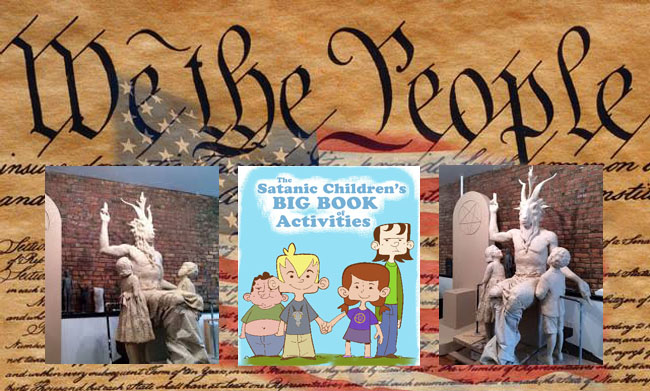 While there are many profound problems with the notion of religious pluralism as enshrined in American culture, the biggest bad thing about our wildly unbiblical permissive approach to life and worship is that God despises it (see: Exodus 20:3, or check out Openly Reject God;s First Commandment? YES! WE! CAN!)

In a tragic yet anything-but-surprising alert posted by the good folks at Stand Up for the Truth this morning, we learn of the latest in a looooong line of explicitly satanic advances planned and soon-to-be accomplished through the coherent, legitimate use of the American idol of religious pluralism as captured and celebrated in the First Amendment to the United States Constitution:

While both the Freedom From Religion Foundation, a secular activist group, and The Satanic Temple, a New York City-based organization that “facilitates the communication and mobilization of politically aware Satanists,” disagree with the decision to allow religious materials, both plan to combat Bible dissemination by giving out their own ideological literature at public schools in Orange County.

Just what sort of literature are the good (or is that evil?) folks at The Satanic Temple planning on distributing to children in State-controlled “schools”?

America’s Proud Commitment to the Worship of False Gods

Yes, my fellow Americans, this is where tossing the Nature of God as revealed in His Word as our standard has gotten us. This is how far we’ve fallen…for now (it’ll soon get much, much worse)…

“If a public school board is going to allow religious pamphlets and full Bibles to be distributed to students … we think the responsible thing to do is to ensure that these students are given access to a variety of differing religious opinions,” Satanic Temple spokesman Lucien Greaves said in a statement. “As opposed to standing idly by while one religious voice dominates the discourse and delivers propaganda to youth.” Among the literature that the Satanist organization reportedly plans to deliver to kids is “The Satanic Children’s Big Book of Activities,” a coloring book that focuses on Satanic themes and human tolerance.

And why not? If America is all about the freedom to worship any god, then what is there to stop these things from continuing, growing, and metastasizing?
Come to think of it, what has there ever been to pevent such openly satanic proliferation?
Our First Amendment is openly at war with the Commandments of God to man. His Law cannot be broken. But we can.

When “We the people” so long ago traded in God for the Founding Fathers as the gold standard in Law Giver and the Bible for the Constitution as the gold standard in law, were we not at that moment doomed to reach this point…and worse?
Has God not spoken with sufficient clarity as to His detestation of allowing false gods to be worshipped in the land?
How surprised can we truly be at what is now happening in this land as a result of our open, willful, and oh-so-proud rebellion against the clarity of His Word?
Just some food for thought there, Christian…
Lord willing, He will inspire true conviction, repentance, and restoration in His people…while there is yet time…and ideally before we get to see what comes after satanic coloring books…

Enemy of the Statist: Christ-centered Liberty vs. Man-centered Tyranny