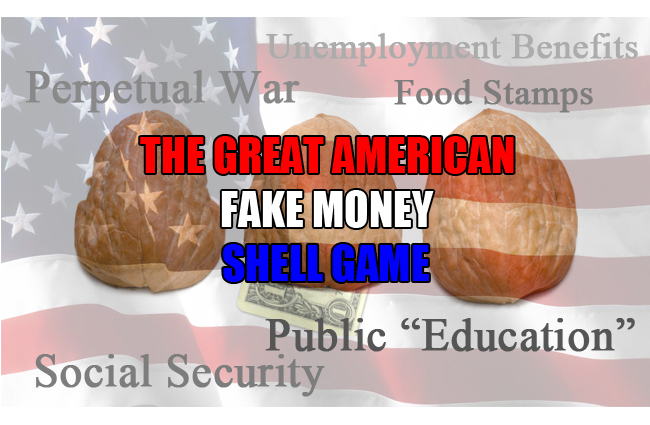 When it comes to State dependency, professing Christian “conservatives” are just as keen on the concept as “those crazy/stupid liberals” that they love to whine about and blame for pretty much everything.

They’re just too immersed in American State propaganda and “education” to notice.

Pagan “Christian” conservatives are all about propping up and “fixing” explicitly Marxist concepts and programs like Social Security and the State-run public “education” system. They also tend to be in favor of a ginormous military waging perpetual war overseas (in the name of peace, of course) and an Orwellian “security” State at home equipped with all of the latest cutting edge technology that fake money can buy…all while relentlessly criticizing the “wasteful” and “inappropriate” nature of other big government Statist programs now enshrined here in “the land of the free” and the home of the NSA. (See: How’s that Pagan “conservatism” workin’ out for ya, Christian?)

This is what a worldview at war with God looks, smells, and spends like.

The answer to the first question is that modern American “conservative” types have become every bit as Statist as their Leftist counterparts. Through generations of Corporate-owned, State-run “education”, the vast majority of professing Christians in America have become loud and proud worshippers and defenders of the American State. (See: Confronting Americult.)

Why would any professing Christian possibly believe (much less proudly defend) such a ludicrously and flagrantly blasphemous thing?

Well, because their idol has told them to, that’s why. (See: The America Idol: How “Christians” Worship and Enable the Anti-Christ State.)

Their true god in practice has spoken.

The America Idol has told them that Jesus is Lord “in Heaven” or “in the future” or “at church” or “in their hearts”, but He is most definitely not Lord here and now.

Since He’s not Lord here and now, we need to look to and rely upon our good Pagan “leaders” and “experts” here and now for guidance as to how to best manage our lives, culture and civilization in what they tell us is “the real world”. (See: Encouragement from Satan.)

So how does the America Idol fuel this endless expansion of American State power? How do those atop this beast keep the whole thing going and going and going despite the open and seemingly unending violation of every sound economic principle of sustainability known to man?

The Idol of State keeps doing what it does by simply printing (or typing or speaking) more and more “money” into existence.

This is how the anti-Christian System of systems keeps going and going…and going…and…you get the picture.

It keeps going because it keeps lying. The whole shell game of magic money out of thin air was a lie from the start, but it is a lie that has been used to secure incredible dependence and submission from the masses, including many who claim the lordship of Christ with their lips.

Dependence has been long established in America for most “conservatives” through the fundamental lie of fiat currency.

This is why the typical Pagan Right “conservative” type has no interest in removing Socialism, but is far more interested in securing it or “fixing it” by applying fundamentally corrupted “conservative values” to the maintenance and reorganization of these flagrantly anti-Christian, Socialist and Marxists systems.

This is why most grassroots “conservatives” in America are all about preserving Social Security and State-run mind-sculpting (children’s “education”).

In a most flagrant attempt at violating God’s unbreakable Word on economics, we have been sold and enslaved under a system of economics in which a few are literally granted the power to craft “wealth” out of thin air (by printing/typing things like dollars into existence), which is then used to effectively control and own everyone and everything beneath them. This is the purposeful slavery of fiat currency, and this is why God describes such a system as an abomination. (See: Proverbs 11:1 and Fiat $lavery: We have been bought and paid for…with nothing.)

And this is why it will all end.

Ultimately, this system cannot be sustained. This slavery cannot go on. It will come crashing down. It’s just a matter of time and context.

Because everything in God’s creation is bound, defined, and limited by His Nature as revealed in His Word, and His Word makes plain that abominations like the Corporate-owned American State and its economic system of fiat slavery cannot persist. They cannot last. They can only validate the unbreakable nature of God’s Word by breaking themselves upon it over the time that He gives them to do so.

This is the context in which we should advocate and personally pursue biblical approaches to economics by rejecting and opposing the anti-Christian State’s interference and control over our lives by every means made available to us.

When this beast falls – and it will soon fall – the Social Security checks won’t matter, if they even exist. The war machine scattered abroad won’t function. The food stamps and government “backed” pensions won’t flow. (See: Our Big Fat Greek Economic Future.)

There will be great pain in this and even greater opportunity.

May we repent and prepare accordingly…while there is yet time.