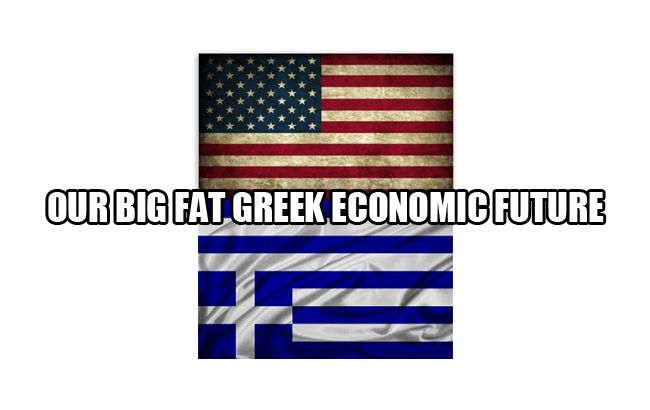 Last month in Greece is the word. (That nobody wants to hear.) we reminded folks of the many lessons to be learned and warnings to be had by way of the unfolding fiat-currency-fueled economic crisis in Greece. Later in Fake it ’til ya break it: What the Greek implosion tells us about America’s future. we continued to try and hammer home some critical facts that still seem to go basically unnoticed by a snoozing, apathetic and proud American population that is still somehow, some way convinced that something like what is happening in Greece “could never happen here”.

This is ‘Merica, after all.

In Fake it ’til ya break it, we wrote:

What would you do if you found out that banks in America were not going to open today – or anytime at all this week – and that all bank-held accounts were effectively frozen, with a $60 daily limit on withdrawals?

These sad realities are all connected, however much we may like to pretend otherwise.

Our rejection of Christ’s Nature as revealed in His Word as the foundation of our economics has made us every bit the doomed dependent serfs and slaves that we now see walking the plank in Greece.

Economics are God’s property. They are a reflection of His Nature in His creation. As such, any who take a perverted approach to economics will suffer the consequences, and nobody has perverted economics more profoundly than the American Corporate State.

Greece is a piker by comparison, but there are many great and important lessons for Americans watching the elite-run system of designed debt and dependency swallow up the Greek economy, people and state.

Now here we are about a month later and what more do we know about America and Greece?

Well, one nifty little tidbit to file under the “it could never happen in America?” header is that here in “the land of the free” and the home of the NSA, Planned Parenthood not only operates a “legally” protected nationwide network of mass baby butchering facilities, but it also often times goes to great pains to protect the living parts of the babies being murdered so that those parts can be sold for a profit once the baby butchering is done. (See: Selling murdered baby parts in America? Sure. Why not?)

We’ve also learned that the Boy Scouts of ‘Merica are now down with the idea of gay Scout Masters. (See: Boy Scouts of America get with the Big Gay Program.)

We’ve also learned that Detroit, in accordance with the “All-American virtue” of religious pluralism, has decided to openly allow the worship of Satan. (See: Detroit celebrates All-American “right” to worship Satan. [insert “U! S! A!” chant here].)

We’ve learned that polygamy is hot on the recently “legalized” heels of homosexuality where the profanation of marriage is concerned. (See: Polygamy in America? Sure, why not?)

These revelations aren’t even all of the “greatest hits of ‘Merica” over just the past month. This is only a partial list. Very partial.

Let that soak in as you consider the “it could never happen in America” meme perpetuated by the powers that be in America.

As for Greece, the economy is ablaze, currency controls are still doing their thing, and barter is becoming all the rage as a once respected country now filled with State dependents and managed by open Marxists is squeezed under the thumbs of the Monopoly Money masters presently (but temporarily) ruling the world in which we live. (See: Fiat $lavery: We have been bought and paid for…with nothing.)

The wrath of God is upon us…and in a much greater way than Greece.

The blood of tens of millions of our freely sacrificed babies screams from the ground, and God is not deaf to those voices. (See: 51,000,003 reasons why America owes Nazi Germany an apology.)

The pride and arrogance with which we persist in unrepentant rebellion is not lost on the Lord. (See: Will America repent or will America be destroyed?)

He is not winking at it. (See: Note to ‘Merica: There is no “God-given right” to worship false gods. Repent accordingly.)

He is not looking the other way.

He is not deaf to the ongoing loud and proud declarations of war by “We the People” against a King that they will not have to rule over them. (See: “Supreme Court” Votes for Wrath of God Upon America.)

He is bringing us to our end, either by hardening us before the kill, or breaking us into humiliated, broken repentance and submission to His will. Either way, our end is near. (See: Presuppositional Law: Where we begin with law determines where we end.)

And we shouldn’t want it any other way. (See: Roaring into Post-America Christianity.)