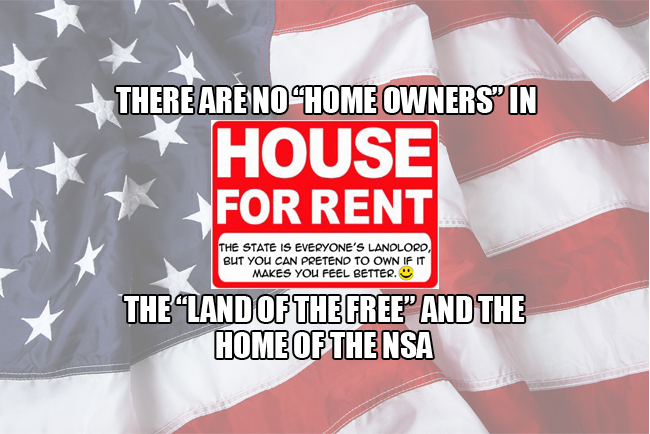 Y’all realize that there are no individual home owners in America, right?

There is only one: The State.

Something as simple and easy to understand (and desire) as “home ownership” is not and never will be allowed in “the land of the free” and the home of the NSA.

During a conversation that I had just yesterday, I was reminded how thoroughly programmed we as Americans have become when it comes to the State-sponsored redefinition of core concepts like “home ownership”. The reminder came when the gentleman with whom I was speaking – an intelligent, articulate man – made a particular point with regard to the nature of freedom, liberty and “the pursuit of happiness” as understood in the context of “the American Dream”.

As a part of his case for a particular (and quite common) understanding of how things were here in America, he included in one sentence the contention that “after all, one basic part of the American dream is to own a home, and…” I interrupted there to point out the one big problem with what he was saying, that being that home ownership is not allowed in America. Therefore it cannot be a real part of any actual “American Dream” as it exists in present day America.

He didn’t disagree at all. He agreed immediately, as though he knew that all along and I hadn’t broken any news by pointing to the fact that true home ownership is not allowed in America.

Yet he still used the concept and associates it with “the American Dream” and how things “work” here in America.

Because the same American Corporate State System of systems that has taken ownership of all of our homes has also encouraged us to imagine ourselves as either home owners or potential home owners, in much the same way that we are encouraged to view and proudly proclaim ourselves to be “free” people with things like “liberty” and “privacy”. (See: Privacy is for masters. Transparency is for slaves. Welcome to “the land of the free” and the home of the NSA.)

The American “home owner” fiction came up again yesterday when I was a guest on the Stand Up for the Truth program. (See: The Disintegration of Our Anti-Christ Culture.)

Here in the “land of the free” and the home of the brave, it is (often unconsciously) presumed that, at the end of the day and when push comes to shove, the State owns everything and everyone. This belief, though rarely openly acknowledged aloud, nonetheless manifests itself in the way that even most “conservative Christian” Americans now tend to blindly look to their beloved State for everything, including, most significantly, the State-managed “education” of their own children, which is the single greatest reason why we now routinely produce generation after of increasingly Statist American. (See: Redeeming Children’s Education: Confronting Our Satanic Approach to the Pursuit of Knowledge.)

Ironically, the funding of the very State-controlled children’s “education” systems is procured by way of…you guessed it…property taxes. So it is that multiple planks of the Communist Manifesto find themselves wrapped up and celebrated in America by the way of it’s cherished “public schools”. (See: How “free public schools” make us all renters from the State.)

So the next time you drive by one of these “free public schools” or read about how State-managed economics and education are leading people deeper and deeper into Statism, remember: None of this is accidental. And none of it hasn’t been explicitly addressed in the perfect, sufficient Word of God.

The trouble with us is that we’ve been conditioned to look away from that Word and toward the State and our favorite Pagan Right or Pagan Left “experts” for “leadership”…which is why we are all now renters and slaves here in the “land of the free” and the home of the NSA. (See: Fiat $lavery: We have been bought and paid for…with nothing.)

[Tweet “There is no such thing as “home ownership” in “the land of the free” and the home of the NSA.”]

Lord willing, we will soon be freed from these shackles and lies by God’s grace through His Gospel-fueled Great Commission right here in the land presently known as America…and not at all a “land of the free”…(See: Roaring into Post-America Christianity.)