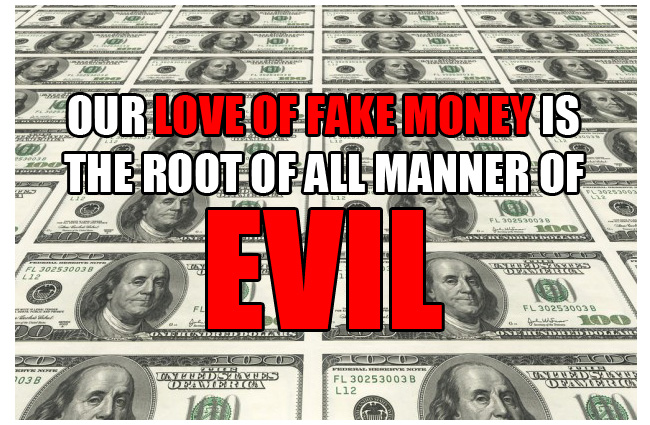 It’s funny how a major drop in the stock market helps to put things in perspective.

There are obviously a lot of things you can mess with, trample, and destroy here in America without much fear of serious repercussions…like the lives and bodies of little baby boys and girls, for example.

You can attack, mock, perpetually redefine, and strive to destroy family, marriage, and even gender.

You can attack, mock, perpetually redefine, and strive to destroy true church, religion, and spirituality.

You can openly worship any god you like, and openly mock the one true God. (See: Note to ‘Merica: There is no “God-given right” to worship false gods. Repent accordingly.)

You can openly murder and dismember baby boys and girls by the millions, sacrificing them on the altars of convenience and profit in the name of “liberty” and “freedom”. (See: Selling murdered baby parts in America? Sure. Why not?)

You can perpetually redefine law, liberty, freedom, justice, and even life itself. (See: Presuppositional Law: Where we begin with law determines where we end.)

You can do all of these things in America and you will get little in the way of meaningful, steadfast, and effective opposition from the vast majority of professing Christians in the land as long as you leave one thing alone: Our money.

Rank paganism may be openly taught in our schools (where we will still send our kids, of course) and practiced all across the land, the concepts of family and marriage may be disdainfully assaulted at every turn, and babies may be openly murdered by the truckload, but for most professing evangelicals in America, these things are all secondary concerns. Oh sure, they’re relatively serious subjects often inspiring at least semi-serious conversations and semi-serious “outrage” and perhaps even some serious prayer, but they all pale when compared to the far more primal and fiercely defended concern that we have for our own personal material comfort and perceived economic security.

Think of it this way: If it was announced today that the United States government, in response to a severe economic event, was going to freeze and/or seize every savings account, pension, IRA, and 401(k) in order to “save” the collapsing system and/or “protect” the people, how many of those people do you think would protest that confiscation and likely evisceration of wealth? How many would immediately, passionately, and relentlessly protest?

Maybe ten times as many as showed up this past Saturday to protest Planned Parenthood’s ongoing, multigenerational mass murder and dismemberment of baby boys and girls in America under the protection of American “law”, “liberty”, and “freedom”?

Maybe twenty times as many?

The hundreds of thousands who showed up to protest the open mass murder of babies for fun and profit would magically morph into millions and even tens of millions of wild-eyed, outraged, and fiercely determined activists if babies were replaced with money as the focal point of concern.

Because dollars, savings, and pensions are far more precious to us than baby boys and girls.

That’s why we have so few children these days.

That’s why we eagerly ship what children we do have off to the State for pagan/Statist “education”.

What makes this already gut-wrenching situation even more vulgar is the fact that the money we’ve been conditioned to adore and chase after at all costs isn’t even real.

It’s crafted effortlessly out of thin air by a self-empowered elite so that they might then control and effectively own everyone and everything beneath them, dictating the course of civilization through the controlled flow of this fake wealth. (See: Fiat $lavery: We have been bought and paid for…with nothing.)

And man, are they effectively controlling us or what?!

So as today’s little jolt gets the attention of “good conservative Christians” in America in a way that no Planned Parenthood expose video ever could, let’s make note of what is being revealed in these moments, however painful said revelations may initially be, and let’s thank God that He has lovingly provided us with all that we need to pursue true, God-honoring and culture-enhancing economics and business by way of the beautiful, perfect standards that He has made plain in His Word.

Wealth is not inherently evil.

The pursuit of wealth and the building of a great business is anything but inherently evil.

Money is not inherently evil.

Each and every one of these things can be an incredible blessing to individuals, families, communities and cultures when pursued and used in a Christ-centered, life-bringing manner.

It is the love of money that inspires all manner of evil (see: 1 Timothy 6:10)…like tolerance of the open worship of false gods; the open demolition of family and marriage; and the open sacrifice of baby boys and girls, for example.

When we allow the enemy to redefine everything from law, liberty and life in conjunction with the creation of fictional (abominable) “money” by which they are empowered to fund and fuel every evil enterprise acting in opposition to the Kingdom of God, we have nowhere to go but to the feet of Christ the King in broken repentance, begging Him for the grace and opportunity to rebuild our everything upon His Nature as revealed in His Word.

Including our concept of money itself.