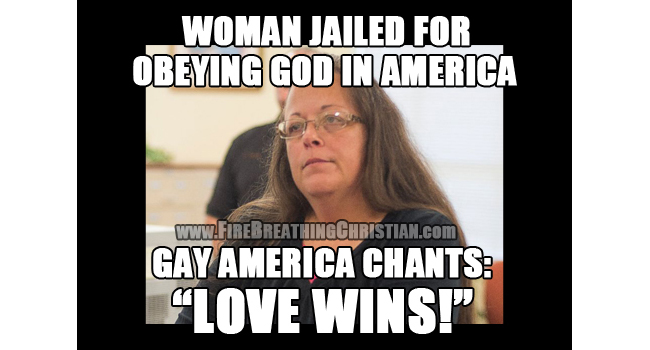 County Clerk for Rowan County, Kentucky – Kim Davis – was led off to jail today after refusing to issue licenses for “gay marriages” in direct violation of the unbreakable, unshakable, universally binding Word of God.

Welcome to the New America, where we are now reaping the full, foul fruit of “We the People” as God in practice. (See: Presuppositional Civil Government: Who we view as owning civil government determines how we will pursue civil government.)

In typical Pagan Right fashion, Republican Presidential Wannabe Mike Huckabee responded to news of Davis’ incarceration by tweeting out some very Christian sounding words that, when examined even just a little in light of the Word of God, actually turn out to be more of the same secular American Statism-enabling drivel that’s helped to produce a “land of the free” where obedient Christians are now jailed for being obedient Christians. Here’s the line to which I refer:

Kim Davis in federal custody removes all doubts about the criminalization of Christianity in this country. We must defend #ReligiousLiberty!

While I get and appreciate the first sentence here on one level, let’s just note for clarity’s sake that what is actually being revealed here is the criminality of the American State. By striving to criminalize Christian obedience and conduct civil government apart from submission to the Nature of God as revealed in His Word, the American State has revealed itself to be a criminal enterprise. The American State is the true and now completely out-of-the-closet criminal here.

Secondly, more significantly, and right on cue, Huckabee does the ol’ Pagan Right Winger switcheroo by employing language intended to lure Christians into supporting religious pluralism (which is exactly what The Huckster means by “Religious Liberty”), which just so happens to be something that the God of Christianity despises, clearly condemns, and is even now punishing us for embracing…thanks to the “leadership” of the likes of Mike Huckabee. (See: Note to ‘Merica: There is no “God-given right” to worship false gods. Repent accordingly.)

What we are actually seeing here – as enabled just as much by the Pagan Political Right as it has been by the Pagan Political Left – is the natural deterioration of law and government when severed from explicit subjugation to Christ as Lord. What we are seeing with the arrest of Kim Davis is not an attack on “religious liberty”, but an attack on those who would really, actually dare to stand upon the lordship of Christ in every realm of His creation, including the realm of civil government.

CBS covered today’s milestone (or is that millstone?) event this way:

“Her good faith belief is simply not a viable defense,” Bunning said, noting that allowing an individual’s beliefs to supersede the court’s authority would set a dangerous precedent.

“I myself have genuinely held religious beliefs,” the judge said, but “I took an oath.”

Get used to hearing that as Christians are jailed (and worse) for standing upon the Word of God in America.

It all comes down to this: Who is God?

Who is the ultimate Authority here?

In “Judge” Bunnings’ worldview – a worldview shared by even most professing Christians in America, the ultimate, true God in reality and therefore in practice is clearly The Almighty American State. (See also: Statism 101: State-run “education” makes a State-dependent population.)

This is where “We the People” as God in practice invariably and inevitably leads. (See: Presuppositional Law: Where we begin with law determines where we end.)

In Kim Davis’ worldview, at least as much as we can see of it from her stand, the ultimate, true God in reality and therefore in practice is…God.

Choose this day, America, which you will serve.

“And if it is evil in your eyes to serve the LORD, choose this day whom you will serve, whether the gods your fathers served in the region beyond the River, or the gods of the Amorites in whose land you dwell. But as for me and my house, we will serve the LORD.”