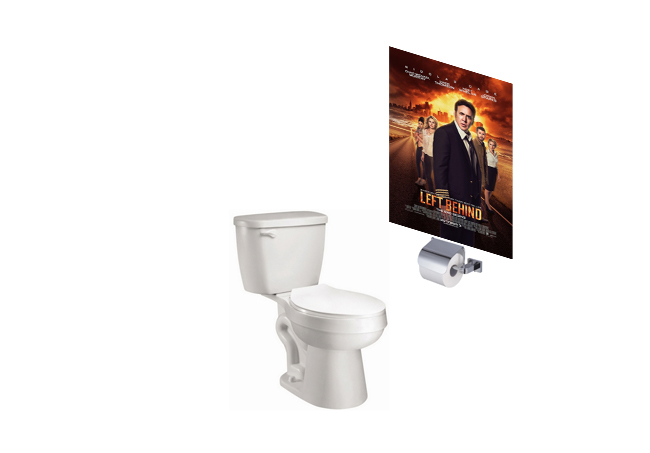 I remember reading a piece a while back about how when we thought of a particular thing, if we were to add to it the adjective “public”, the thing in question would instantaneously take a hard plunge pretty much straight down the qualitative rat-hole.

If we think of transportation, for example, it would be normal and reasonable to envision a sweet ride of some sort (be it of the two- our four-wheeled variety), like a nice car or a rockin’ Harley. Or maybe a cool mountain bike or even a jet plane. Maybe even something sci-fi supercool like the Millennium Falcon, battlestar Galactica, or starship Enterprise.

Transportation is fun that way. By God’s grace through the ingenuity of man, there are a whole lotta sweet options to consider and kick around when it comes to the subject of transportation. (See also: Enterprise, Falcon, or Galactica? What will Christians use to explore the restored cosmos?)

But refer instead specifically to public transportation, and things get a whole lot less cool and more depressing.

Giant, smelly, graffiti’d-up, beat-up old buses limping down the highway, or some similarly sad display of dysfunctional dilapidation on wheels (or rails) is likely to come to mind. Oh sure, there are certainly some exceptions to this general rule, but they are just that: exceptions. The expected and understood norm when it comes to public transpiration typically includes grime, neglect, stench, stains, graffiti and any number of other depression-enabling ingredients. That’s just how public transportation rolls.

A pinnacle example of the devastating impact of the “public” tag comes when it is attached to restrooms.

In and of itself, a restroom is a perfectly good and desirable thing. It’s important, convenient, and is generally understood to make life a whole lot better. The default image conjured in most minds by the term “restroom” is likely to be one of a clean and happily accessible conduit for daily relief and the improvement of life on a very practical level.

But slap the dread public tag on top and it becomes cringe-inducing. It becomes ugly and disgusting, often to the point of revulsion. Public restrooms are kinda notorious that way, and for very good reason.

Some may take that as a cruel, mean, or uncharitable shot. I want to be plain that this is both a general truth with many exceptions and that I am applying this general rule specifically to the realm of popular art, like Christian feature films, Christian contemporary/popular music, Christian comics, cartoons, etc.

I want to be very clear with both of those qualifiers. There is in fact a great deal of excellent, biblically sound and properly inspiring Christian art out there, but, as a result of the broader cultural (and sub-cultural) realities in place, most pursuit of true excellence in art from Christians occurs on the margins or entirely apart from the popular Christian subculture that now routinely cranks out and hypes the types of books, films, television shows, and music that ought to make Christians feel the urge to purge.

But short term economic gain trumps the pursuit of true artistic excellence in the average modern American professing Christian worldview. And with bad theology and eschatology (“end times” views) lighting the way, popular Christianity can’t help but bump into, absorb, and then crank our a whole lot of garbage.

The world is watching this happen.

It means that the name of Christ has become associated with the lowest, lamest, corniest understanding of art. That’s how the culture views and understands the Nature and lordship of Christ where it interacts with the arts.

One (tragically) excellent example of what we as Christians have become known for in the realm of pop art comes by way of last year’s attempted feature film re-launch of the Left Behind franchise. For those who have endured a viewing of this gem of pop-Christian ingenuity, even if said viewing was undertaken in the classic “this could be so bad that it might be good” sense, there was little positive payoff other than perhaps added clarity as to just how pathetic the pop-Christian worldview has become both in its theories and in its application.

Satan and Left Behind (the film and the eschatology)

Based on the gajillion-copy selling Left Behind book series which unceasingly parrots and relentlessly promotes an “end times” view that has taken root and defined eschatology for generations now in a mostly biblically illiterate American pop-Christian sub-culture, the new film does at least have a way of uniquely highlighting the bad eschatology that makes such films possible (and popular) in the first place.

If one believes that the Gospel-fueled Great Commission cannot actually do what it says here and now (see: Matthew 28),  – that it will fail – that the world is inevitably doomed, and that the worse things get here, the closer that means Jesus is to comin’ on down and doing what His Gospel-fueled Great Commission failed to do, then things like Left Behind make perfect sense. Both the book and the movie.

Why invest in the pursuit of true artistic excellence in film at the cost of decades of time and talent honing when the culture – including the arts – is just gonna get worse? Why would the talented spend their time and why should the Christian investor spend their money in such pursuits as truly powerful, beautifully produced, compelling, culture-shaping feature films when…it doesn’t really matter and all is lost anyway on the culture and artistic front?

Why bother? (See: Lowered Expectations: When the Gospel gets “Left Behind”.)

Where once – not long ago – Christian worldviews were crafting and engaging the culture with powerful, compelling, wildly popular and culture-shifting fiction – like Tolkien’s The Lord of the Rings and Lewis’ Chronicles of Narnia – we are now, thanks in no small part to the radically limiting and deflating end-times perspective promoted through Left Behind, consigned to a condition where Left Behind is perceived as “the best” that Christians – and, by extension, Christ – has to offer in this particular realm.

When one’s idea of the Great Commission has been so fundamentally deformed that it is seen as a mission to eek unbelievers into salvation under the wire by any unbiblical means necessary as the culture collapses around us right before the rapture, instead of the perfect calling by the King of creation to His obedient people so that they might actually make obedient disciples who do all that He has commanded right here and now, inherently impacting for the better all that they touch in culture by His grace and for His glory, then one at least ends up much more likely to crank out movies like Left Behind and movie posters like this: 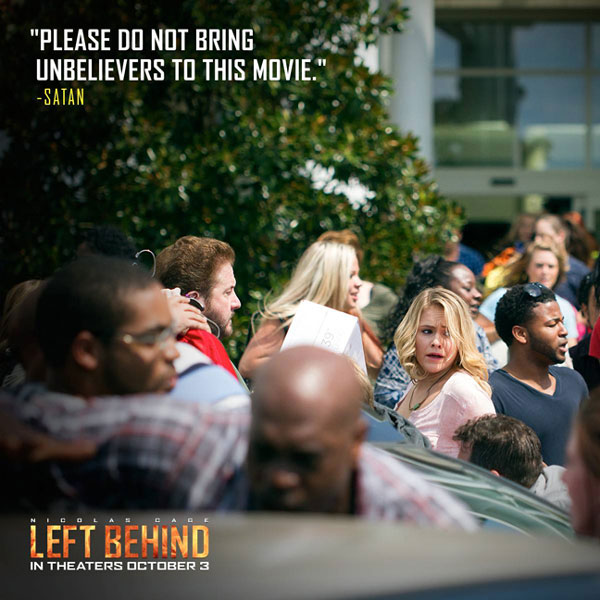 Leave it to pop-Christians to accidentally make Satan such a thoughtful, caring guy, at least where unbelievers are concerned.

So why are Christian pop-art submissions viewed by a watching world – often rightly – as dominating the bottom of the qualitative barrel?

I would submit that one primary contributor to the present condition of pop-Christian art is that the pop-Christian sub-culture has left the Gospel-fueled Great Commission behind. We have left it behind and latched on to the lamest of counterfeits in its place. And that lame substitution cannot help but come out – loudly and clearly – in our “art”.

Thus, in our embrace of bad theology, we have led the culture to ever-lower places in the realm of popular art.

Well, among other things, get serious.

Get serious about the Gospel-fueled Great Commission and its application in the artistic realm.

May the apathy-enabling, laziness-justifying, culture-surrendering worldviews of pop-Christianity past be forever left behind, so that, by the grace of God, His people might do all that He has commanded, for His glory and to their eternal benefit. 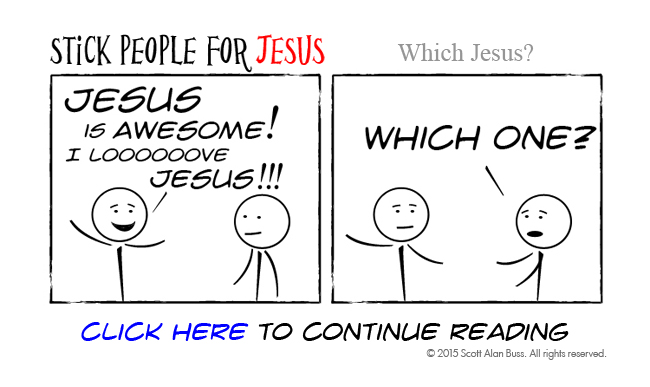