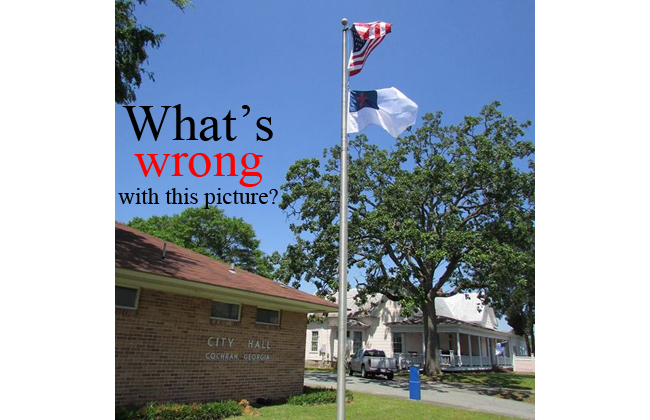 Symbols of power and authority.

You know that, I know that, and the powers that be atop the Corporate American State know that.

So it should come as no surprise that those powers have trained us since childhood to pledge allegiance on cue to the selected symbol of the American State’s “indivisible” political union and power. As a result of this programming, we’ve been left with no appetite or tolerance for allowing any other flag to fly above the carefully chosen and cultivated symbol of State authority.

Having trained us from childhood through State-controlled schools and corporate-controlled pop-culture to acknowledge and adore the American State as god in practice, we’ve been purposefully placed in a position of America idolatry by default, subjecting all else – certainly including Christ and Scripture – to the overarching authority of the State. As an expression of this worldview in action, the flag of the American Corporate State cannot ever be allowed to play a submissive role to any competing authority, including Christ and Christianity.

So if such a thing as a “Christian flag” is to be flown in proximity to the American flag, the former must be submissive to the latter. America is supreme. Christianity is submissive.

Which god, exactly? Well…does it matter? They’re all submissive to America anyway, right? They’re all equally viable under America, right? We’re “free” to worship whichever one of these lesser gods that we like as Americans, right? All that we need know is that, in practice, where the rubber meets the road here in “the real world”, America is the great god above all other gods. America is the source and defender of our lives, liberties and freedoms. America is the light of the world; the indispensable champion of truth, liberty, and justice for all. America is the god who submits to nobody…Christ included. (See also: Openly reject God’s First Commandment? YES! WE! CAN!)

So yeah, it’s pretty bad here in the oh-so proud “land of the free” and home of the NSA.

As we rocket deeper down the black hole of American State idolatry, we are seeing more and more clear manifestations and consequences of this idolatry.

According to a report by the Atlanta Journal Constitution published this week, there was recently another interesting illustration of this “new normal” in “God-fearing America”:

A traditional Christian flag flying over Cochran will come down Friday, after city officials bowed last week to threats of legal action and concerns over its impact on the city’s “fiscal resources.”

The controversy began early last month, when the Cochran City Council voted against the advice of its attorney to fly the flag at city hall to help promote a local Bible-reading marathon sponsored by the International Bible Reading Association.

A picture of the flag flying event in question was included at the Atlanta Journal Constitution site: 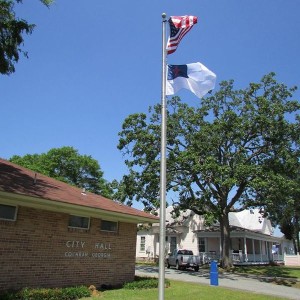 Before going on, let this image sink in.

Then consider how utterly normal all of these things have become here in the “land of the free” and the home of the NSA.

Now soak in this closing thought from the same Atlanta Journal Constitution piece:

In a statement on its website, the city said it has decided to take the flag down “after reviewing further input from the community, detailed written legal opinions from our city attorney and a second legal opinion from a constitutional lawyer.” In the future, the city said it would only fly the U.S. and state flags at city hall.

That’s right, here in ‘Merica, we bow to no god…including God! We submit to nobody and nothing but America itself. We are that exceptional. We are that special. And yes, we are that proud (and that doomed)!

So in this American pride-induced state of rebellion against the actual authority of God in practice here in this land, is it really just a weird and wacky coincidence that we are watching everything from family and marriage to economics and work be systematically redefined (or undefined) in a manner that empowers and enriches the Corporate State?

It sure doesn’t seem very coincidental. It actually seems right in line with where things like liberty, freedom, love, business, economics, patriotism and education are destined to purposefully lead a people once those concepts are severed from explicit connection and subjugation to Christ as King in practice.

The reason that we’re having our freedoms eviscerated at home, perpetual war overseas, and the intensifying disintegration of our culture and civilization into Corporate State dependence is that we have – as proud, programmed Americans – become idolaters of the State. We’ve become happy, compliant, and prideful American Statists. (See also: The America Idol: How “Christians” Worship and Enable the Anti-Christ State.)

We’ve become these things because the professing Christian church has largely forgotten and abandoned the all-encompassing, Gospel-fueled Great Commission and led us to Statism instead of to the world-defining Gospel of Christ. (See: Judgment begins with the Church…not the Democrats.)

Professing Christian churches have done this because they been led in large part by “conservative” “pastors” and “priests” who are, in practice, Statists themselves. (See: Why is the beast of Socialism eating our children? Ask your pastor.)

Truly, we have much to repent of…and that is where our first great opportunity lies.

Brokenness. Repentance. And then restoration.

We have the opportunity now to humble ourselves in brokenness and repent. That is the chance that we are being given even now in this late hour.

This is the only hope that we have.

This is the only hope to save any family, culture or civilization…one individual supernatural conversion and grace-fueled act of obedience at a time.

Lord willing, that brokenness and repentance will come so that true restoration may follow, all by God’s grace, all for His glory, and all to the eternal benefit of His people. (See: How to truly love (and really save) America.)

Lord willing, every idolatrous perversion of patriotism, liberty, freedom and love will be rejected, uprooted, and overturned by a people who seek to serve no god but God and no king but Jesus, here in America and everywhere else.