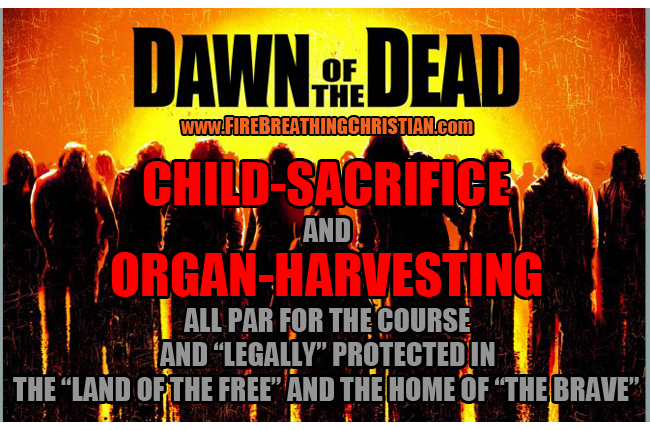 R.C. Sproul Jr. once appropriately noted that the topic of abortion is very much like the topic of hell in that if we allow ourselves to actually think about it for anything beyond the briefest of moments, it will drive us mad. The horrors of hell and abortion, when seriously contemplated in an honest, inquisitive manner, are simply too much for us to handle.

In a world driven (or at least significantly influenced) by coherent, Spirit-filled Christians committed to the Gospel-fueled Great Commission and the lordship of Christ over every realm of His creation, the forces of hell and abortion would thus be vigorously opposed and run through at every opportunity by faithful application of the Sword of Truth in the hands of God’s people, all by His grace, all for His glory, and all to their eternal benefit…and the benefit of the culture in which they live.

But here in our world, in an American culture led into darkness by a professing church that has abandoned the Gospel-fueled Great Commission and surrendered the civilization (and everything therein, including our children) to the enemies of Christ, we have very little of that. After generations of steady flight from Christ as Lord in practice and the progressive surrender of education, law, science, art, economics, and pretty much everything else to the enemies of the Kingdom of God, we are now beginning to see the full fruit of our apathetic, culturally disconnected approach to “Christianity”.

We’re beginning to get a good, heavy whiff of what rebellion excused by false piety produces in the end, and what it produces is: Death.

The death of law. (See: Our Suicidal Lawlessness.)

The death of justice.

The death of liberty.

The death of family. (See: How has “Christianity” paved the way for gender chaos insanity?)

The death of marriage. (See: “Supreme Court” Votes for Wrath of God Upon America.)

And, of course, the death of our own little babies…babies that we freely offer up for sacrifice on the twin alters of convenience and profit in the name of “liberty” and the “right” to choose to murder our own children. (See: Selling murdered baby parts in America? Sure. Why not?)

Welcome to ‘Merica: The “land of the free” and the home of “the brave”!

While so may of us still claim to love Jesus with our lips, most of those doing the claiming have no appetite for identifying sin, much less confronting it in pursuit of holiness as we have been commanded to do. Instead, most professing Christians in America just hunker down and bemoan what they tell themselves are the inevitable horrors of the day while simultaneously cheering them on, since the horrors in question can only mean that Jesus is on the verge of swooping down to whisk them away before cleaning up the whole ugly mess Himself. (See: Limp Wristed Gospels Make Limp Wristed Cultures.)

There is no sense of the Gospel and Great Commission being the means by which He has ordained to confront, correct, and “clean up” enemy forces here and now. With that great, supernatural hope and purpose lost, we have swung wide the gate and opened our land up to all manner of evil…including zombies.

As LifeNews reported today, the latest expose video released by The Center for Medical Progress catches Planned Parenthood harvesting the brain of an aborted baby who was still alive:

The video features Holly O’Donnell, a licensed phlebotomist who unsuspectingly took a job as a “procurement technician” at the fetal tissue company and biotech start-up StemExpress in late 2012. . .

The new video includes O’Donnell’s eyewitness narrative of the daily practice of fetal body parts harvesting in Planned Parenthood abortion clinics. She tells the harrowing story of harvesting an intact brain from a late-term male unborn baby whose heart was still beating after the abortion.

“‘I want to see something kind of cool,’” O’Donnell says her supervisor asked her. “And she just taps the heart, and it starts beating. And I’m sitting here and I’m looking at this fetus, and its heart is beating, and I don’t know what to think.”

O’Donnell also tells how her StemExpress supervisor instructed her to cut through the face of the fetus in order to get the brain.

“I can’t even describe what that feels like,” she says.

This is where we are, America.

This is where Christ-dismissing law, liberty, and justice takes any prideful, rebellious people…including “We the People”. (See: Presuppositional Law: Where we begin with law determines where we end.)

And it will get much worse until and unless we repent and submit to Christ as King in practice.