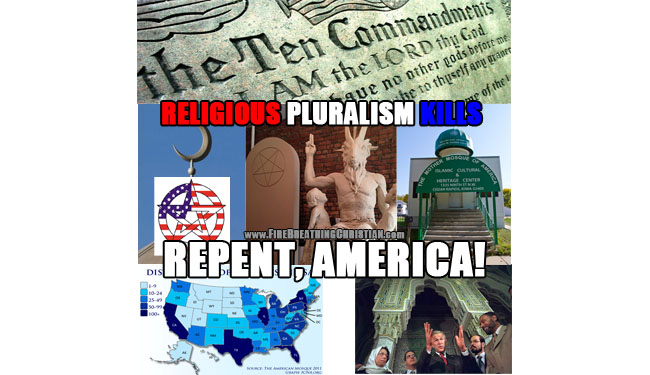 One of the weirdest and most telltale signs that we’ve become a people completely disconnected from reality is the way that here in America, even most “conservative” professing Christians have come to cherish and defend the concept of religious pluralism.

The idea that we have the “God-given ‘right'” to worship any god or practice any religion that we choose has become a defining jewel in America’s crown of pride and self-delusion. The “freedom to worship” any god is a centerpiece of the American worldview and foundational to America’s identity…which pretty much explains in a nutshell why we are where we are now as a culture.

Even our favored conservative “experts” and “leaders”, while almost always claiming Christianity, nonetheless relentlessly lead us along this path of religious pluralism, encouraging us to “stand up for the ‘religious liberty'” upon which America was built and upon which it must stand.

Even as we commemorate the 9/11 attacks we are now encouraged by our “conservative Christian” leaders to defend and enable the “God-given ‘right'” to open propagation of Islam and Muslim worship in America. The question begging to be asked here is: “So which ‘God’ gave us this ‘right’?” If America is serving a god in all of this propagation of religious pluralism, it sure isn’t the God of Christianity.

Even so, all of this defense and adoration of “religious liberty” (and therefore the many (infinite) other gods empowered by it) is relentlessly pitched as a basic duty of all good and properly patriotic Americans. “Religious liberty” must be defended no matter the cost…literally…

After all, this is the same “religious liberty” we must as good conservative Americans defend for witches. (See: Religious “Freedom” Update: Witch leads American heartland “lawmakers” in “prayer”.)

And it’s the same “religious liberty” that we good conservative American patriots must protect for Satanists. (See: Detroit celebrates All-American “right” to worship Satan. [insert “U! S! A!” chant here])

You know, that “religious liberty”.

Is anyone else’s head spinning yet?

Is anyone else hearing Twilight Zone music?

Do “We the People” even care?

Well, whether we care or not or like it or not, He has spoken, and with clarity:

And God spoke all these words, saying,

You may recognize this as number one of The Ten Commandments, found in Bibles as well as on all sorts of publicly displayed monuments, plaques, and statues fiercely defended (the statues; not the actual commandments) by “conservative Christians” all across the fruited plain…while the very same people automatically dismiss and openly trample the very commandment from God that is at the top the list.

When God says that we are to “have no other gods before” Him, He is not saying that other gods are okay as long as they’re not placed above or beside Him. That’s not the idea being expressed here at all. This is not God making an argument for a hierarchy of false gods that is somehow acceptable so long as we place Him atop the pile in some symbolic way. That is a wildly blasphemous (and very American) concept.

Which brings us to America.

Here in the “land of the free” and home of the NSA, we’re all about the proud adoration and defense of our “right” do to exactly that which God has explicitly condemned and forbidden, namely: Openly worship any god we like. (See: Note to ‘Merica: There is no “God-given right” to worship false gods. Repent accordingly.)

So the next time you’re “wondering” why we’ve completely come off the rails and are now proudly (and suicidally) proclaiming the “legality” of “gay marriage” and the long-running “legality” of child sacrifice in the name of convenience and profit, please understand that there’s no need to wonder. There’s no real basis for confusion here. This is not some great baffling mystery requiring some supernaturally empowered Columbo or Perry Mason to figure out.

We have deteriorated to this level over the past 200+ years – with the rate and trajectory of our decline increasing greatly as we go along – because we have first disregarded the crystal command of God to forbid the open worship of false gods in our land.

I know, I know…this all sounds so very un-American of me…which is precisely the point.

When “conservative Christian” wannabe “leaders” and “experts” like Mike Huckabee, Ben Carson, and every other Pagan Right Wing political advocate try to woo (as they always do) conservative Christians with appeals to the importance of “religious liberty” (by which they always mean religious pluralism, which God despises), they are leading us deeper and deeper into darkness and ruin.

I know it’s hard. I know it’s challenging. I know it grates against the All-American core we’ve been programmed to embrace since toddlerhood through State- and Corporate-owned “education” systems and pop culture, but we have to shake off the lies. The hour is late and it’s getting darker by the second. We really need to take hold of this hard truth and repent accordingly.

Right now…while there is still time.

We’ve been allowing these Pagan Right Wing Statists to educate, manipulate, and use us for generations now. It’s well past time that we stopped supporting them and started actively opposing them.

It’s time that we stopped feeding our children to them for “education”. (See: Statism 101: State-run “education” makes a State-dependent population.)

They really do adore and will always encourage us (and our children) to embrace the God-hated concept of religious pluralism. They really and truly believe that all “lesser gods” ought to be freely worshipped as a sort of placebo for the masses, so long as said masses understand clearly that the true God above all others in practice is the Almighty State.

In this America is not different from Rome at its core. The State is god in practice, and anyone who will not acknowledge this and submit accordingly must  – and will – be punished.

If we want to actually deal with the problem of Islam in America, we will have to reject the “religious liberty” approach of our Pagan Political “leaders” and experts. (See: Fox News Equates God’s Law With Islam. American “Conservative Christians” say, “Amen!”)

If we want to successfully address the problem of Witchcraft and Satanism in America, we will have to repent of our enabling them through this satanic construct of “religious liberty” and submit to the loving rule of Christ as King in practice. (See: Well color me satanic and call me America!  Or: How our cherished tolerance for false gods is killing us.)

If we don’t want witches leading our “legislators” in “prayer” anymore in America, we have to repent and submit to the God we’ve mocked through our perverse approach to “religious liberty”.

See again how profoundly un-American all of that sounds these days?

And that should tell us all we need to know about America and where she stands in the eyes of the one true God…who will not be mocked by any nation…’Merica included (see: Psalm 2).

May He grace us with repentance and restoration while there is yet time.