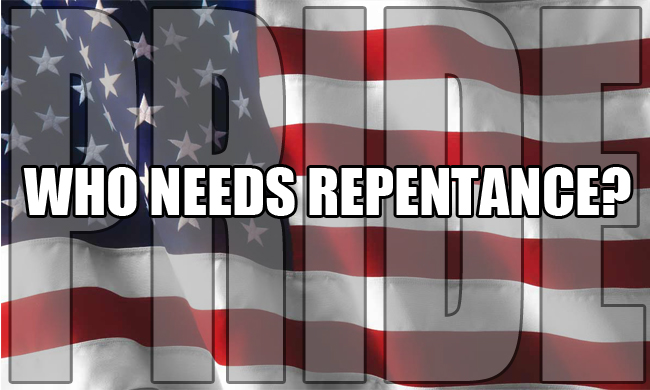 Especially when you have the world’s largest military and the world’s reserve (fictional) currency? (See: Fiat $lavery: We have been bought and paid for…with nothing.)

Especially when good ol’ America-centered American pride has gotten ya this far, right? (See: How’s that Pagan “conservatism” workin’ out for ya, Christian?)

Who needs to actually surrender and submit to the lordship of Christ right here and now when it comes to things like law, education, economics, and civil government?

Especially when “We the People” are still determined to imagine ourselves to be in charge around here? (See: Who owns America?  Hint: Not “We the People”.)

Who needs to ditch pride and humbly beg the King of kings for forgiveness, guidance, and restoration…before he justly destroys us? (See: Psalm 2)

Not America…at least from the perspective of most Americans, including most “conservative” professing Christian Americans.

But not for America.

This seems to be the All-American sentiment of our generation, which also happens to be one of the biggest reasons why, at least for now, Donald Trump’s promise to “make America great again” apart from anything even remotely resembling broken, begging repentance and humble submission to Christ as King is captivating and inspiring masses of unrepentantly proud Americans.

In helping us get a feel for the worldview of this mass of Americans, many of whom proudly self-identify as “conservative Christians”, Bloomberg recently ran an interesting piece describing how The Donald recently “clarified” his position on repentance:

In an interview segment released Monday by the Christian Broadcasting Network’s “The Brody File,” the billionaire reversed himself from a statement he’d made earlier this summer that troubled many Christian conservatives.

“Do you believe that it’s important to ask God for forgiveness?” David Brody asked Trump in an interview recorded in California on the eve of last week’s candidate debate.

So there we are. It’s all good now.

Good enough, anyway, as in: Good enough for most “Christian” Americans. After all, isn’t The Donald just proving to be “one of the people” on this one? Isn’t this an actual point of genuine overlap between the professing Christian billionaire and the average professing Christian American who is supportive of his run for President?

Trump was among eight Republican candidates who spoke Saturday evening in Iowa at the Faith & Freedom Coalition dinner, a gathering of social conservatives. He made no mention of asking for forgiveness during his 20-minute appearance there, but he cozied up to the crowd in other ways.

“I brought my Bible,” he said. “I also brought my confirmation picture.”

So what is this, picture day?

And again: It’s all good with most professing Christians in America…which is precisely why we have the America that we have now. (See: Judgment begins with the Church…not the Democrats.)

Accompanying the Bloomberg piece was an equally depressing/revealing poll centered on the following question:

“Donald trump says he is a Christian and goes to church but never has asked God for forgiveness. Does this bother you or not?”

Among Republican respondents, 57% said it does not bother them. 36% said that it did bother them. 6% were unrepentantly unsure.

Among “Christian conservatives”, 59% were bothered, 36% were not bothered, and 5% were unsure.

The further we go along our proud, All-American, “We the People”-worshiping way, the more apparent it becomes that America should – and will – die. (See: Roaring into Post-America Christianity.)

Come what may, the people and Kingdom of Christ will persevere. They will, by His grace and for His glory, make all things great again…whether America is around to see it or not.