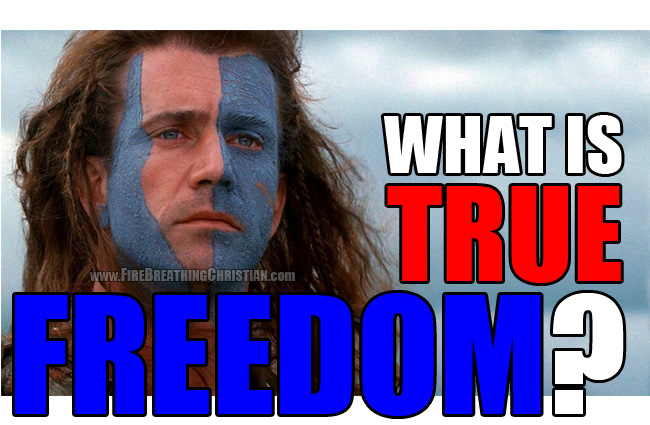 We have little to no real privacy, we can’t even fully own a home, we can’t stop openly sacrificing 1,000,000+ of our own babies each and every year, and yet we still sing about how “free” we are and are convinced that we are “a shining city on a hill” for all the world to emulate. (See: How “free public schools” make us all renters from the State.)

When we actually look at what we’re doing (and not doing) here in the “land of the free” and the home of the NSA, it sure seems like we have a fundamentally warped and perverted notion of “freedom” in America.

As Americans, we’re not really conditioned to associate freedom with subjugation.

We’re relentlessly told, sold, pitched, and propagandized the self-serving, pride-fueling notion that freedom is what naturally flows from the absence of subjugation.

If it feels good, do it.

We make the rules as we see fit.

We make law as we see fit.

We define (and perpetually redefine) every term and concept in “our world” according to our opinions and feelings.

Anyone hearting echoes from Eden in this? Specifically, echoes of a certain pitch made by a certain serpent?

Either way, this is how “We the People” have been conditioned to think, feel, and live for a very long time now.

This is how the true religion of America in practice – American Statism – has managed to manipulate us into the deep, multi-layered dependence and desperation in which we find ourselves today.

The counterfeit freedom we’ve come to adore leads us deeper into bondage and despair by the moment. While it claims to “make us free” to worship any god we like, marry any person (or thing) that we like, say anything that we like, and do anything that we like, in truth we are increasingly experiencing the opposite of true freedom in every realm of American life as we continue to cling to the lie that “We the People” are able to define our own reality as we go along.

This satanic model of freedom has made and will only continue to make us slaves until and unless we repent of our pride and submit to the active rule of Christ over us.

As with any other force or concept in all of God’s creation, freedom is only as real and as good as it is explicitly rooted in and subjugated to the Author and Sustainer of true freedom: King Jesus.

So while freedom is a supernaturally beautiful thing, it is only so when it is defined by the Nature of the perfect Son of God as revealed in His perfect Word.

While things like truth and freedom are reality-defining concepts and forces in God’s creation, we need to remember that they not only operate in His creation, but they are born of, dependent upon, and sustained by His very Nature. They are more than His mere property; they are a part of Him personally.

It is only the truth of His personal Nature as revealed in His Word to His people through His living Spirit within them that can ever really and truly produce real freedom anywhere in His creation:

“If you abide in my word, you are truly my disciples, and you will know the truth, and the truth will set you free.”

His Nature is literally the binding, defining reality for everything in His creation – politics, law, civil government, economics; every realm and area of life – and it is all directly impacted and called to restoration through His reconciling work on the cross:

This is why we are commanded and equipped to take every thought – and thereby every physical action – captive to Christ:

This is how we are called and equipped to advance true freedom throughout His creation, all by His grace, all for His glory, and all to the eternal benefit of His people:

“All authority in heaven and on earth has been given to me. Go therefore and make disciples of all nations, baptizing them in the name of the Father and of the Son and of the Holy Spirit, teaching them to obey all that I have commanded you. And behold, I am with you always, to the end of the age.”

So what is freedom?

Or  better yet: Who is freedom?

Only when that question is both rightly answered and faithfully applied will true freedom reign here and everywhere else…all by God’s grace, all for His glory, and all to our eternal benefit.