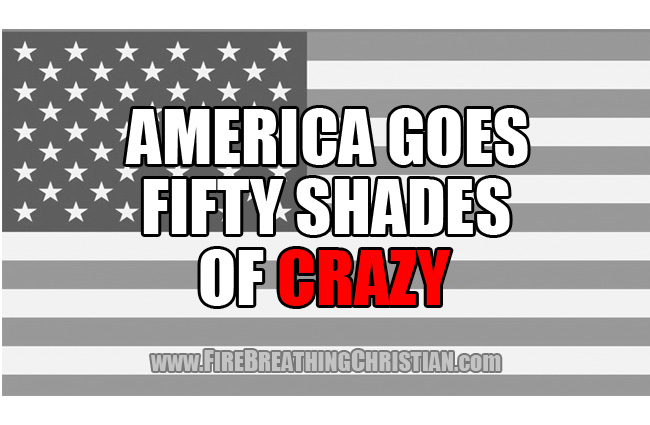 So God says certain things are lawful (or permitted) in His creation, and other things are unlawful (meaning inherently destructive and forbidden).

So how’s this approach to law working out for us?

How’s this “We the People” as God in practice deal going?

Earlier in What Miley Cyrus’ all-nude concert tells us about us, we noted the long-suffering, incalculably patient grace of God in not snuffing us out long ago and instead choosing to give us even more flagrant warning signs to witness as His Gospel command to repent and submit to Christ as King in practice goes forth.

Now let’s have a look at another giant burning red flag waving over the sinking, rotten (but still quite proud) American culture. As The Daily Mail reported this week:

A British sex party organizer is taking her hedonistic business to the South as she reveals her sexually charged events are launching in Nashville and already attracting new members from the country music capital of the world.

Emma Sayle, 37, founded Killing Kittens, an international company dedicated to helping women explore their fantasies, a decade ago, and the members-only club celebrated its 10-year anniversary with a party in its home city of London on Saturday. And after launching in New York and Los Angeles earlier this year, Emma is already looking forward to conquering more locations across the pond.

‘Nashville has been on my bucket list for years, I’m such a country geek,’ Emma, who recently penned a memoir, Behind the Mask, which details the launch of her business, and was just released in the US, told Daily Mail Online, before noting: ‘It is the Bible Belt, so I’m just waiting for the abuse.’

But is there really any cause for Ms. Sayle’s concern?

Is there any real basis for expecting her “business venture” to be anything worse than legally protected and allowed to openly (and profitably) operate in the “Bible Belt” of America?

Such “legally” operating businesses are perfectly normal around here.

Isn’t that what “freedom” and “liberty” are all about?

Isn’t that what freedom means these days in ‘Merica?

Of course it is….and it’s been that way for a very long time.

The reason that we complain about all manner of rank evil openly pillaging the culture before our confused, frustrated little eyes but won’t actually do what Scripture commands to address the wave of darkness is that we as Americans have thoroughly embraced an utterly satanic concept of freedom.

We will not have Christ to rule over us.

We will not have His Law.

This approach has left us slaves to sin and the men who would rule over us in Christ’s place.

Just as Scripture said it would. (See: Presuppositional Law: Where we begin with law determines where we end.)

We actually believe that the Law of Christ is a burden; that it is inferior to the “laws” and works of men.

We call that approach to freedom “a virtue” ’round these parts.

We’re proud of our enlightened understanding and appreciation of such liberty and we hold it high every chance we get for the world to emulate.

Who do we think we’re kidding here in “Bible Belt” America…besides perhaps ourselves.