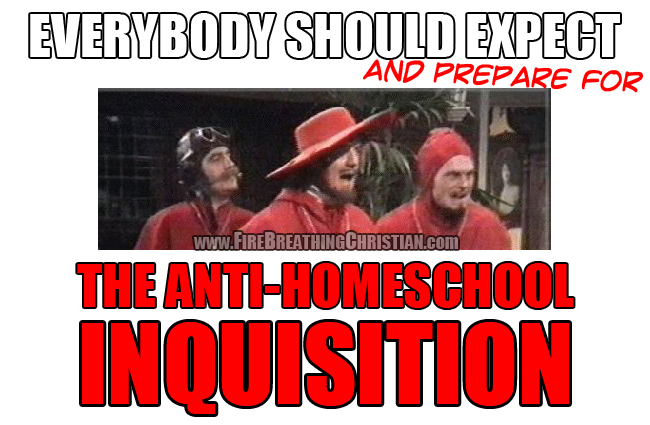 Last week in America’s Fear and Loathing of Christian Homeschoolers, we highlighted an article by American Vision’s Dr. Joel McDurmon in which he methodically chronicled the lies driving a ridiculously contrived “case” against a homeschooling family in Texas.

McDurmon has recently followed up with a very important article alerting homeschoolers as to some serious freedom-threatening maneuvers being attempted through this case. In his follow-up post – which I highly recommend to all Christian homeschooling parents – McDurmon opens by sounding an alarm:

Homeschoolers, you need to read this. Last week I posted the true story behind the media lies about the El Paso Independent School District’s attack on the McIntyre homeschool family. Now I realize why they were doing so, and the legal implications are actually quite frightening. What it boils down to is an attempt by the left to get courts to allow the school district officials to have immunity from lawsuits when they break the law harassing and persecuting homeschoolers. If this can be achieved in Texas, it could set a precedent for this type of harassment nationwide.

Before moving any further, I think it’s important to note that in using phrases like “sounding an alarm” and a title like Anti-Homeschool Inquisitors Seek Immunity from Law for this article, the last things I’m aiming to convey here are fear and panic. Far from it. While it is perfectly accurate to use terms like “frightening” and “horrifying” to describe certain things in a certain context, we are not about the business of promoting fright or horror in the sense of true fear of anything that any man or man-made system may do to us here in this life.

As Christians, we do not fear man. Fear is the antithesis of faith. Fear of man has no place in the Christian life and worldview. It should be no surprise then that the fear of man is routinely promoted and easily used by our enemies to manipulate, disarm, and control us in any number of ways. That man-centered fear always acts to pull us away from the loving obedience inspired by a healthy, life-preserving fear of the Lord.

So as we tackle the sometimes “scary” subject of Anti-Christian-homeschool zealotry, let’s be clear that we are not truly afraid of anything that men may be doing or planning to do here or anywhere else in God’s creation.

That said, we do need to be vigilant. We need to be diligent. We need to stay frosty and alert to the plots and maneuvers of our enemies. We need to prepare, fight and live in a manner consistent with the Spirit and Great Commission given us as Christ’s people. We must do so confidently, resting and trusting in Him completely to perfectly handle the consequences of our obedience.

It is in this context that we must continually prepare for the battle that has long been raging around us in the realm of children’s education.

None of this should be surprising.

After generations and generations of American Statism promoted and nurtured through State-controlled children’s “education”, we should have always expected that it would come to this. We should’ve expected that upon realizing the incomparable threat posed by Christian children raised in accordance with Scripture, American Statists (many of whom claim to be “good conservative Christians”) would seek to do whatever it takes to snuff out that threat. (See also: Statism 101: State-run “education” makes a State-dependent population.)

While I hope, pray, and trust that the Anti-Christian-Homeschooling Inquisition will find fierce, determined, unwavering opposition as they mount their ultimately futile attack upon the grace-enabled people of God, what I hope and pray that they will not find is fear.

We have nothing to fear in these people.

We have nothing to fear in what they do or what they want to do.

We have every reason for concern and calm, cool, corrective confrontation of their lawless designs, but we ought never fear them in the sense that they would very much like for us to. We should instead pray for their salvation and seize every opportunity to model and educate them in accordance with the Truth that we’ve been given, all by God’s grace and all for His glory.

So man up, Christian.

Prepare for the battle that is at hand.

Remember: They fear us. And appropriately so. Nothing apart from their supernatural conversion and submission to Christ through His Gospel-fueled Great Commission will change that.

We and our children are, by God’s grace, far and away the greatest threat to the very foundations of their entire worldview. They understand that much instinctively and will act accordingly. This is why they covet the notion of forced compliance and control through the State. This is why they seek to intimidate and bully their way to a dominant position.

But like most bullies, they are mostly emotion-driven noisemakers incapable of overcoming bold, principled, determined opposition.

While they should (and do) fear us, we should never return the favor.