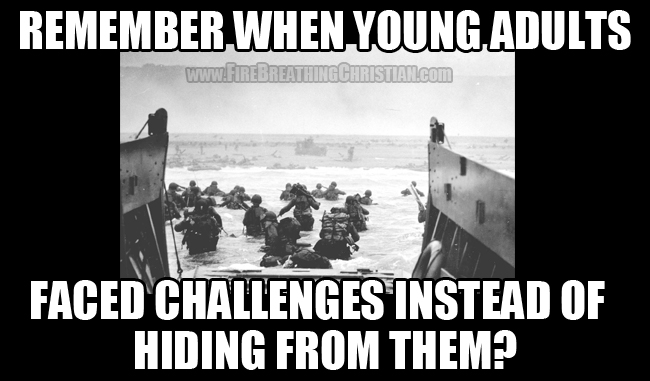 Human history is loaded with examples of young men and women doing what would today be considered amazing things on a fairly routine basis. Oh sure, there were standouts who led soldiers or built businesses in their early teen years, but the norm – the standard expectation – not so long ago was for young men and women to pursue depth, maturity, and challenge in ways utterly foreign to the coddled, pansified perpetual children of today.

Through our embrace of wildly unbiblical fantasy concepts like adolescence in conjunction with a long entrenched satanic approach to the pursuit of knowledge (aka “education”), we’ve managed to create a bizarrely tragi-comedic cultural situation here in “the land of the free” and the home of the self-described “brave”.

The Telegraph served up another heaping helping of “how pathetic can American ‘higher education’ get?” by way of an article titled How political correctness rules in America’s student ‘safe spaces’. Here are a few of the high/low points:

As the law professor prepared for her class on sexual assault, she opened her emails to find a strange request: could she give assurances that the content of the class would not be included in the end-of-year exam, her students asked?

They were concerned there might be victims of sexual assault among their classmates, they said. Anyone in that position could be traumatised at being confronted with such material in the exam hall.

Across the United States, lecturers have received similar messages from students demanding that modules of academic study – ranging from legal topics to well-known works of literature – be scrubbed from exams, and sometimes from the syllabus altogether.

Jeannie Suk, a professor at Harvard Law School, which numbers President Barack Obama among its many notable alumni, cited an example where a student had asked a colleague “not to use the word ‘violate’ – as in ‘does this conduct violate the law’ – because the term might trigger distress”.

There, I said it.

Or typed it, anyway.

Did you manage to somehow pull through that unrelenting barrage of insensitivity to your potential personal perception of distress?

Your Purple Heart is in the mail.

Now back to the Telegraph piece:

Far from the bra-burning, devil-may-care attitudes at universities in the Sixties and Seventies, today’s generation of American students increasingly appears to yearn for a campus ruled by dogmatic political correctness, in which faculty members assume the role of parents more than purveyors of academic rigour.

The lexicon of college has changed: students now speak about “micro-aggressions”, “trigger warnings” and “safe spaces”.

The notion of the “safe space” first emerged to describe a place of refuge for people exposed to racial prejudice or sexism. But the phrase has changed meaning to the point where now it often implies protection from “exposure to ideas that make one uncomfortable”, according to Nadine Strossen, a prominent law professor and former head of the American Civil Liberties Union.

“Land of the free” and home of the…whatever.

At Brown University – like Harvard, one of the eight elite Ivy League universities – the New York Times reported students set up a “safe space” that offered calming music, cookies, Play-Doh and a video of frolicking puppies to help students cope with a discussion on how colleges should handle sexual assault.

I think we’ll just pause there at the “Play-Doh and a video of frolicking puppies” reference.

This is what happens to a culture that insists on [*ahem*] violating the unbreakable Word of God, refusing to have Christ rule over them in practice and in detail.

[insert frolicking puppy video and “U! S! A!” chant here]