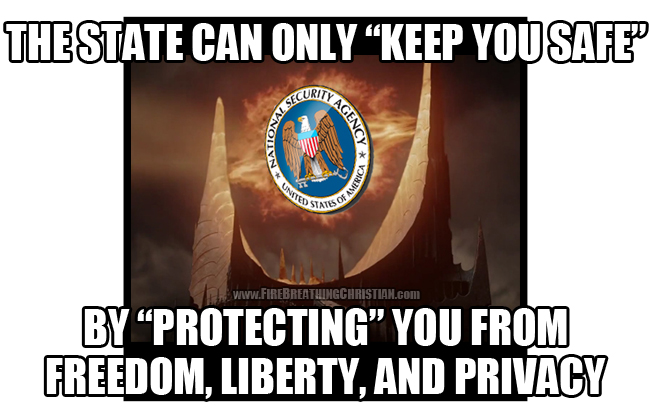 Wanna make a professing Christian in America roll their eyes and laugh out loud? Maybe even make ’em point, smirk, dismiss you as utterly disconnected from reality and accuse you of not living in “the real world”?

If so, just try this: Calmly and clearly state that we as people here in “the real world” (as in: God’s world.) are in fact to really, truly, and practically rely upon God  – and not The State – to provide and sustain our security.

Yeah, say that out loud and you’ll be tagged as a nut before you even finish the sentence.

Here in ‘Merica, we’ve been poked, prodded, and programmed for generations now to believe that it is The State who is charged with the responsibility to monitor us, manage us, and protect us from all manner of harm that we might do to ourselves if we were left with the freedom, liberty, and privacy described in the “extreme, legalistic” pages of Scripture. So it is that we have traded in the life-, liberty-, and freedom-enabling truth of the Christian religion and worldview for the life-, liberty-, and freedom-crushing darkness of the religion of American Statism…all while claiming to still be Christians , of course. (See also: Disciples of the State: 10 ways that State-run “education” is (purposefully) killing us.)

In Political Opportunism Doesn’t Fight Tyranny, It Perpetuates It, posted last month at Axe to the Root, Bojidar Marinov makes more than a few important, thought provoking points. One that I’d like to focus on here is his reminder that, contrary to what we’ve been conditioned to believe about the role and nature of The State (via State-run “education” and the like), public safety and security are not Biblical functions of the God-ordained (and therefore God-defined) institution of civil government:

. . . The Biblical function of government is justice, that is, resolution of conflicts and punishment of crime. Safety and security are left to God, and to the families themselves, not to the government.

Why is this difference important? Because from a covenantal – that is, ethical/judicial – perspective, the two functions, justice and safety, have completely different starting points, and involve completely different modes of action. It is true that indirectly, safety is a secondary product of righteous justice. But what is often missed by many Christians is that when safety is made the primary purpose of the state, it destroys justice and establishes tyranny.

In the Bible, civil government is primarily a negative institution; that is, it doesn’t have any function of providing a positive product to the society. For the most part, the state is supposed to be inactive except when a crime is committed, or a dispute arises between private persons which can’t be resolved by private conflict resolution. . .

Contrary to this, the task of safety and security is a proactive task, and it requires preventive justice, a concept that is completely anti-Christian and idolatrous. . . the task of safety and security, when carried out by the state, requires government control over non-criminal individuals. Such control is inevitable, and there is no way to limit it to criminals only; after all, if a person is a known criminal, the crime would have been already committed, so the action needed would be justice, not safety. Only God has the prerogative to see the heart of a man; when the state takes this prerogative to itself, it declares itself divine.

Thus, those who call for the government to provide safety and security – as opposed to the Biblical task of only retributive and restitutional justice – are calling for open judicial idolatry. And since idolatry always brings tyranny, they are calling also for judicial tyranny. From the Jacobin Committee of Public Safety, through the Nazi SD (Security Service) and SiPo (Security Police), Mussolini’s TULPS (Laws for Public Safety), the Communist KGB (Committee for State Security) and Stasi (State Security), to our modern American Homeland Security, Transport Security Administration, and National Security Agency

How does this impact you, my fellow Americans?

How does it move you?

Does it make you angry as a “proud American” who wants to be “taken care of ”  and “protected” by the American State as the American State sees fit using whatever means the American State deems necessary? Do you not take kindly to the inherent goodness and virtue of the American State being challenged or to having things like biblical commands “interfere” with the operation of America here in “the real world”? Does the view of civil government expressed by Bojidar Marinov make you want to deride and dismiss the author and those who share his understanding on this point as a bunch of over-zealous religious nuts who are unworthy of serious consideration…so that you don’t have to pursue a biblical response to the case they’ve made while still claiming to be a Christian who “loves Jesus” and the Bible?

Or do challenging revelations such as these convict you and inspire you to investigate further, testing all things  – even your most cherished notions of patriotism and the nature of America itself – in the perfect light of God’s Nature as revealed in His Word?

What is the role of The State according to the God who created the institution in the first place?

Wouldn’t it be cool if God’s people in America began to take that question seriously, pursuing and applying the answer right here and now in “the real world”, just as He has commanded and equipped them to do (see: Matthew 28:18-20)?

Can you smell the true freedom, liberty, and security that lies on the other side of that mission?