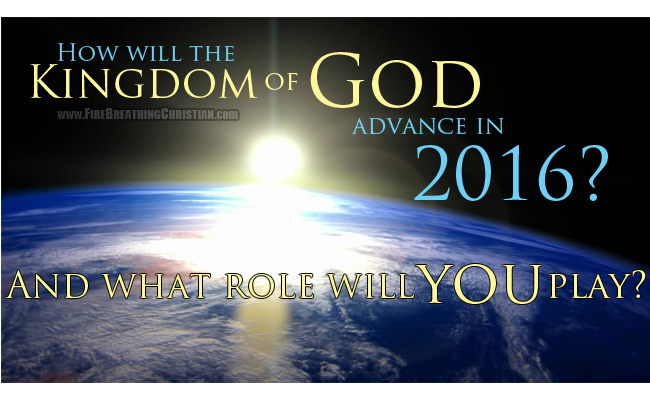 Now what are we gonna do about it?

More specifically, how is the Kingdom of God going to advance in 2016 and what role are we gonna play – all by His grace – in making that happen?

Thinking this way about time, a new year, and the Kingdom of God is relatively new for me. It wasn’t that many years back that I held a passive, pessimistic, preemptively culture surrendering perspective that is typical of professing Christians in America and throughout the West. But in recent years, as evidenced by things like this site, God has been pleased to provide me with a different perspective – a perspective aimed (albeit imperfectly) at actually taking up the Gospel-fueled Great Commission and advancing the Kingdom of God right here and now with whatever great or small tools Christ the King may have given to me and my family…all by His grace and all for His glory.

So what role will we play?

What role will you and I and my family and yours play in advancing the Kingdom of God in 2016?

There’s no way I’m even going to attempt to provide a comprehensive answer to that sort of question here, though I do hope to encourage you (and remind myself) of the importance of thinking that way about the time in which we’ve been purposefully placed and the Kingdom we’ve been commanded and equipped to advance by the Spirit of God within us.

I hope and pray that you and I both will apply that question and concept to the seemingly “little things” of daily life as well as the Grand Plans that we might have for specific enterprises in 2016. The more purposefully Kingdom-minded we can become here on January 1, the better off we will be to do what we’ve been called to do with and through the rest of 2016.

Everyone plays a role in the many battles to advance the Kingdom, of course.

Many professing Christians are dead weight, doing little beyond what makes them comfortable as they wait to be “rescued” (via rapture) from the consequences of their personal abandonment of the Gospel-fueled Great Commission.

Many other professing Christians actively oppose the advance of the Kingdom of God, particularly when it threatens (as it must) to invade and dominate the realms of law, economics, and education. These professing Christians will not have Christ to rule over them in detail in practice and, as such, make themselves enemy combatants in practice against the advance of His Kingdom.

What will our roles be this year in this context?

What will our roles be in this day’s and this year’s portion of the inevitable march through time towards the complete victory of God’s people by the power of His Spirit under the banner of His Gospel-fueled Great Commission?

While thinking big is in order here, never forget that the big things are composed of smaller, essential pieces. We are commanded and equipped by our Lord to take them all – great and small and everything in-between – captive to Him.

My hope is that each of you Brothers and Sisters who are reading this will survey the territory you’re in, the resources and talents that you’ve been given, and prayerfully ponder how to most surely and productively seize the Kingdom advancing opportunities that you and yours have been given. While I cannot possibly know or even begin to grasp around the edges of what He has planned through the use of His people today or throughout the rest of this year He’s given us, I am comforted and thrilled beyond expression at the knowledge that He does indeed have each of His people perfectly positioned and perfectly equipped to do what He has for them to do.

As for me and my family, your prayers and encouragement are more appreciated than ever.

2015 was our first full calendar year of near-daily focus on the Fire Breathing Christian mission. We’ve been nothing short of blown away by the feedback we’ve received from folks who’ve been encouraged and inspired by what God has given us to do, and we’re jazzed at the thought of continuing (and expanding, Lord willing) the FBC mission in the coming year. We’ve made very dear new (and eternal!) friends in this first year and we’ve seen meaningful early steps taken toward the vision we have for FBC in the long run. With two little ones (Rosie, who will be three in March, and Wolfgang, who will be one in February), a full time office gig that kicks into overtime-mode from mid-January to Mid-April, and a recent move into a rental home just completed, it’s been a crazy busy (and sometimes chaotic) time and looks to get even wackier in the coming months, but the work here has become a treasured labor of love that we know – thanks to you – is making a difference for the Kingdom of God.

Eyes are being opened.

Minds are being enlightened.

Worldviews are being restored.

We’re all learning and growing and advancing the Kingdom together, one supernatural salvation and grace-fueled act of obedience at a time, all by God’s grace, all for His glory, and all to our eternal benefit.

Thank you again for your grace, patience, and prayers. I’m hoping to finally get caught up on backlogged email and related items in the coming days, so an extra thanks goes out to those who have written in recent weeks but have not yet received a response.

May God grace His people with the passion, power, and opportunity to seize every hill on every battlefield placed before them in 2016.

Victory has been secured.

The Gospel-fueled Great Commission will conquer everything, reconciling God’s creation by the power of Christ’s work on the cross.

May God supernaturally inspire His people to believe this beautiful truth…and act accordingly.