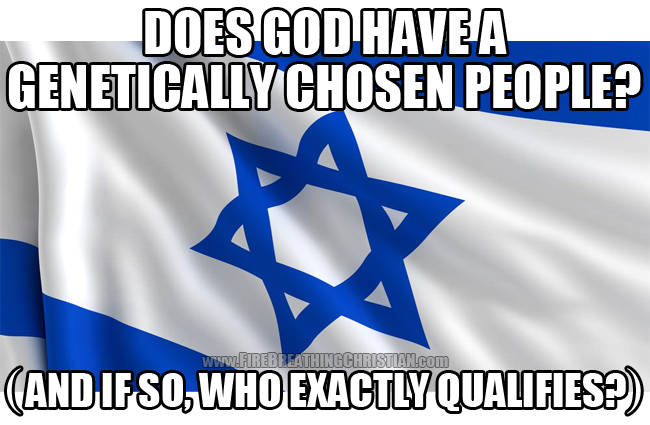 Wanna see the equivalent of a million megaton nuke go off in a crowd of professing Christians in 2016 America (especially those inclined to gather at Cruz rallies)?

If so, simply dare to even ask a question like, “Does God really have a genetically identifiable chosen people on earth right now?”

Then follow it up with something like, “And if so, exactly who qualifies?” or “Who’s actually in this group?”

Then watch the incredulous rage build (in some, not all)…and be ready to defend yourself.

The first problem with these questions, from the perspective of a great many professing Christians in America, is that anyone would dare to ask ’em in the first place.

We’re not supposed to think about (and biblically test) whether or not God has a genetically identifiable chosen people here and now on earth.

We’re supposed to assume it.

We’re not supposed to wonder as to how such a group, if it exists, is actually defined in any sort of even semi-detailed manner – which is necessary to have a distinct group in the first place. We’re not supposed to notice, much less be bothered by the fact that you can’t have a distinct group of people without identifying and applying distinct parameters to define who’s in and who’s out of the group in question.

There’s no way around this, and yet, when it comes to the claims of many professing Christians in America pertaining to the identity of “God’s chosen people”, these questions are never asked, much less addressed.

More often than not, they’re not even tolerated.

To even ask these vital questions, much less test them biblically as commanded by God, is to risk being auto-painted and shouted down by professing Christians as anything from an anti-Semite to a heretic.

This thoroughly pagan approach to silencing debate through pre-emptive shaming is something that cannot be allowed to stand.

So let’s ask – and strive to honestly answer – these questions, shall we?

Does God have a chosen people that are defined (or are definable at all) by genetics?

If so, who qualifies for inclusion in the group, and who does not?

What are the parameters?

Where’s the line, if there is one?

And if there isn’t a line, how can the group in question be considered distinct?

If they’re not distinct, how can they even be reliably identified?

Back when I uncritically believed in “God’s chosen people” as certain ethnic/genetic people like those composing much of the modern secular (God-hating) nation state named Israel, I never even thought to ask these questions. And nobody in the churches I grew up in ever brought ’em up either, lemme tell ya.

Now as I reflect and ponder these things, I am ashamed and compelled to repent of my past passive, unthinking embrace (and advocacy) of what sure seems to be a set of very suspicious claims and assumptions being made by many as to the nature of God’s covenant and the identity of His people here on planet Earth in 2016.

While I’m not aiming here to get into any of the various related debates that can (and should) be reasonably, respectfully, and vigorously pursued in light of this topic, I would like to remain focused on the simple questions posed here and ask for answers from my friends, Brothers, and Sisters, who presently hold to the view that God does have a genetically identifiable and physically distinct group here and now on earth as His “chosen people”.

I am not arguing that anyone holding such a view of “God’s chosen people” is somehow inherently not really a Christian. (Please see also: Never forget that apart from God’s grace you and I are complete morons.)

I am simply asking those who hold such a view to define it in some (at least semi-)substantive way.

If my great grandmother was an ethnic Jew, would I be qualified for inclusion in the “God’s chosen people” group?

Why or why not?

And what is the cutoff, if there is one, on the genetic/lineage side?

If the hypothetical great grandmother mentioned above was only half Jewish, would she still be one of “God’s chosen people”?

These are anything but trick or silly questions.

They are not peripheral or little things.

They go directly to the credibility of claims regarding a genetically/physically identifiable “God’s chosen people” here and now on God’s earth.

Out of love for all people and, above all else, Christ the Lord, I respectfully request your prayerful, thoughtful consideration of these important questions.

Please email, message, or respond to the original blog post with your thoughts.

Please help me (and other readers) to understand what the parameters are for inclusion in a genetically/physically identifiable “God’s chosen people” group here and now in 2016, if you hold to such a view of God’s chosen people.

Thank you for your grace, patience and interest in these things.

Thank you for proving to a watching world that we as Christians really can honestly, vigorously and lovingly (as Christ defines love) test and debate even challenging and cherished subjects like this by His grace, for His glory, and to the eternal benefit of His chosen people. 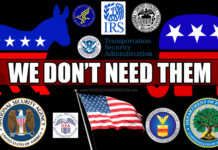 The One Thing They Can’t Allow Us To Realize: WE DON’T NEED THEM