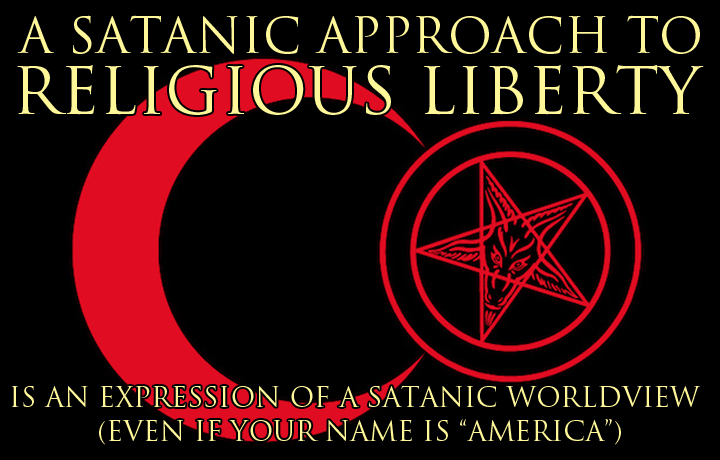 So, according to numerous reports, Satanists are openly advertising and planning (yet another) Black Mass in America, this time in the heartland state of Oklahoma. Before we get into the particulars of this installment of Black Mass Over America, let’s take a step back and get some perspective…

A long time ago, in a galaxy not so far away – our galaxy, actually – there was some clarity among the Puritans and Pilgrims who first settled America as to what religious liberty was and what it was not.

Their basis for this clarity?

The Word of God.

Believe it or not, the people who fled persecution to found what we now call America did not come to fight for the “right” of people to worship any god they chose. They came in support of the God-given right to worship Him in different ways according to the Christian principles of Christian liberty in religious practice – which, just to be clear, does not allow for or accommodate in any way the open worship of Allah, Satan, or any other false/wannabe god.

If we can just get that one point, we will be in a very good place to move forward in the productive consideration of this important issue…and we will find ourselves in open opposition to the prevailing (satanic) view on religious liberty as held by most professing conservative Christians in America (and, of course, all Satanists, witches, Muslims, etc.).

It’s really weird and sad to even have to point this sort of thing out, but in an America where a biblical view on religious liberty has been so thoroughly trampled out of the population, in large part through the propagation of satanic temples of Statism (public schools), these are the sorts of very basic steps that we have to take in order to even begin to properly address this issue these days.

Here in 2016 America the adoration and implementation of “religious liberty” not only directly opposes to the aforementioned Pilgrim/Puritan understanding of these things; it is in stark opposition to the Word of God that those Puritans and Pilgrims imperfectly strived to apply.

Yet these days in America the average professing Christian conservative will be among the loudest, proudest and most passionate defenders of a satanic approach to religious liberty.

This is something that we chronicle with some regularity here at Fire Breathing Christian, though not nearly as much as we could if we were merely keeping pace with the near-daily reports of open satanic worship and celebration in this land loaded with professing Christians who advocate satanic approaches to law, liberty, economics and education and then dare to wonder why the culture is going to hell on a rocket right before their eyes.

I know that it probably gets old to some, and I certainly do not enjoy the subject matter, much less the repetition of it, but there seems to be significant value in chronicling these events as they continue to unfold across this proud, unrepentant land, so that perhaps such reports might eventually be used by God to help convict America idolizers and defenders of satanic approaches to life, that we might repent of our rebellion and submit to Christ as King in practice. And even if such repentance does not come, there is also value to future generations in knowing that clear warnings were issued to the people who chose to disregard them and keep right on marching into darkness.

With that context established, here’s the latest…

As Christian Daily reported this week in Satanic ‘Black Mass’ in Oklahoma opposed by 100,000:

A Satanic group is set to verse a “black mass” at the Oklahoma City Civic Center Music Hall this August, but 100,000 people have signed a petition to have the gathering canceled.

Get that: A petition.

Conservative Roman Catholic organization Tradition, Family and Property (TFP) has forwarded the said petition in the hopes that the Satanic “black mass” could be stopped, just as Catholic protests have prevented a similar ritual from being carried out at Harvard before. The petition calls for the cancellation of the Aug. 15 event, which is deemed as offensive to Catholics all over the world.

“With my whole heart and soul, I express full, complete and vehement rejection of the satanic black mass scheduled at the Oklahoma City Civic Center on Aug. 15,” the petition reads. “I urge you to cancel this event which offends more than 1 billion Catholics worldwide, 200,000 Catholics in Oklahoma and countless more God-loving Americans. Sacrilege is simply NOT free speech,” the petition further states.

Without getting into the tragi-comedic overlap between the satanic Catholic mass and the satanic Black Mass, it is still interesting to note the blind, emotional, utterly subjective and legally baseless (from America’s temporarily allowed perspective, anyway) proclamation that Satanic religious expression is “NOT free speech”.

That is always the essential question to ask, and until our answer is “the Word of God” when it comes to law, we will find ourselves doing stupid little things like trying to stem the tide of Satanism, Islam, and the LGBTQRS movement with petitions.

The article went on to note that, while all of this is going on in Oklahoma, “Colorado middle schools and high schools have started allowing atheists and Satanists to distribute their literature . . . among the literature handed out to the Colorado students is a coloring book titled “The Satanic Children’s Big Book of Activities,” created by The Satanic Temple.

We covered the America-enabled Satanic Children’s Big Book of Activities a year and a half ago in Well color me satanic and call me America! (Or: How our cherished tolerance for false gods is killing us.)

Sadly, since that post was made, things only seem to have gotten worse. Professing Christians only seem to be digging in deeper to defend the satanic model of law now defining America, claiming to call upon God to save their idol (America) from the consequences of a satanic worldview rather than repenting of that worldview and turning to Christ as Lord in practice.

Even so, we will go on reporting and sharing these hard truths in a spirit of peace, joy, and confidence in the One who has perfectly positioned us here and now for such a time as this…and has already secured complete victory over every one of His doomed enemies.

Thank you for your continued prayers, support, and for all that you’re doing wherever God has placed you in this amazing Gospel-fueled, Great Commission-advancing adventure!