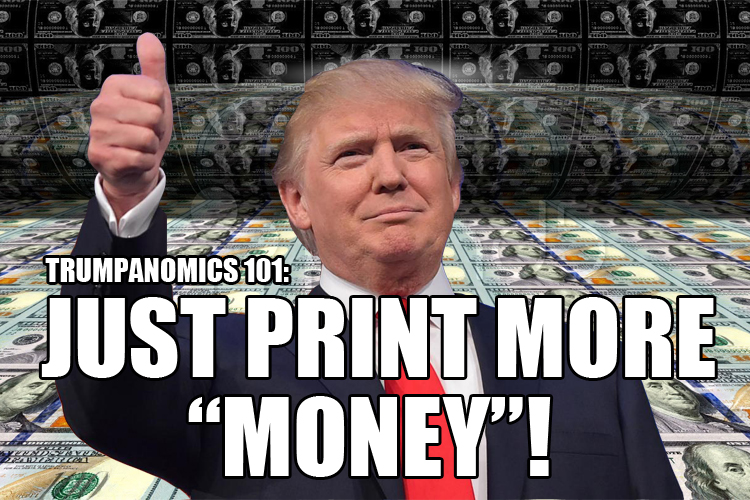 So how does the increasingly Orwellian American Welfare/Warfare State seemingly manage to go on and on suspending the God-ordained laws of economics?

How do we seem to hear more and more talk about how we’re “broke”, “out of money”, “deep in debt” and the like year after year while government power and programs only grow, grow, and grow some more?

How do seemingly unsustainable, unmanageable things like Social Security, public schools, giant armies, perpetual wars, massive police/surveillance state investments, unemployment benefits, Medicare, ObamaCare, and the endless list of programs used by the American State to “help”/enslave the American people not only go on and on, but grow at a staggering pace year after year regardless of how bleak economic realities are for those not atop the Corporate/State system of black magic fiat economics?

Well the answer is as obvious and simple as it is painful: They – the elites atop the whole nightmare – simply print/type however much “money” they want or need into existence so that they can then use it to effectively own and control the rest of us.

This is Economics 101 for Statists like the two who have been put up this time ’round for us to “choose” between by the Corporate-owned and operated political puppet show we are encouraged to sink our time, treasure and passion into every four years in America.

And Donald Trump has made his devotion to this fundamental of mass economic enslavement plain time and time again, most recently in an interview on CNN.

In a nifty little article entitled Trump On Debt Renegotiation: “You Never Have To Default Because You Print The Money”, ZeroHedge singled out the money quote as follows:

. . . the confusion about Trump’s intentions continued and ultimately led to his latest CNN appearance in which he explained what he meant earlier this morning.

“If interest rates go up, we can buyback debt at a discount if we are liquid enough as a country. People say I want to default on debt – these people are crazy. First of all you never have to default because you print the money . . .”

See how easy it really is for those at the top of the economic enslavement system?

They just “print the money” that they need.

It’s kinda like a video game cheat code, but for real life.

Who needs the God-ordained laws of economics when you can just print whatever you want into reality and use it to purchase everyone and everything beneath you, right?

This is how All-American Statists like Trump can make promises that things like Social Security, Medicare, and all of the rest of the satanic/Marxist programs that even most “conservative Christians” defend and cherish these days in America are “off the table” and “not to be cut”. These programs have become sacred to their addicts, after all (and as always intended). Their existence is a critical component in the ongoing and deepening mass enslavement of a proud and biblically illiterate people who are so profoundly confused as to think they’re “free”.

Free to print money out of thin air like the American Corporate State?

But just free enough to spend their lives chasing after the scraps of what the likes of Trump/Clinton & Co. routinely and effortlessly crank out of thin air.

That’s American “freedom” in 2016, and unless we finally repent and reject this satanic economic construct, it’ll get much worse from here.