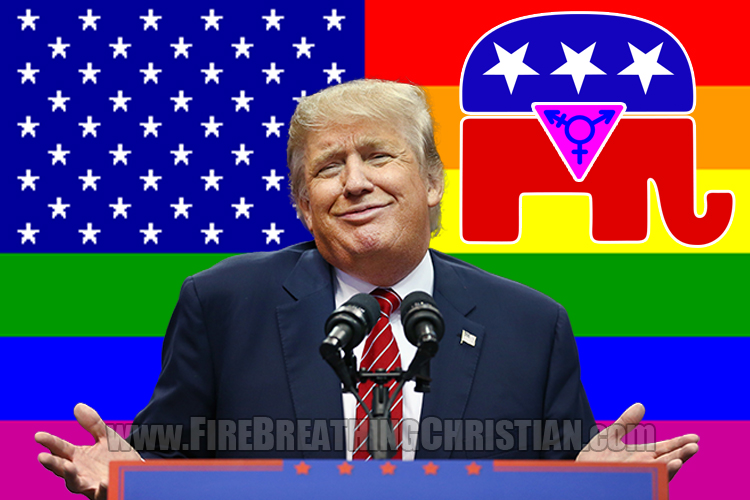 Ah yes, you can just feel the excitement…and taste the desperation.

Few things convey our culture’s proud, arrogant, defiant devotion to pride over repentance as loudly and as clearly as national level Republican Party politics, and as the great American slide into darkness picks up steam, the spectacle of Republican Party national conventions only becomes more and more surreal.

With repulsive regularity, the Republican Party now openly embraces and champions what it claimed only a few years back to “stand firm against”.

The “party of family values” is now a defender of gay rights and advocate of the LGBTQ movement.

The “party of the pro-life movement” routinely stacks the Supreme Court with people who champion the “right” to openly murder children in America.

No, seriously, the same people will let that line fly with regularity and to great applause: God bless America!

Land of the free and home of the NSA!

That is the GOP.

That is the “Grand Ol’ Party” that would have us “Make America Great Again” by clinging to our pride and openly trampling on everything God has said about life, liberty, justice, law, family, sexuality, economics, business, and everything else.

That’s who’s putting on another big show this week to once again sell Christian, among others, on the notion that the pursuit of greatness in God’s creation can and must be pursued apart from submission to Him as King in practice.

So it is in this context that we really shouldn’t be the least little bit surprised at recent proclamations from pagan conservatives that Donald Trump should be supported because he is “the most pro-gay candidate in American electoral history“.

In a lovely little article (enthusiastically shared by “conservative” sources, of course) posted over at Gateway Pundit entitled Pamela Geller, Milo Yiannopoulos and Geert Wilders to Headline Historic “WAKE UP” LGBT RNC Event, we get the following fabulous look at what GOP pride, liberty, and freedom look like nowadays in political practice:

Pro-Trump gay conservatives are hosting a “Wake Up” party next week at the Republican Convention in Cleveland.

Conservative champions Pamela Geller, Milo Yiannopoulos and Dutch Party for Reform leader Geert Wilders will rally the crowd for Donald Trump for President. Music will be provided by Cleveland DJ Mike Filly. The event will be held from 10 PM until 1 AM on Tuesday night July 19th at Cleveland State University. . .

Milo Yiannopoulos says he’s glad to support a candidate who does not take funds from regimes that kill homos.

“Some LGBTQQUIA “folk” are quivering with outrage and fear over the possibility of a Trump presidency. Idiots! Personally I think we need to add an S to that ever-expanding abbreviation — S for STUPID. Donald Trump is the most pro-gay candidate in American electoral history. . .”

The GOP has run the numbers, Christian, and its leaders are quite content (and surely relieved) to replace any principled Christians who walk out on the party with LGBTQ activists who are on the same godless, man-centered page as the typical Statist conservative Republican.

When it comes to law, family, sexuality, civil government, business and economics, the GOP is as LGBTQ-friendly and as Christianity-hostile as it gets.

That much has been made plain.