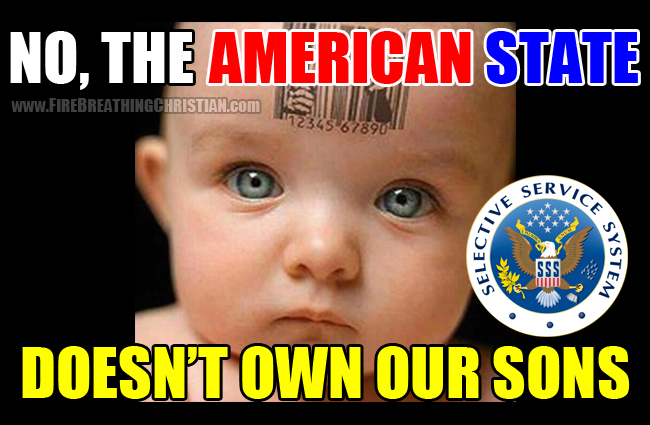 Does the American State own you or do you own you?

According to most American Christians, particularly those of a self-identified conservative bent, if you are an able bodied male within a certain age range (which is always adjustable, of course), the American State owns you. If you are an able-bodied male within certrain parameters (which is always adjustable according to the “needs”/whims/desires of The State, of course), the American state has the “right” to take possession of you as its property to use you as it sees fit in its various military adventures, compelling you to serve in its ginormous, globe-spanning military featuring a lesbian general and a new navy vessel proudly named after a gay rapist.

We think we’re free, we sing about our freedom, we take pledges to the Almighty, Indivisible State that “protects” our freedoms, and we get all uppity with anyone who says anything about how we’re not really very free at all and are getting less free by the second.

Newsflash: We can’t even own a home in America!

And now, thanks to things like the draft (for men and soon women, too), we don’t even own ourselves.

The American State owns everything…and everyone, including our sons, daughters, husbands, wives, mothers and fathers.

And “American Christians” are, by and large, pretty much fine with that.

One of the few things creepier and more disgusting than the thought of either President Hillary or President Donald (or whichever even worse “lesser evil” comes along after them)deciding to reinstitute that “treasured tradition” of America claiming ownership of its able-bodied males for use in its perpetual war machine via the draft is that most professing Christians just go right along with it, and happily so.

That’s how completely programmed we’ve become as a people.

That’s how completely we’ve been converted to the religion of Statism in practice here in America (all while claiming Christianity with our lips, of course).

So it is that Spirit-filled, biblically grounded Christians in America need to be bracing for some very specific storms that are likely to come soon – storms that will almost certainly include the American State seeking once again to claim full blown ownership over people, forcing them into the service (a practice known as “slavery”) of a godless, dying empire with the full, proud, and vocal support of most professing Christians in the land.

As their worldviews exist now, many of these professing Christians are very likely to be cheerleading (or otherwise enabling) the American State’s confiscation and bondage of people via the draft if and when that system is re-launched in the coming years, so we need to be ready to confront and correct these professing believers right now with the Word of God as we have the opportunity in the days before the greater storms of Statism arrive.

To that end, I want to share an excellent article entitled The Bible and the Draft by John W. Robbins.

Here are some excerpts (with bold emphasis added):

The federal government is again contemplating the conscription of young people for both military and civilian labor. The liberals are supporting “national service,” i.e. they advocate forcing young people to spend two or more years of their lives in some sort of “public service”-including, but not limited to, the military; and the conservatives are supporting the military draft, i.e., forcing people to serve in the armed forces. The liberals’ position is consistent with their other positions favoring unlimited government. The conservatives’ position seems to be inconsistent with their usually limited government views. What is the Christian position? Can the consistent Christian favor either the draft or national service?

Unlike either the conservative or the liberal, the Christian must derive his views on the morality of the draft and national service solely from Scripture, not from any theory of natural law or general notion of justice, but from the propositions and commands written in the Bible. The Christian position on the draft-as on all moral and theological questions-is based upon the principle of sola Scriptura, the Bible as the only and as the final authority.

The first of the many verses that are pertinent to a discussion of the draft and national service is the Eighth Commandment prohibiting theft. Two common misconceptions must be eliminated if we are to understand the meaning of this Commandment. First, the Commandment does not refer only to inanimate property. The Hebrew word is used in connection with both property and persons, and in Exodus 21:16 we read of “manstealing,” i.e., kidnapping, which is a capital crime. This commandment clearly forbids not only the theft of property, but also the removal of innocent persons against their will.

The second misconception is that the Ten Commandments, including this one, apply only to private individuals and not to governments. This notion, which has absolutely no foundation in Scripture, illustrates how far we have gone toward deifying government, for it is attributing divine qualities to rulers to say that they in their official (or private) capacities are exempt from the law. The Commandments, as both the Bible and the Westminster Confession say, bind all men without exception. Rulers and governments are commanded not to steal, murder, covet, lie, or do any other act prohibited in the moral law. Zacchaeus the tax collector stole from the people, and upon his regeneration he recognized his subordination to the moral law. King Ahab broke the Sixth, Eighth, and Tenth Commandments in desiring and taking Naboth’s vineyard. John the Baptist in Luke 3:14 specifically applied the moral law to an agent of the government. There is not the slightest hint in Scripture that governments are above the moral law. And that moral law, as we have already seen, includes a prohibition on manstealing. Yet what are national service and the draft if they are not manstealing? There is no moral distinction between the actions of a private individual who kidnaps a person and a government that drafts its subjects under color of law. Both actions are clear violations of the Eighth Commandment.

The article continues in examination of various Old and New Testament passages (including those in the Old Testament that some use to try to justify compulsory military service), before closing as follows:

Compulsory military service does not merely bring a danger of militarism; it is militarism. To adopt it in this country would mean that no matter how this war results we are conquered already…..

I am not arguing against preparedness….. What I am arguing against is compulsion, which I believe to be brutal and un-American in itself, and productive of a host of subsidiary evils.

Are you ready to confront and correct the gaggle of biblically illiterate, pop-culture programmed professing Christians who think the draft is just peachy (or good even)?

Are you ready to help the more seasoned, serious Christian who is just cloudy or confused on this vital issue? (After all, we’re all works in progress. We all have our blind spots.)

If not, get ready.

And begin helping others to see the light on this…before they become cheerleaders for a desperate (and desperately wicked) American State as it strives to confiscate our children to feed into its unholy perpetual war machine.