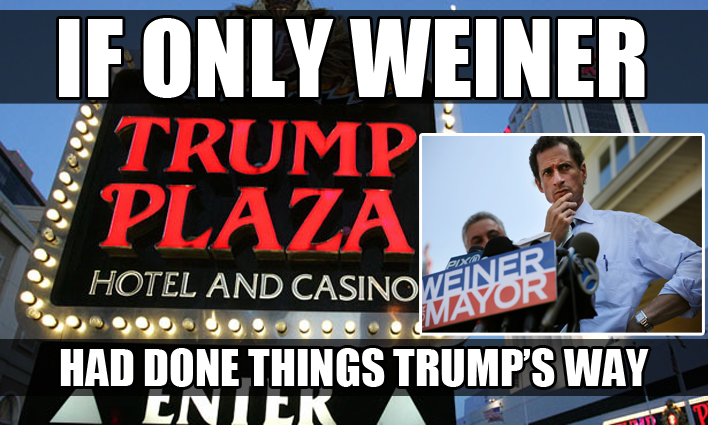 So Bill Clinton is about as open a woman user/abuser/hater as the world has ever seen, yet the guy is adored by tens (and possibly hundreds) of millions of loyal Democrats and Progressives the world over and rakes in boatloads of cash to simply speak to people.

Bill’s wife, Hillary, has enabled Bubba’s woman abusing/hating behavior for, well, pretty much forever, going so far as to feed inconvenient “bimbos” to whatever wolves she can find as needed, leaving a trail of raped, abused, assaulted, devastated women in Team Clinton’s wake while, like Bubba, making obscene fortunes through her connections and insanely lucrative speaking tours.

And on the Republican side we have Donald Trump, a man so open and proud of his “absolutely amazing” adulterous escapades, that he writes about them in his best-selling books, which are then used as yet another example of his general awesomeness and ability to “succeed” in life. Add these proud tales of adultery to his involvement in building, promoting, and profiting from various casinos (which sometimes host strip clubs), as well as his penchant for “trading up” wives so that he can have the latest Playboy-worthy model, and you begin to get a sense of the Sin City character of the man that the Republican Party has chosen to “Make America Great Again”.

So, in light of these fine examples, one can only imagine how Anthony Weiner must be feeling right about now.

If only he’d handled his desire to use women, trample virtue, mock marriage and indulge his lusts more carefully, he wouldn’t be where he is now. If only he’d have been a little more Clinton or a little more Trump instead of a little too much Carlos Danger, he’d be right there at the trough of power swilling with the rest of the pigs.

This is what makes Republican gloating over Weiner’s plight all the more comical (in a decidedly dark  and tragic comedic sense).

To hear Republican Trumpsters go on and on and on about Weiner while openly (and quite proudly) supporting The Donald is almost too much to believe.

And this is what even many “conservative Christians” do in 2016 America.

Are there differences between Trump and Weiner?

For one, Weiner is being (rightly) crushed for his rank adultery, while Trump is getting a pass from evangelical leaders like Jerry Falwell, Jr. and the millions who (for some bizarre reason) follow them.

Also of note is the fact that Trump is LOADED.

This equals success and power in America. Material wealth the likes of Trump’s inherently inspires the worship and adoration of Americans who have been conditioned to idolize such things and set aside any consistent, coherent biblical critique of their acquisition in the process.

Third, Trump is a Republican. Moreover, he’s the Republican nominee for President, which means that he is obviously a Christian of some sort as far as most “Republican first” American Christians define such things. Obviously, as a Democrat, Mr. Weiner gets no such leeway. Thus, his numerous and quite heinous sins of the past 5-6 years must be taken quite seriously as we assess his character…while the lifelong rank paganism of Donald Trump is “just what successful people often do here in the real world”.

If only Weiner had owned or promoted casinos with strip clubs and the like instead of sexting strangers via Twitter, he could be in a much better position right now.

And this has to be killing him.

To see the Clintons literally rape and pillage for decade after decade while Trump facilitates and indulges in vice after vice openly, proudly, and profitably for even more decades, and to see them both sitting at or near the pinnacle of power and public adoration at this very moment in spite (or maybe because) of it all must be weighing heavy on poor little Anthony right about now.

The inconsistency of application where tests of character, standards of virtue, and causes for outrage are concerned is simply staggering here.

That’s important for us to note as we watch this sad segment of the American Political Puppet Show unfold before our eyes.

God is telling us something here.

Why is Trump a man of vision and character that America needs to “make it great again”, but Anthony Weiner is just a creepy, lowlife, power-mad sexting scumbag?

What is character, anyway?

What is a marriage vow worth?

Is Donald Trump’s Sin City culture evil or is it not?

Is The Donald’s near lifelong promotion/expansion of Sin City culture all across America not at least in the same zip code of evil as Mr. Weiner’s Twitter sexting?

Obviously there are many differences between the two men and their situations, but is there not a whole lot of overlap?

I mean A WHOLE LOT…and in the worst possible areas.

Who has impacted the culture more over the past 20-30 years for the Sin City worldview?

To help answer that one, I offer for your consideration a recent article that explained how the Republican nominee has been able to spin an openly, proudly Sin City approach to life and business into a persona now synonymous with “success” and “making America great again”:

On the presidential campaign trail, Mr. Trump, the presumptive Republican nominee, often boasts of his success in Atlantic City, of how he outwitted the Wall Street firms that financed his casinos and rode the value of his name to riches. A central argument of his candidacy is that he would bring the same business prowess to the Oval Office, doing for America what he did for his companies.

“Atlantic City fueled a lot of growth for me,” Mr. Trump said in an interview in May, summing up his 25-year history here. “The money I took out of there was incredible.”

His audacious personality and opulent properties brought attention — and countless players — to Atlantic City as it sought to overtake Las Vegas as the country’s gambling capital . . .

Because The Donald made money!

Donald Trump darted beneath the 70 gold-tipped minarets and nine carved elephants that lined the roof, through the lobby and across the casino floor, seemingly oblivious to the spectators’ cries of “Donald, Donald,” and the gamblers clutching bricks of $100 bills at the blackjack tables.

It was April 1990, and Mr. Trump was officially opening his third gambling resort in Atlantic City, the biggest project of his career: the $1 billion Trump Taj Mahal.

“It’s truly going to be an incredible place,” he told reporters. “We’re calling it the eighth wonder of the world.”

The Taj was certainly of outsize proportions: Its 42-story tower was New Jersey’s tallest building, and the casino was the world’s largest.

In a remarkably short time, Mr. Trump had become a commanding figure in Atlantic City, with his casinos accounting for nearly a third of its gambling revenues and employing more than 8,000 people.

But look at all of those JOBS!

Look at all o’ that MONEY!

That’s what we want. That’s what most American “conservative Christians” want.

They want good jobs so they can have more money so they can buy more stuff and live in more comfort and go to church on Sunday and send their kids to public schools and listen to talk radio for worldview formation and keep right on pretending to love Jesus while dismissing Him as Lord over their politics, economics, law, and education at every turn.

This is the America that “American Christians” like Jerry Falwell, Jr. & Pals has given us.

Barring our repentance, it only gets more ridiculous from here.