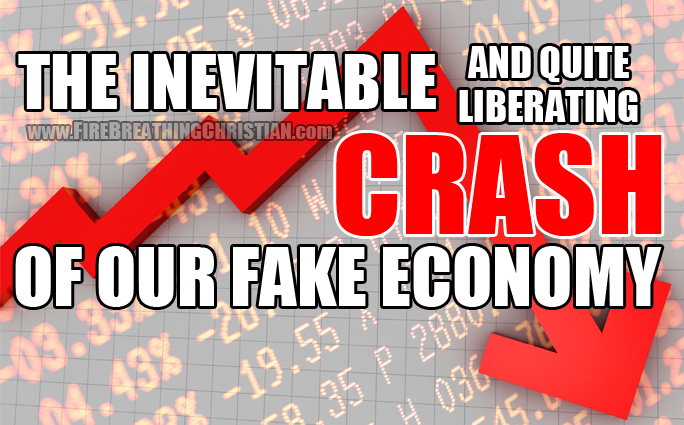 Monopoly Money dollars made up out of thin air and cranked out by the trillions in order to preserve the illusion of legitimacy in our markets, government and politics.

Unending bailouts of “too big to fail” businesses and government programs.

This is the utterly farcical economic construct under which we’ve allowed ourselves to be placed.

And how does such a construct end?

As with any approach taken in direct opposition to the reality-defining Word of God, our long running pursuit of satanic economics is destined to fail. It’s guaranteed to die.

And while the death of our system may deeply wound a great many people in the short run, the coming crackup represents a beautiful (and necessary) step toward infinitely better possibilities that can only exist on the other side of the death of the satanic fiat economic system under which we now live.

They do not exist now.

They cannot exist in a world pinned to and based upon fiat currency. When one group has the power to create wealth magically out of thin air by simply typing dollars (or euros or yen) into reality while the rest of us have to spend our lives chasing after tiny micro-portions of what has been effortlessly crafted out of nothing by the self-appointed elites above us, there is no such thing as a free market. There are only artificial, controlled, contrived markets driven, defined and dominated by the production and distribution of fake money.

How about reality-based pricing for things like labor, homes, stocks, and pretty much everything else?

You can’t have that in a fiat economic system either.

When fake money can be (and is) printed and typed into existence by the trillions in order to artificially inflate select asset bubbles as deemed necessary by the money-printing powers that be, you can never even discover, much less act upon the true price of the artificially inflated items in question.

Our fiat economic construct has to break and go away before any true, lasting and legitimate economic liberty will ever be attainable in America or anywhere else.

In this context, the inevitable crash of our current economic construct is a good thing.

While the pain of our longstanding dependence and enabling of a thoroughly satanic economic system will be significant, the opportunities for true economic liberty that will at last be made possible for the first time in many lifetimes on the other end of that collapse is good reason for hope and optimism.

In the meantime, we need to be about the business of preparing as we are able and encouraging others to notice the water now pooling on Titanic‘s deck.

To help with this, here are a couple of good reference point articles published recently at ZeroHedge. First, as posted on Monday in Trump Slams Yellen: The Fed Has Created A “Stock Bubble” And “A False Economy” To Boost Obama, we got a glimpse into some of the partial truths that are being acknowledged and pitched by Donald Trump:

One month ago, Donald Trump urged his followers to sell stocks, warning of “very scary scenarios” for investors, and accused the Fed of setting the stage for the next market crash when he said that “interest rates are artificially low” during a phone interview with Fox Business. “The only reason the stock market is where it is is because you get free money.”

Earlier today, speaking to a reporter traveling on his plane who asked Trump about a potential rate hike by the Fed in September, Trump took his vendetta to the next level, saying that the Fed is “keeping the rates artificially low so the economy doesn’t go down so that Obama can say that he did a good job. They’re keeping the rates artificially low so that Obama can go out and play golf in January and say that he did a good job. It’s a very false economy. We have a bad economy, everybody understands that but it’s a false economy. The only reason the rates are low is so that he can leave office and he can say, ‘See I told you.'”

He then lashed out at Yellen, whom he accused of having a political mandate when conducting monetary policy: “So far, I think she’s done a political job. You understand that.”

His conclusion: “At some point the rates are going to have to change.”

Indeed they will, and that’s precisely what almost every bank, from Goldman yesterday to Citi today, and many others in between, have been warning about in recent months.

Until recently, Trump’s latest anti-Fed outburst would have been swept under the rug as just another example of the deranged ramblings of an anti-Fed conspiracy theorist (trust us, we’ve been there). However, considering the spike in anti-Fed commentary in recent weeks coming from prominent, and established institutional sellside analysts all the way to the WSJ, it may be that Trump was once again simply saying what everyone else thought but dared not mention.

He doesn’t want the fiat system to be done away with.

He just wants it tweaked some.

He wants it strengthened, if anything.

Then yesterday in Marc Cuban: “I Have No Doubt The Market Tanks If Donald Wins”, we saw how another billionaire beneficiary of the fiat fraud has reacted to Trump’s thoughts:

. . . in the latest escalation between Donald Trump and the “political” Fed, the Republican candidate said that the Fed is “keeping the rates artificially low so the economy doesn’t go down so that Obama can say that he did a good job. They’re keeping the rates artificially low so that Obama can go out and play golf in January and say that he did a good job. It’s a very false economy. We have a bad economy, everybody understands that but it’s a false economy. The only reason the rates are low is so that he can leave office and he can say, ‘See I told you.’“

. . . Still, Trump’s assessment was simple: the “bubble” which is the stock market, will eventually crash, which is why a month ago he urged his supporters to sell stocks, warning of “very scary scenarios” for investors, and accused the Fed of setting the stage for the next market crash. . .

And confirming that it is now all about the stock market, none other than Trump’s most prominent non-political nemesis, Marc Cuban appeared on Fox News earlier today where he said that he has his “Trump hedge on”, adding that “in the event Donald wins I have no doubt in my mind the market tanks…. If the polls look like there is a decent chance that Donald could win I’ll put a huge hedge on that’s over 100% of my equity position, and my bond positions as well, that protects me just in case he wins.”

So to summarize: i) we are now in a bubble, but ii) don’t admit that or the market will crash resulting in a Hillary loss, and iii) the market will crash once the political support for Obama is pulled by Yellen should Trump win, something Cuban is now hedging against, only he does so by pulling the “Brexit card” and hopes to spook investors-cum-voters not to vote for Trump unless they want their stocks wiped out.

In short, the narrative is now set where the only “good” outcome for markets is a Hillary victory, which sends stocks to a new all time, if “bubbly” and “artificial” high. Then again, let’s recall how all prominent “experts” predicted that a Brexit vote would lead to an immediate recession for the UK. Meanwhile, we have all seen the amazing rebound in most UK sentiment indicators post Brexit, not to mention the unprecedented surge in UK stocks.

This is where we’re at: Billionaire beneficiaries of an artificial, satanically inspired economic construct arguing and posturing over which approach to satanic fiat economics is best.

Those atop the System of systems, of course.

Which is why they will do anything and everything within their power to prop the whole thing up.

But it won’t work.

Our economic Jenga Tower of Babel will fall, as it must.

Our satanic approach to economics will inevitably come crashing to the ground.