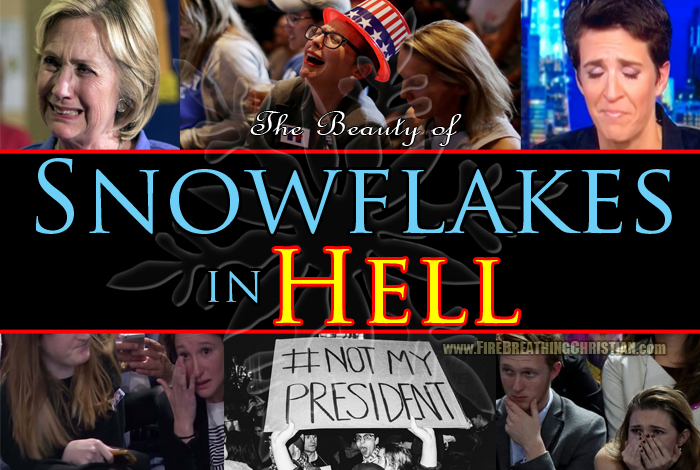 Okay, first off, before we even get going here, despite what you may think the title implies, this post is not at all about me saying or discussing how I actually want any actual living person to actually go to actual Hell. I do not. I hope and pray that God will grace others with the same supernatural, unmerited salvation that He’s chosen to grant me.

What I am hoping to shed some light on here is the tragi-comedic (and even quite practical) value of watching the foolishness of the world make itself plain in the form of millions of Precious Snowflakes melting in the hellish flames of political defeat.

The comedic part is hard to miss.

Wailing, distraught “experts” littering the ruins of mainstream media trying to explain how practically everything they told us over the course of the presidential campaign was, in a nutshell, garbage.

And then there are those darling Precious Snowflakes dominating college campuses, sucking their thumbs as tears stream down their precious little faces while diving into their safe spaces, hoping that a few hours fondling Play-Doh or working through an “adult” coloring book will help to distract them from the living hell that is Hillary’s loss of the presidency to Donald Trump.

Yeah, there’s no denying it: This stuff is fun to watch.

Sad and profoundly disconcerting, too, but a whole lotta fun nonetheless.

To watch these reactions from gangs of thoughtless, emotion-driven drones who, just hours earlier, had been pompously proposing that Trump, “when he loses”, would probably not take it well and might even contest or deny the results of the election – to watch those people react as they have here in the real world after Hillary lost has been nothing short of spectacular, hysterical, and awesome in general.

But there’s something much more important and valuable to touch on here than just the knee-slapping, laugh-’til-you-cry reaction that any sane, rational person might have to the prancing, pouting parade of melting Snowflakes enduring the hell of a Trump win.

One valuable bit is this: If this is what we’re up against – if this sort of hapless, clueless, emotion-driven drone thing (on both the pagan political Right and the pagan political Left)has become the norm (and it has) for those advocating (and depending upon) the American System of State-managed religion (State-Supervised Polytheism), education, economics, perpetual welfare, perpetual warfare, “gay marriage”, “legal” child sacrifice, and every other overtly anti-Christian thing America has come to stand for – then we, God’s people chosen to expand His Kingdom here and now on the portion of His earth presently known as America, are in very, very good shape.

I mean, just look at them, these products and slaves of a System of systems pathetically attempting to rebel and make war with God.

And their precious little bubble world is popping around them, which makes them terribly, terribly weepy. And pouty. And sad; very, very sad.

So it’s not like we’re exactly facing the hordes of orcs that Frodo & Company had to deal with. We’re not up against a well oiled machine composed of hardened, serious, sober-minded tacticians skilled in the art of warfare of any meaningful kind.

We’re mainly facing the wrath of a bunch of infantile girly-men (and male-ish girls) who are big on pride, bigger on arrogance, and very, very light on substance, strength, intelligence, and wisdom.

If ever there was another good reason not to be afraid of our enemies as Christians, then these hordes of crying, collapsing Precious Little Snowflakes melting down all around us ought to fit the bill.

So, in this context, I think it’s both fair and encouraging to note that there really is a certain beauty to Snowflakes in Hell.

Now let’s hope, pray, and work toward God’s use of us this situation to save these Snowflakes and expand the Kingdom.

Let’s tear down every idol and pillage every safe space.

America won’t be either.

But with Precious Snowflakes like these standing in our way, something tells me that victory can come much more quickly than we’ve allowed ourselves to believe possible.

So don’t fear the Snowflakes.